Quote of the Day: Poynter did an incredibly sloppy hit job on sites it deemed “unreliable” and is now apologizing for it. How the organization’s rep will ever be the same is anyone’s guess. Here. (RELATED: Poynter Shelves Blacklist Of Unreliable News Outlets)

Mood: “At this rate I’m never gonna make it to yoga.”

On his online live broadcast Thursday, Infowars’ founder Alex Jones was complaining about people getting into his devices as well as Facebook and banning Jones and Infowars. Twitter banned Jones and Infowars last September. Facebook and Instagram banned Jones and Inforwars on Thursday. He went off on CNN media writer Oliver Darcy, saying, “Dude, get out of my underwear drawer.” How did he make that association? He calls CNN “monsters” who are “licking their lips” over Jones being censored.

Jones called the banning “Adolf Hitler’s wet dream.” He urged viewers to buy his products, which include “Survival Shield” vitamins. “This is total war, folks, you need to buy the products,” he stressed in his gravel voice. At another point in the broadcast he said, “It’s not fun to be banned. But I know how to make lemonade.”

He also mentioned, however jokingly, that the lawyer for Twitter is named “Vagina.” Her name is Vijaya Gadde and she Twitter’s” global lead for legal, policy, trust and safety.”  (RELATED: ‘Day Of The Long Knives’ — Conservatives Condemn Latest Facebook Bans)

Katie Couric is ecstatic that Jones has been muffled. In her morning newsletter she wrote about Jones’ behavior toward grieving Sandy Hook families who had to deal with Jones calling the incident a hoax. Couric wrote, “Retraumatizing the families is disgusting and unconscionable and I’m glad Facebook finally acted.”

More on Jones’ war against Oliver Darcy… In 2018, Jones harshly confronted Darcy in the Longworth House Office Building on Capitol Hill for thought policing people and for being anti-American. He said Darcy came from the “loins” of Glenn Beck since Darcy formerly worked for TheBlaze. Jones looked into Darcy’s pupils and said he had  the”eyes of a rat” and called CNN the “Criminal News Network.” Jones remarked, “just look at this guys’ eyes, man. … He’s even more evil looking in person” And then looking at him directly, he told Darcy, “You’ll never have millions of fans and followers. You’ll never be loved. …Just look in those eyes. The hunger to deceive America.” Darcy didn’t react much. “Good seeing you,” he said. “Anything else you’d like to say?” When Jones tried to question him, Darcy replied, “I’m not doing an interview with you.”

Darcy’s reportage on Jones Thursday was straightforward news coverage. In 2018, however, Darcy’s coverage of Jones was more pointed. He wrote that Jones was a “conspiracy theorist” and part of a “fringe media organization.” CNN had conducted what it called “an investigation.” Darcy reported that Jones’s Twitter accounts had repeatedly “violated” Twitter’s rules. 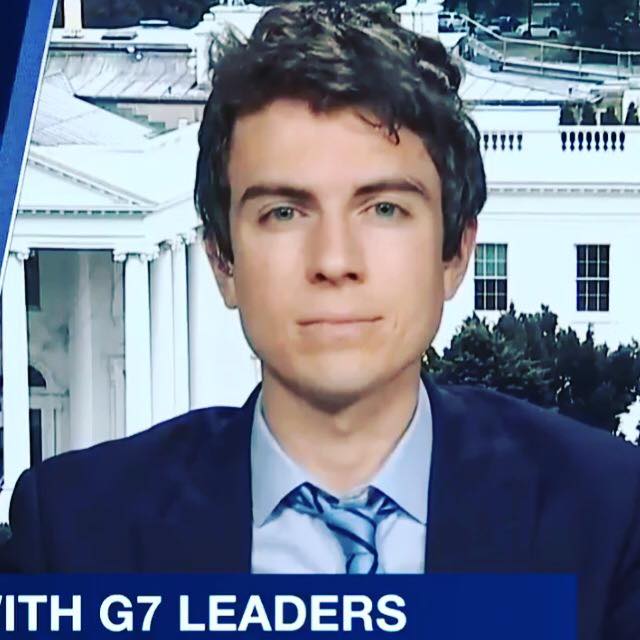 Spectator USA has just hired Curt Mills to be its new Washington Editor. Mills is a 2018-2019 Robert Novak fellow. He’s working on a project about President Trump‘s foreign policy. He’s a native Washingtonian. He cut his teeth in journalism at the Washington Examiner and U.S. News & World Report. He currently works for The National Interest. His beats include the State Department, National Security Council and the White House. Mills graduated from the College of William & Mary in 2013.

Dominic Green, who worked at the now defunct The Weekly Standard, is becoming the Life & Arts editor. He’ll be on the non-Washington beat.

Asked if he was thrilled about these changes, Freddy Gray, deputy editor of The Spectator and Spectator USA, replied, “I’m THRILLED.”

Less dryly, he said, “Curt is a very bright and brilliant young man — a real talent. We are all delighted that we have found him. He’s exactly the kind of person we need to take us to the next level as we expand our U.S. operations.”

Gray added, “if you can make me sound less like a corporate twerp that would be appreciated.” I told him I’d see what I could do. “Seriously, though,” he said, referring to Mills, “he is very good.”

Mills told The Mirror, “I think there continues to be a need for an essential center-right voice in this unique moment and city remade by Donald Trump. Although I’m an American, to the extent that a British touch can add to the conversation, I think that’s wholly welcome and I can’t wait to get started.”

“Laura Loomer is now basically making thinly veiled suicide threats because of the way she has been treated. And many on here will laugh. Yet we’re the “hateful” ones. OK. I hope Laura is going to be fine, her friends should check on her.” — Paul Joseph Watson, a former Infowars reporter, who has been banned from Facebook along with Loomer and ex-Breitbart News tech editor Milo Yiannopoulos.

Laura Loomer texts me this after her social media bans today:

“What’s the point of life anymore? … I’d rather kill Myself than to let them take the victory lap.”https://t.co/Z66gUcQLhT pic.twitter.com/w9LM0A1ZxG

A picture is worth a thousand words…

Is there a reason she’s wearing a crown?

It was a privilege for my daughter @CissieGLynch and me to be at the White House this evening for a #NationalDayofPrayer dinner hosted by @POTUS @realDonaldTrump & First Lady @MelaniaTrump. 1/2 pic.twitter.com/3wTVWIBmfP

Joe & Mika Scarborough and pals are trying to “rehab” Mark Halperin’s career… As reported by The Daily Beast, newsies like Joe Scarborough and wife, Mika Brzezinski and CNN’s Michael Smerconish are acting trying to help him get back on the horse (so to speak) after he acknowledged that he behaved in extremely creepy ways with women while working at ABC. In a recent SiriusXM interview with Smerconish, the host went unbelievably easy on Halperin, who basically compared himself to a murderer trying to re-enter society.

In a statement to The Daily Beast, he said: “I am deeply sorry and hope to have a chance to apologize directly to those I treated badly. It is the right and necessary thing to do. I cannot imagine how difficult this experience has been for them. I hope this will be a further step in my continued efforts to fully comprehend and make amends for the pain that I have caused.”

The Daily Beast story by Max Tani and Lloyd Grove has some juicy new details on Halperin’s carefully choreographed plan to return to political journalism. Here. (RELATED: Mark Halperin Is Really Sorry He Sexually Harassed Those Women, But More Importantly, You Hiring?)

By the way…the ladies of ABC’s “The View” have a chance to stop bitching about Trump and ask Joe and Mika why they are so intent on rehabbing Halperin. They are scheduled to appear on the program TUESDAY, which will require them traveling from their Florida beach home to New York, unless they appear remotely in front of a fake Capitol and White House.

CBS’s Gayle King and Norah O’Donnell really allegedly despise each other. Except their reps say this is untrue — they really allegedly love each other. Hmmm … “They’re both so horrible,” a media source told The Mirror. I think one thing everyone knows, getting on Oprah‘s bad side is a bad idea. Here.

FNC’s Laura Ingraham goes after Sen. Mazie Hirono: “Hawaii should ask that Senator @maziehirono return her salary, with interest. She’s embarrassed herself and the state today with her unhinged, disrespectful ranting.”

Unexpected friends in high places… Michelle Obama is besties with Kathleen Biden (you know, the ex-wife of Hunter Biden, whose brother, Beau, died of brain cancer. After his death, his widow, Hallie Biden, took up with Hunter, leaving Kathleen in the dust.) Now that Hunter and Hallie are Splitsville, Kathleen is hanging out at SoulCycle with Michelle and, at least as the optics go, she’s happy and dating someone else. Just so much happiness to this story. Here.

The Royals have very screwed up relationships with one another. Here.

WTH? A musician claims he “slid his penis” against Trump two decades ago. It was drunken, not sexual. Here.

Roland Martin, host of “Roland Martin Unfiltered,” has advice: “Folks, never forget the people who have stood by this immoral president. When he is no longer in the Oval Office, the moment they attempt to speak of morals, values or character, just show ’em the hand – and the tape. They’ve forever given up their ability to question ANYONE else.”

Patrick Howley gives a nod to homeless people and bullhorns

“With our people getting banned, and we’re all shadowbanned, we should use social media much like a homeless man on the street with a bullhorn. Say whatever you think, because it might be the last thing you get to say. If people unfollow you, fine. Tell them to go watch ‘The View'” — Patrick Howley, EIC, Big League Politics.