Several establishment media outlets have yet to update articles that claimed a pregnant Palestinian mother and her baby were killed by an Israeli rocket over the weekend, even though the story has since proved false.

The deaths were a part of recent tensions that have seen hundreds of rockets being fired from Gaza and an Israeli retaliation, in which 27 people were killed and hundreds injured.

Among the casualties were a pregnant Palestinian mother and her 14-month-old child, whose deaths were widely reported to be at the hands of the Israeli military.

“The death toll has risen in the latest wave of cross border Israel-Gaza violence. The Palestinian Health Ministry reported Sunday that nine Palestinians, including a pregnant mother and her baby, were killed in retaliatory airstrikes, according to NBC News,” The Daily Beast wrote, which is linked to a now-deleted story on their website. 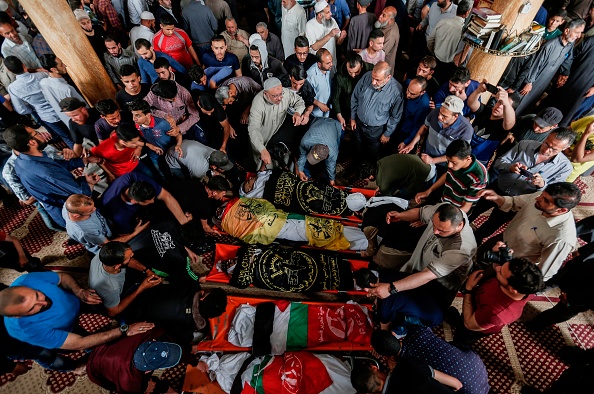 Palestinians gather around the bodies of people who were killed in Israeli strikes the previous day, during a funeral ceremony at a mosque in Beit Lahia, in northern Gaza Strip on May 6 2019. (MAHMUD HAMS/AFP/Getty Images)

CNN has an article on their website with a headline, “250 rockets fired from Gaza at Israel; 1-year-old child among those killed in retaliatory airstrikes,” which was published Saturday.

A pregnant Palestinian woman and her baby niece were killed in Gaza – do you condemn their deaths and their (Israeli) killers, Senator? If not, why not? https://t.co/ce51aRodlR

“Fighting between Israel and Hamas has escalated, with reports that 6 Palestinians, including a baby, have been killed by air strikes on Gaza and one Israeli killed as 450 rockets and projectiles were fired into Israel,” Washington Post’s Middle East editor, Alan Sipress tweeted, which was first reported on by The Blaze.

More information about their death has been released by the Israeli Defense Force and a local news organization and it has shown that these deaths were caused by a Hamas rocket that didn’t reach Israel.

“A leak from the heroes of the [Islamic Jihad’s] Sarayat al-Quds (Jerusalem Brigades) on the circumstances of the death of the baby Saba Abu ‘Arar indicates that a rocket of the resistance exploded inside the family’s home due to a technical failure, and prematurely exploded,” Hamas’ al-Risala News reported, according to The Jerusalem Post.

“There is a claim that the technical failure was caused by low-grade explosives in the rocket,” they added, before deleting it shortly after it was published. “There is no doubt that the baby’s death has nothing to do with the enemy’s [Israel’s] planes.”

The Telegraph Middle East correspondent Raf Sanchez wrote on Twitter, “‘We can now confirm that they were killed by accident as a result of Hamas fire,’ an IDF spokesman says.”

None of the articles listed above have issued a retraction or an updated.