Some socialists in America think conservatives are “f*cking terrified” of their ever-growing movement, and they have one simple message: Socialism is on the rise in the U.S., and conservatives can’t do anything to stop it.

A ragtag group of socialists gathered recently to celebrate their rising political clout at a May Day strike in Washington, D.C.

The strike, hosted by D.C. May Day, an organization sponsored by Black Lives Matter, was smaller than expected, bringing about fifty strikers in the event’s first hour.

The majority of the crowd did not want to talk to the Daily Caller — or they were open to talking until notorious antifa activist Lacy MacAuley convinced them that we were trying to “entrap people.”

Only drawback was four Daily Caller reporters who showed up at our festival to harass people and basically argue about socialism.

These right-wing hacks attacking socialism is a great indication that radical theories are gaining ground.

We are that subterranean fire ???? pic.twitter.com/eeaFQv9ceL 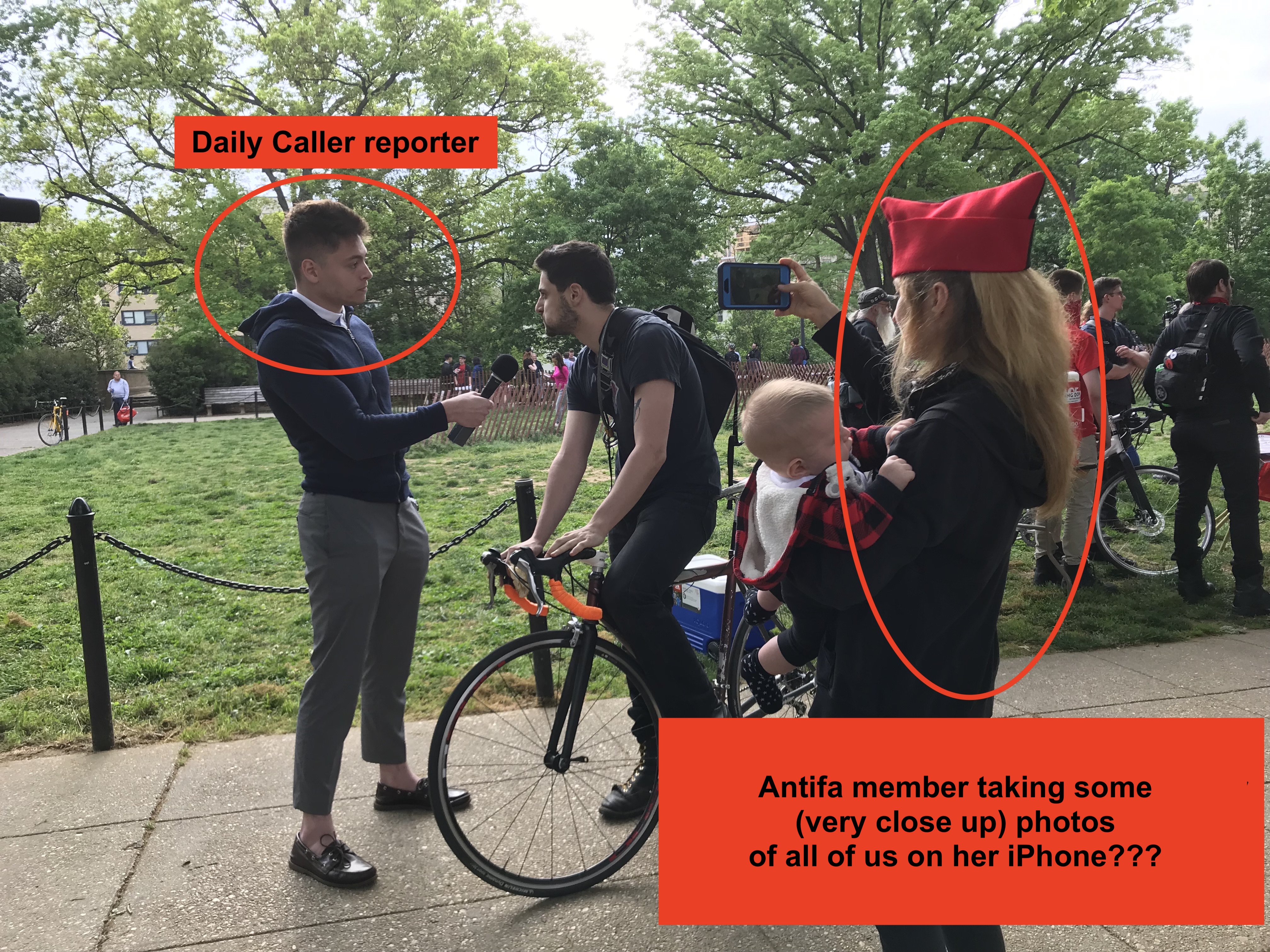 The Caller at the DC May Day strike, filmed by Lacy MacAuley

The first person we spoke to, however, had no problem talking to us because he thinks the Caller is “hilarious.”

He told us with a mouth full of bagel that he decided to attend the strike because he is a “Posadist,” probably sarcastically, though Posadists have celebrated May Day for decades. Posadism was founded in the 1960s by Juan Posadas, an Argentine Trotskyist who believed that space travel can only be accomplished through socialism, aliens only want to communicate with communists, and that, together, aliens and communist humans will eventually bring a revolution to Earth.

“Basically, what’s going on is: We need to bring about alien contact because, basically, in outer space, they’ve already established socialism. You know what I mean? So that’s what we’re going for.”

On a more related note, he said Republicans are blowing socialism out of proportion because they “love scaremongering” and telling their base that “Bernie, Warren, whatever — social Democrats are blowing it.”

“I think that’s great,” he continued. “Keep saying that. Keep bidding 100% against it. Because the polls show people like it. You guys must be f*cking terrified about how Bernie’s polling.”

A more serious and substantial response we received to the question, “Why are you here today?” came from a man named Ross with shoulder-length hair wearing a motorcycle jacket.

He told the Caller:

I am here to support the rise of socialism … in the United States, and what that means to me is: We really need to look at social causes in the United States, whether that be mass incarceration, climate education, the rising cost of healthcare — and we need to address those social issues. ‘Socialism,’ to me, is an umbrella term that encompasses a lot of things. Some people would strictly say it only means when the workers seize the means of production. That’s a very narrow definition … but, you have different groups here supporting socialism in many different ways, and I’m here to support their cause.

He also said conservatives may not be making socialism sound more dangerous than it really is, explaining that it depends on a party’s definition of the word “dangerous”:

If you define taking power away from corporations and the 1% and giving it to people [as dangerous], then yes. It is very dangerous. If you consider that … no longer will the [amount of money] you have equate the amount of speech you have — say, if we overturned Citizens United — that is very dangerous. GOP typically represents more corporate interests, so, to them, no. Maybe not. They are totally representing how dangerous they believe socialism really is. And to their voters and their constituents, they could be totally valid.

“Now, to your average American person,” he continued, “having universal healthcare, or a better educational system or lowering rates of mass incarceration, decriminalizing drug use — are all those things bad? No, absolutely not. And in that particular case when they say socialism will destroy America, yeah, they’re blowing it out of proportion. But it depends on who your audience is.”

He said he identifies not only as a general socialist but a Marxist syndicalist, saying, “I believe in a combination of things. … I’m also a civil libertarian. I’m a big proponent of free speech — free expression.”

Another soft-spoken tech worker in a “Denver” hat told us, “I’m out here cause it’s May Day, and this is all for labor rights and I support workers.”

He said socialism is on the rise in the U.S. because “you didn’t really see rallies like this in the 80s. Reagan did a good job of breaking labor’s back, so it just takes a while … and when you have income inequality like you do, you have stronger solidarity — people joining together — because they’re all starving. They need food. They need to work. The rich keep getting richer and the poor keep getting poorer.”

“I think socialists are probably Republicans’ worst nightmare,” he added. 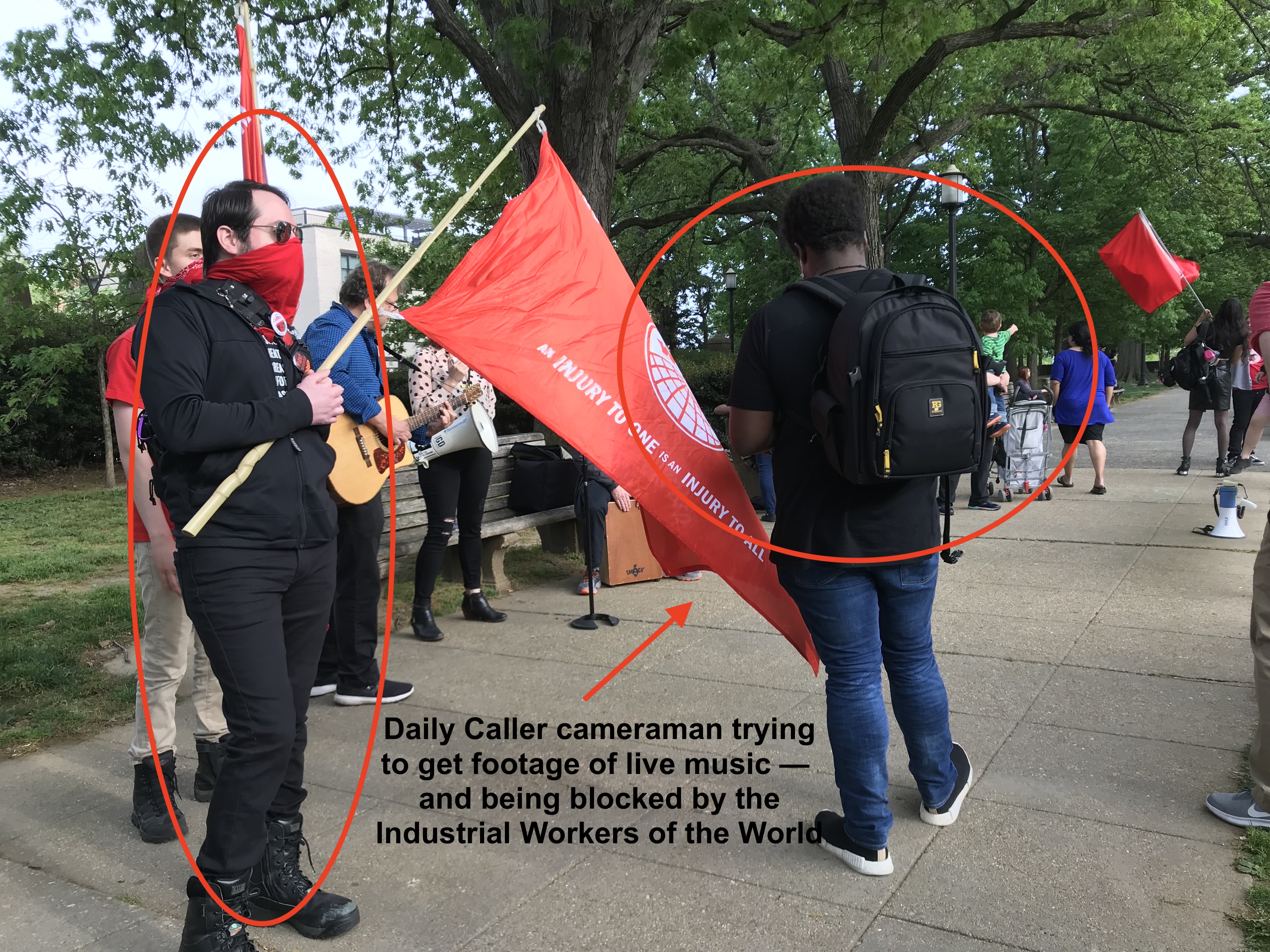 The Daily Caller at the DC May Day strike

One member of the Industrial Workers of the World booth said he was at the rally because he was “supporting workers’ rights and the eventual destruction of the far right.”

He said socialism is growing in the U.S. is because there is an increase in activity among the party, saying, “There’s an increase in labor strikes and movements and other various things like that, but I have to go before you all continue to [publish] this interview and probably write a scathing sensationalist article about me.”

But he batted away the idea that conservatives over-emphasize socialism, saying simply, “I think the GOP are pretty much controlled by far-right fascists now.”

No more responses were forthcoming.

D.C. May Day’s website “about” section reads, “For the rich, every day is a holiday. The corporate bosses enjoy lives of comfort and security by exploiting our labor, debt and hardship. May Day is OUR holiday. A day for the working class to come together and recognize the achievements of our labor and continue the fight for a better future.”

The purpose of D.C. May Day’s strike, in their words, is to “demand political power for the working class”; “smash racism, sexism and fascism”; “stop mass deportations”; “end mass incarceration”; “oppose imperialist war”; “defend the earth and its resources”; “fight for health care, education and a living wage for all.”

While May Day worker protests and rallies have lost popularity in the U.S. in the decades since the Cold War, some socialist and anarchist groups — including Antifa — still celebrate the holiday in cities across the country.