Several groups in the anti-Israel boycott, divest and sanction (BDS) movement operating in the United States have ties to Palestinian groups on the U.S. State Department’s list of designated terrorist organizations, a Daily Caller News Foundation investigation has found.

The BDS movement aims to politically and economically isolate Israel at the international level in order to advance Palestinian political objectives.

Ties between BDS organizations operating in the U.S. and Palestinian terror groups include: BDS leaders coordinating with the Popular Front for the Liberation of Palestine (PFLP), officials in BDS groups whipping up public support for terrorists, and a U.S. nonprofit reportedly facilitating tax exempt donations to a Palestinian coalition that includes multiple terrorist organizations.

Samidoun is a pro-BDS Palestinian activist group operating internationally, including within the U.S. The group has extensive ties with the PFLP, TheDCNF’s investigation found.

The PFLP has been on the State Department’s list of foreign terrorist organizations since 1997 and its members have claimed responsibility for two different Jerusalem terror attacks in the last five years.

Both Samidoun’s international coordinator, Charlotte Kates, and its European coordinator, Mohammed Khatib, are PFLP members and have represented the terrorist group abroad, according to the PFLP’s website. The Palestinian Information Center, a Hamas-linked news agency, also identified Khatib as a PFLP spokesman.

Samidoun events have regularly featured the PFLP’s flag, and the activist group’s campaigns often overlap with the PFLP’s interests.

Samidoun celebrated the PFLP’s 50th anniversary in December 2017 with a rally in New York City that featured a videotaped message from Leila Khaled, a PFLP official who hijacked a plane in 1969. Khaled and her fellow hijacker reportedly believed the Israeli ambassador to the U.S. was on board.

Kates and Samidoun have worked closely with Palestinian activist Khaled Barakat, who heads the International Campaign to Free Ahmad Saadat, TheDCNF found. Barakat, too, is a PFLP member, according to the PFLP.

Saadat is a PFLP leader who was sentenced to 30 years in Israeli prison in December 2008 for his leadership role in the terrorist organization. The judges at Saadat’s sentencing said his actions indicated “that he initiated and participated in military activity with the aim of killing innocent people.”

Samidoun and Barakat’s organization appear to be two separate entities, though Samidoun identified Barakat as one of its activists in 2013, regularly publishes Barakat’s columns and organizes events in coordination with his group.

The two organizations, for example, teamed up in January for a protest in New York City demanding Saadat’s release.

In June 2018, a delegation, including Barakat, Kates and a PFLP official, delivered a letter from Saadat to Venezuelan dictator Nicolas Maduro, Samidoun announced in a Facebook post. 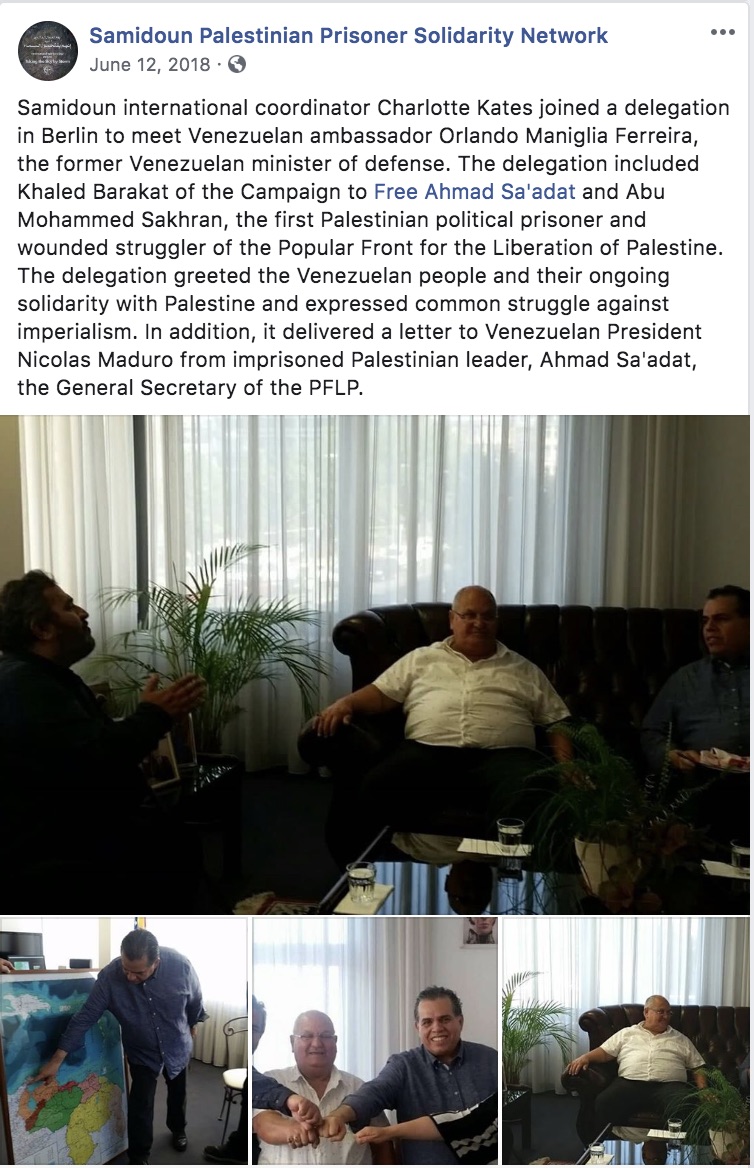 While the PFLP’s Arabic-language website identified Barakat as a PFLP member, the terrorist organization’s English-language website instead describes “Comrade Khaled Barakat” as a “writer” and “coordinator of the international Campaign to Free Ahmad Sa’adat.”

Barakat described Saadat as his “comrade” and said he was in contact with Saadat in an article Samidoun published in January.

Additionally, a Palestinian-born Belgian activist affiliated with Samidoun, Mustapha Awad, was arrested in Israel in July 2018 and convicted of terror-related offenses, including transferring funds to the PFLP. Awad was sentenced to a year in prison, but was freed in March under an early release program.

Awad represented Samidoun at an October 2017 protest in Brussels supporting Lebanese militant Georges Abdallah, Samidoun acknowledged in a contemporaneous Facebook post. French authorities sentenced Abdallah to life in prison for his role in the murder of two Israeli and American officials and for the attempted assassination of an American diplomat.

PFLP said in an Arabic-language article that Barakat, Kates, Awad and Khatib were part of a PFLP delegation that traveled to Brussels in 2016 on behalf of the terrorist organization. 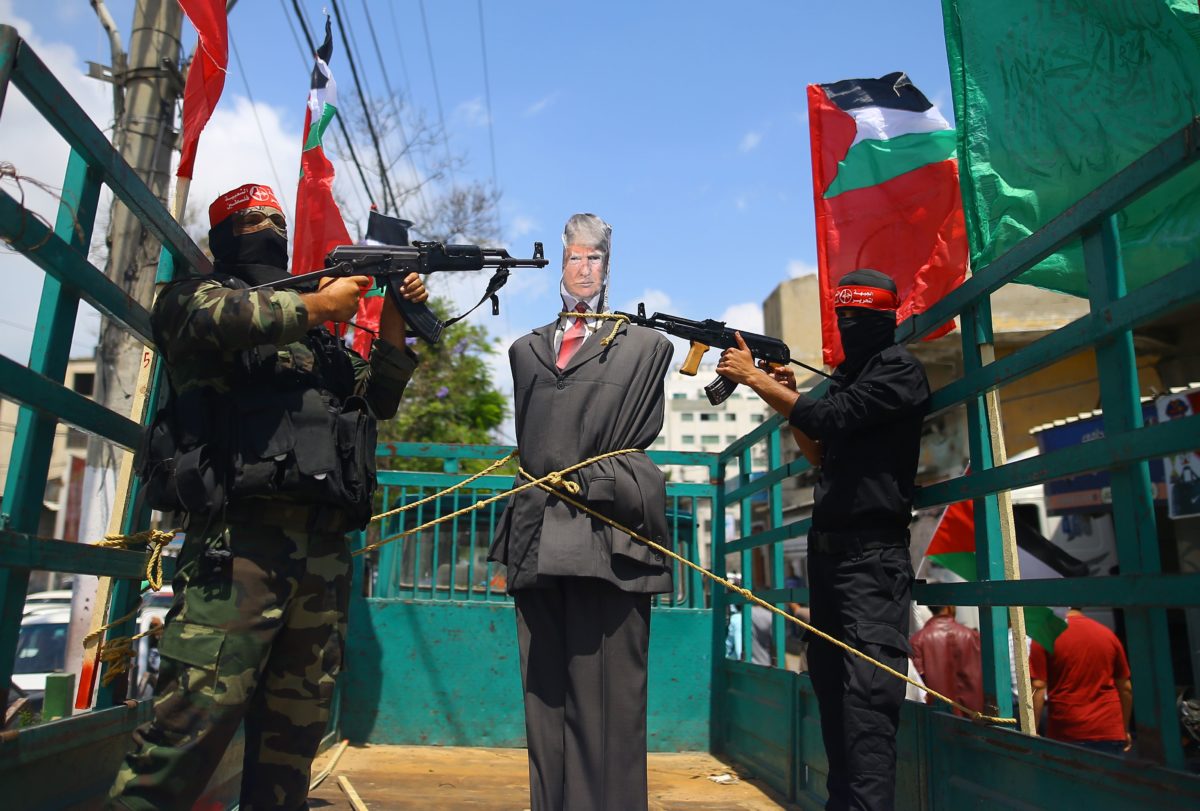 Palestinian militants from the Popular Front for the Liberation of Palestine (PFLP) aim their weapons at an effigy depicting U.S. President Donald Trump during a protest in Gaza City, on May 23, 2017. (MOHAMMED ABED/AFP/Getty Images)

Awad was recruited by the PFLP in 2010, and he later funneled money to Barakat in the years before his arrest in 2018, according to Israeli authorities.

Barakat “arranged for Awad to begin his military training in 2015 in Lebanon with Hezbollah,” the Israeli government charged in a February 2019 report on the BDS movement‘s ties to extremists. The Israeli report identified Awad, Barakat and Kates as PFLP members.

And in April, the payment provider PayPal banned Samidoun from its platform over concerns about the group’s terror ties, according to the Jewish News Syndicate.

Despite its closeness with a designated terrorist organization, Samidoun has made inroads into progressive politics in the U.S.

Progressive activist group People For the American Way partnered with Samidoun for a November 2017 event, The Washington Free Beacon noted in a November 2018 article.

The congresswoman met Catron during an event organized by American Muslims for Palestine (AMP), another BDS-supporting group with ties to extremists. 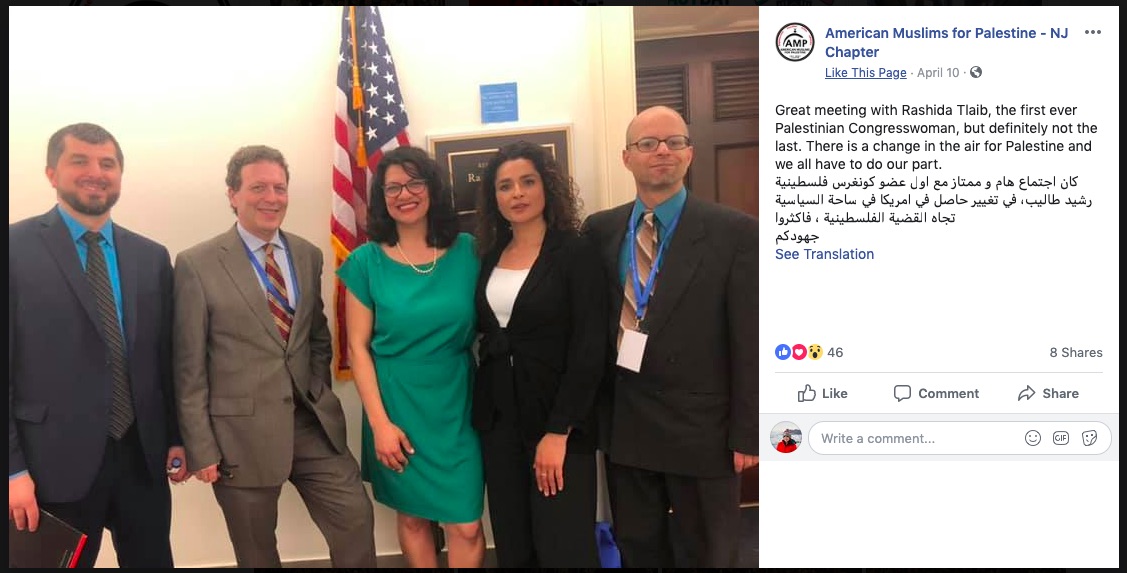 Tlaib, a BDS supporter, has repeatedly faced scrutiny over her ties to anti-Israel radicals. She faced backlash in January after questioning whether Republicans who support anti-BDS legislation “forgot what country they represent.”

Catron is supportive of PFLP terrorists on social media.

His cover photo on both of his personal Twitter and Facebook accounts is a montage of a PFLP fighter donned in the organization’s official logo, as well as rockets and soldiers pointed towards a target over the state of Israel.

The photo also displays an Arabic phrase that translates to: “If you do [more attacks on Gaza] we will do [more as well], Hell is waiting for you,” which is attributed to Mohammed Deif, the supreme military commander of Hamas’s military wing, Izz ad-Din al-Qassam Brigades.

In 2014, Catron participated in a press conference alongside Tawfiq Abu Naim, the head of the Hamas-run security forces in Gaza. The press conference was held to support Palestinian prisoners, according to The Gaza Scoop.

AMP, the BDS organization that facilitated the Catron-Tlaib meeting, has its own links to Palestinian extremists, TheDCNF found.

“AMP has its organizational roots in the Islamic Association of Palestine (IAP), an anti-Semitic group that served as the main propaganda arm for Hamas in the United States until it was dissolved in 2004,” according to the Anti-Defamation League (ADL), a liberal nonprofit policing anti-Semitism.

“Since its creation in 2005, AMP continues to work closely with some former IAP leaders who currently hold positions as AMP board members,” the ADL states.

A former Hamas operative, Salah Sarsour, who was jailed in Israel in the 1990s because of his alleged work for the terrorist group, is also a member of AMP’s national board.

“Israelis have to be bombed, they are a threat to the legitimacy of Palestine, and it is wrong to maintain the state of Israel. It is an illegitimate creation born from colonialism and racism,” Herzallah said, according to the ADL.

The U.S. Campaign “helps facilitate tax-exempt donations to a Palestinian coalition that includes Hamas, Palestinian Islamic Jihad, the Popular Front for the Liberation of Palestine, and other groups the U.S. State Department designates as terror organizations,” Tablet magazine found in a February investigation.

The U.S. Campaign is a “fiscal sponsor” for the Palestinian BDS National Committee, a coalition whose members include the Council of National and Islamic Forces in Palestine, Tablet’s investigation found.

AMP, Samidoun, Tlaib’s office and the U.S. Campaign all declined to comment.