Nearly eight years after her husband’s death left her to raise their newborn son alone, Gold Star wife Brittany Jacobs is trying to ensure that families like hers receive their full survivor benefits from the U.S. government.

Like many widows, Jacobs was rushed through a scourge of paperwork, in part so that she could start receiving the benefits offered to the surviving family members of service members. 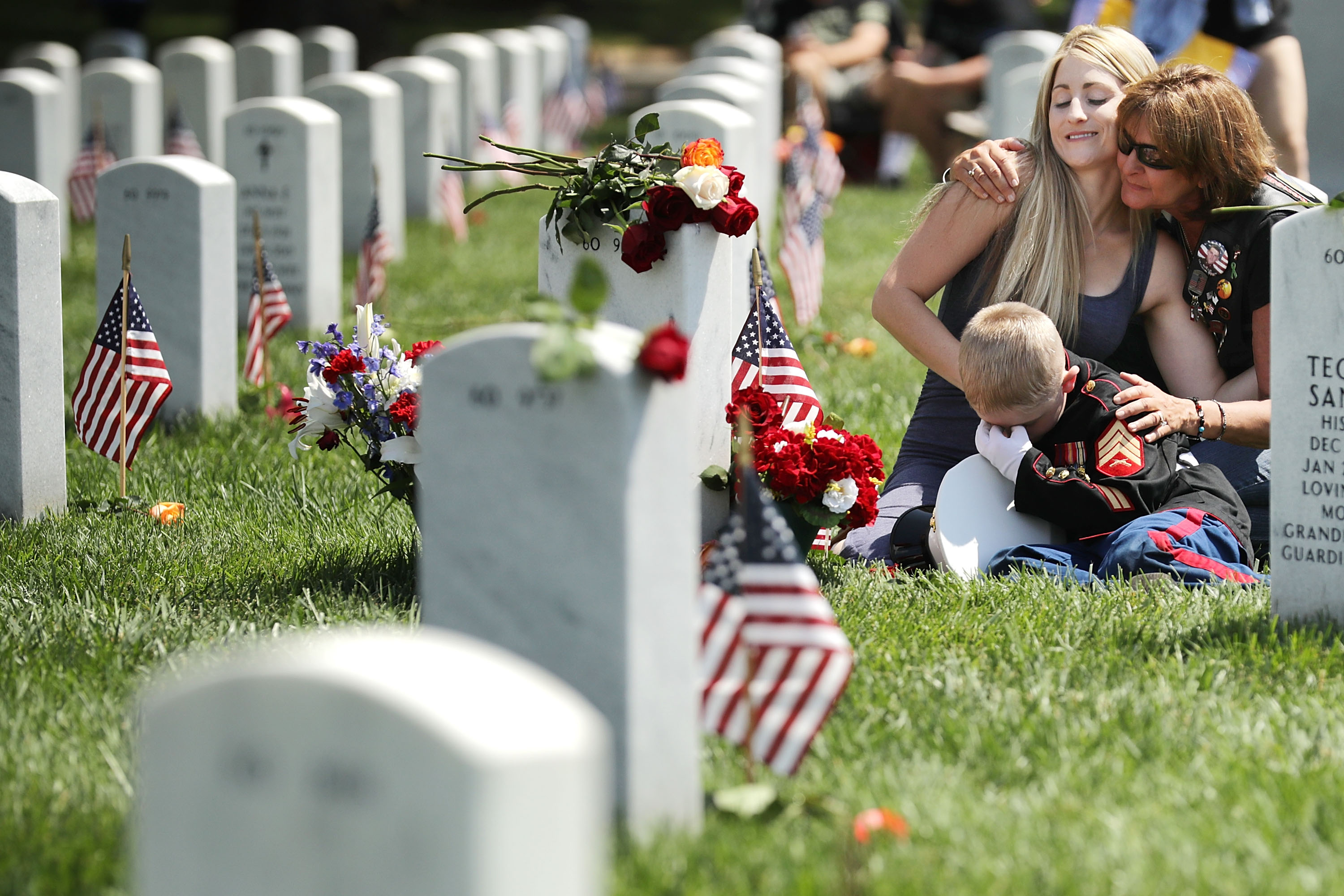 ARLINGTON, VA – MAY 29: Brittany Jacobs (L) of Hertford, North Carolina, and her son, Christian Jacobs, 6, are embraced by a friend while sitting next to the grave of Brittany’s husband, U.S. Marine Corps Sgt. Chris Jacobs, in Section 60 at Arlington National Cemetery on Memorial Day May 29, 2017 in Arlington, Virginia. (Photo by Chip Somodevilla/Getty Images)

At the time, Jacobs was instructed to select the “child only” option so that she could avoid something called the “Widow’s Tax.”

The SBP is a Department of Defense (DOD) insurance plan that pays survivors a monthly income in the event of a service member’s early death, while the DIC is a Veterans Affairs (VA) program that gives a tax-free benefit to survivors. Service members opt into the SBP by paying premiums to enroll in the insurance program.

Survivors, however, are not allowed to “double dip” by receiving benefits across government agencies. For each $1 a survivor receives in DIC, they lose $1 from their SBP.

“SBP is an insurance annuity earned by years of service and/or paid for as income protection for surviving family members. It is not standard practice for insurance programs to deny payment because a beneficiary receives income from another source,” Jacobs wrote in an email to The Daily Caller.

Approximately 65,000 military widows are affected by the SBP/DIC offset.

In order to avoid the Widow’s Tax, some surviving wives opt to sign their SBP benefits away to their children. However, many do not realize that by doing so, they forfeit the benefit once their child turns 18, or 22 if they are a full-time student. 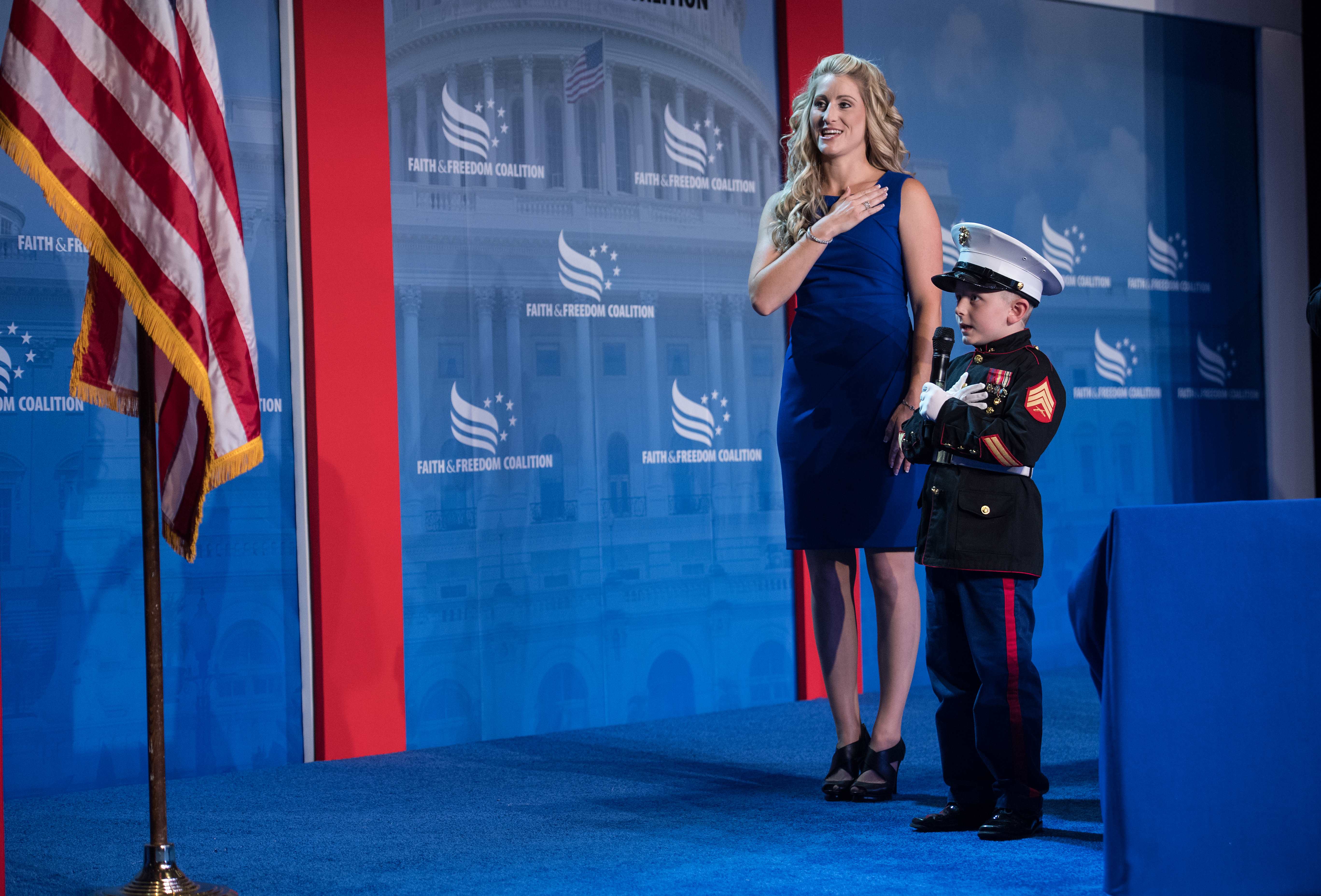 Six-year-old Christian Jacobs says the Pledge of Allegiance with his mother Brittany Jacobs before US President Donald Trump addresses the Faith and Freedom Coalitions Road to Majority Conference in Washington, DC, on June 8, 2017. (NICHOLAS KAMM/AFP/Getty Images)

“Some people sign these papers days after their husband dies,” Jacobs told the Caller. “I had no idea what I was signing.”

Widows who selected the child option were hit with another unexpected whammy this year, when they discovered that a new provision in the tax code takes away even more of the benefits to which they are entitled.

The Trump-backed Tax Cuts and Jobs Act made changes to the “Kiddie Tax,” a tax on a child’s unearned income. The tax would typically apply to trusts or estates, but the new law also includes benefits given to Gold Star children.

Instead of being taxed at the parent’s rate, SBP allocations are now taxed as high as 37%, according to Task & Purpose.

Theresa Jones, whose Navy Lt. husband was killed in a helicopter crash, has seen the tax obligation on her child’s benefit spike from about $1,150 to $5,400.

“My kids are owing the government back money, that the government gave them, because their dad died, and my kids have to pay it back,” Jones told Task & Purpose. “And every year this comes around and it’s just this reminder of this tragedy, and it’s literally like throwing salt in the wound.”

There are currently bills in the House and the Senate that would eliminate the Widow’s Tax, allowing widows to put both benefits in their name so they can avoid the offset and the higher tax rate on unearned child income. Each bill also allows widows who previously chose the “child only” option to reselect.

S. 622, the Military Widow’s Tax Elimination Act of 2019, is sponsored by Democratic Alabama Sen. Doug Jones and is sitting in the Armed Services Committee.

Jacobs, who met President Donald Trump with her son at Arlington National Cemetery on Memorial Day in 2017, believes the president would support such measures.

“If I could just get five minutes with him I know he would help,” Jacobs told the Caller. “I just know he would.”

A spokesperson for the Department of the Treasury assured the Caller that they are examining the issue.

“We are deeply grateful for the sacrifices made by our brave service members and their families and we are evaluating what can be done to solve this issue and provide relief to the families of our fallen heroes,” the spokesperson said.