“BANG! Ouch! BANG! Wow-owwww! BANG! Jeez oh Pete …” This real-life quote from the shooting range highlights my recent willful violation of the first rule of gun writing: never volunteer to review tactical or deer hunting shotguns because 12-gauge slugs in quantity will hurt you — they hurt a lot.

But, as the new guy at GUNS, it was my duty to show, rather than tell, I can cut the proverbial mustard. Armed and on a mission, I figuratively hitched up my foundation garments and went to the shooting range to prove I’m a worthy Alpha Male among the other expert he-men writers here at America’s Greatest Gun Magazine. There I am, Boy Paladin, leading the thundering herd whilst slaying the grammar dragons with the stroke of a pen.

Unfortunately there wasn’t much bravado in evidence when I got home after putting the Remington 870 DM Hardwood shotgun through its paces. My whining about a sore shoulder, aching cheek and possibly dislocated snot-locker had my wife rolling her eyes clean out of her head. They landed on the floor and came to rest among the dust bunnies under the curio cabinet. “Well, Hotshot, what did you learn?” she said with sarcasm, stunning a passing housefly.

What I discovered is the Remington 870 DM combines the proven functional reliability of a classic scattergun platform with the speed-loading abilities of a magazine-fed gun. Is this important to you? Read on and you’ll understand why the term Your Mileage May Vary applies to this particular hotrod of a shotgun.

I know it’s completely “old school” and therefore not cool, but I dearly love shotguns for home defense and room clearing. Back in my former life as a street cop, I was the last guy to give up my 10″ Remington 870 when they started issuing patrol rifles. I’d never argue against the effectiveness of a carbine but I’ve seen what an ounce of .72 caliber lead does to flesh at bad-breath distances and it’s hard to argue you could do more damage with anything short of a crew-served weapon.

Yet, for all the positives of a pump shotgun as a defensive arm, one of the primary kicks against the gun is the supposed “slow” loading of a tube magazine. It’s hard to argue the act of stuffing one round at a time into the action is anything but plodding compared to slapping a box magazine into the bottom of the gun. This fact is why the Remington 870 DM exists. 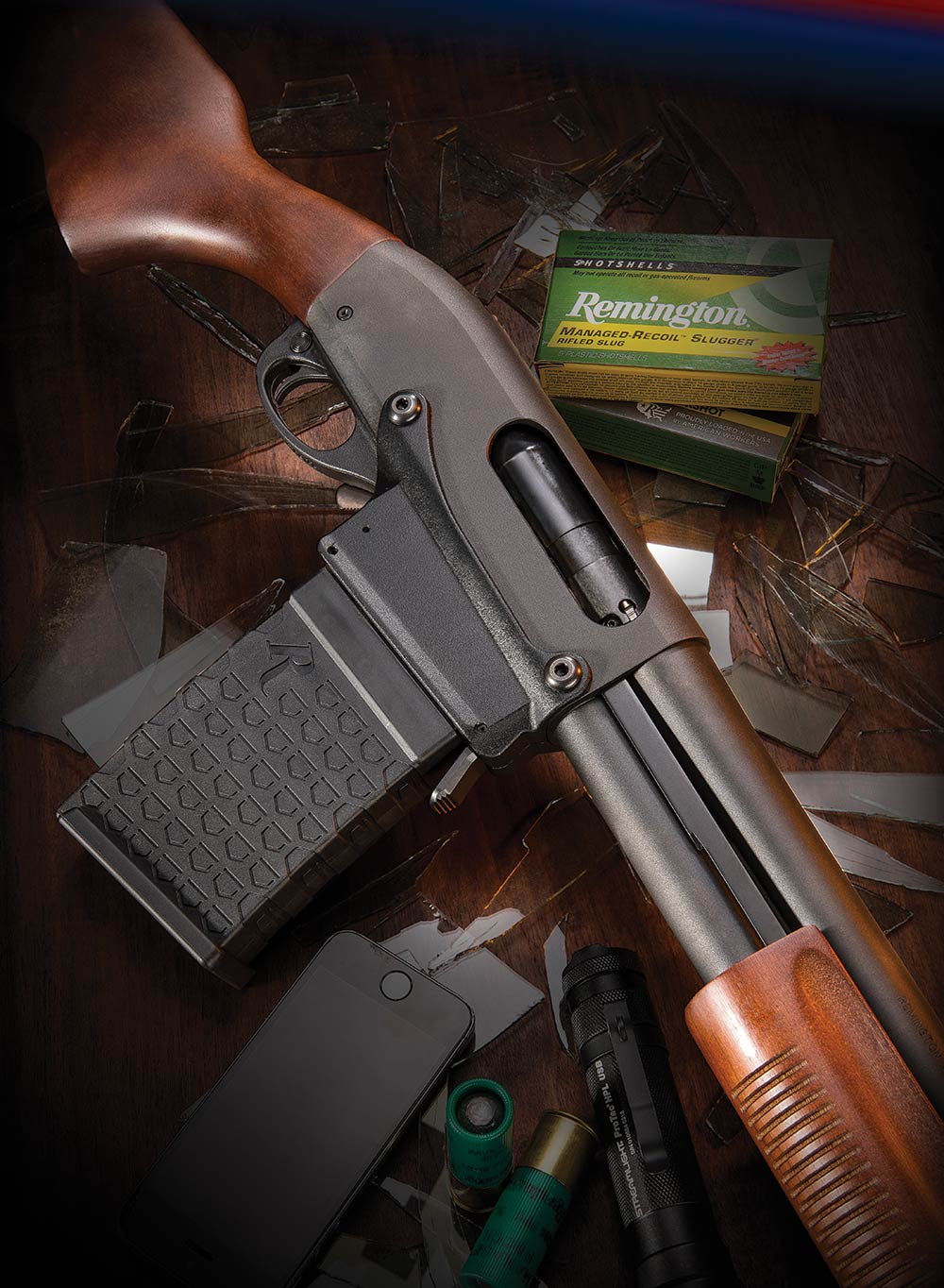 At this point in the playbook we’re supposed to sing the praises of a hot new gun, but in this case we’re talking about a platform surviving essentially unchanged for 60-plus years. The 870 traces its lineage to the turn of the 20th century when its grandpappy, the Browning-designed Model 17, was first sold in 1915. The 20-gauge-only bottom-ejecting M17 worked well and set the stage for the side-ejecting Model 31. The multi-gauge M31 was successful but lagged behind the Winchester Model 12 in sales and was also expensive to produce. The engineering team at Remington then took the M31 design elements and set out to produce a modern, reliable but less costly shotgun. The 870 was thus born in 1950.

The rugged, simple action of the 870 was popular with hunters but cops eventually made it “the” police shotgun in our country. While the Mossberg 500 was also widely used the 870 was truly — okay, I’ll say it, ubiquitous — with cops ranging from G-men to the local PD until the patrol rifle “craze” took hold. During the 870’s heyday, police officers of my own youthful age (feel free to insert your own eye roll here) were drilled on the manual of arms for the gun until our fingers were numb and we could perform a “select slug” drill in the dark, in the rain and with sadistic instructors screaming at you until your eardrums bled.

It’s possible to mess up with a pump shotgun, particularly if you get excited and “short-stroke” it, but with practice it’s nearly as bullet-proof as an anvil. More literally, it’s as reliable as any multi-shot system in existence. Even today I’m still most comfortable with an 870 in my hands when it comes to finger-trembling, gut-clenching circumstances. Fortunately, it doesn’t happen very often anymore but the emergency gun resting quietly beneath my side of the bed is still a fully-kitted 870.

Such familiarity is why very little education was necessary with 870 DM. The six-round magazines did inspire a little bit of fumbling at first but handling the big plastic ammo carriers becomes far more natural after a few loading cycles. The only malfunctions experienced were shooter-induced when I had the dreaded “Dammit!” of a magazine dropping free after firing one or two rounds. Though I believed my push-pull on the magazine had firmly locked it into the well, the friction generated by a large surface area impeded seating a little bit and gave a false sense of security. Recoil quickly pointed out the error of my ways.

At least nobody was watching so I didn’t have to “push on the ground” to “ensure learning had occurred.” This highlights our only major concern about this gun. The magazine will fight you a little bit so make sure — then make sure again — the magazine is truly seated. I also have concerns the sheet-steel lips on the top of the magazine might suffer a reliability-harming bend if dropped on concrete. I didn’t want to test this particular theory on a gun I don’t own but my friends at Gunsite Academy, having much more experience with the 870 DM, said they haven’t seen this particular problem.

The magazine well is formed by an adapter strapped to the bottom of a standard 870 using the forward trigger plate pin and a new pin at the rear of where the existing tube magazine joins the receiver. This adapter includes a pair of rails covering the tube inlet hole, helping guide the shells toward the chamber. The magazine tube itself contains nothing except air and only serves as the running guide for the fore end. One personal, highly-subjective preference is the magazine release is mounted forward of the magazine well instead of the rear, where my brain thinks it belongs. On the other hand I’m sure just as many folks wouldn’t like it there, either. 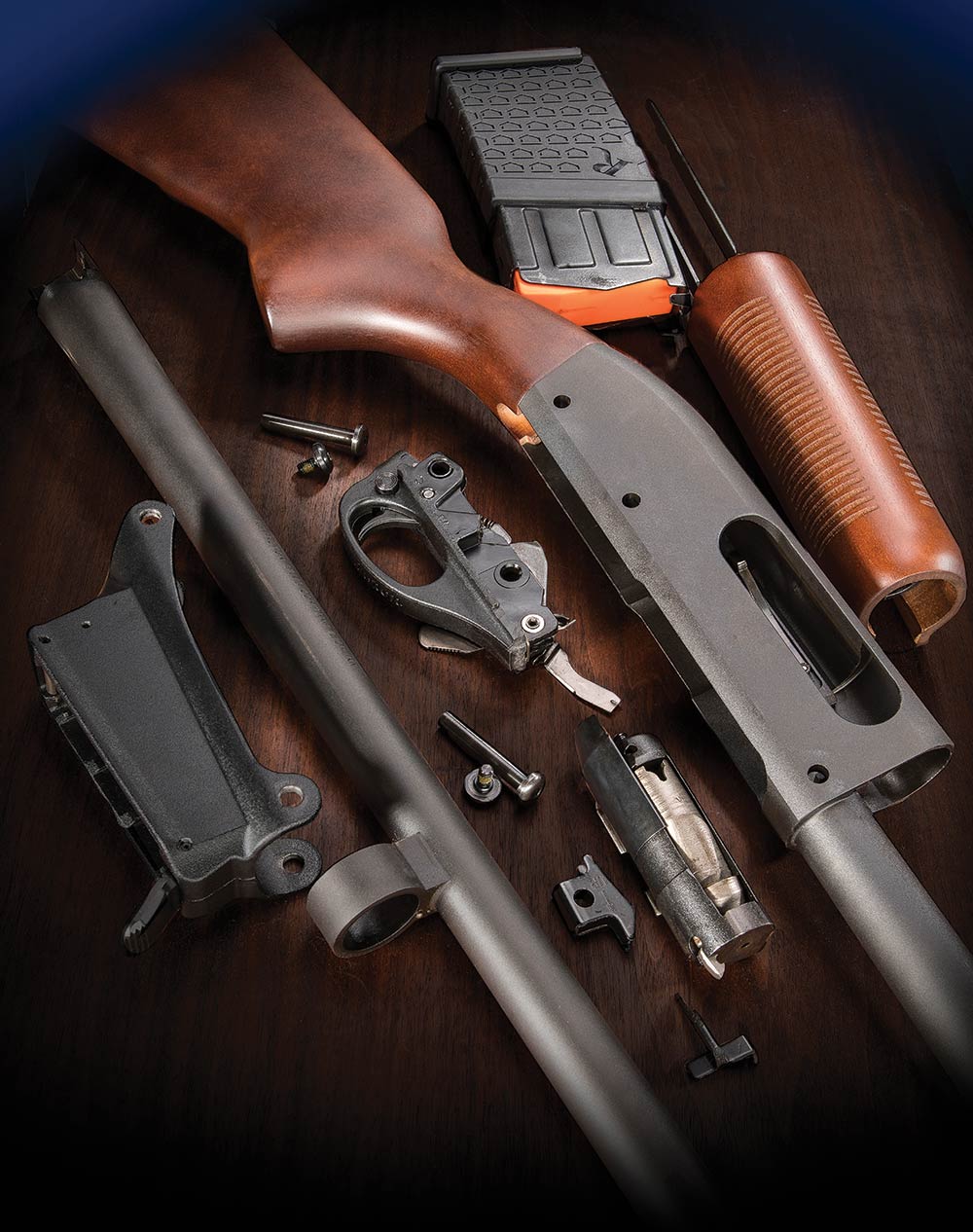 One legitimate concern is the “select-slug” drill is challenging and nearly impractical on the 870 DM. In case you aren’t familiar, this technique is for those moments when your buckshot-stuffed scattergun now needs a slug to reach out and touch the target. With a regular 870 you simply lock the slide to the rear, roll a slug into the open loading port and ram it home with the fore end. In the 870 DM, you can manage the same drill but you must invert the gun first. Under stress, the move is clumsy and keeps the gun out of action for a longer period of time. The manipulation can be done with practice but realize beforehand a magazine change is far quicker.

The other factors of the gun — feeding reliability, workmanship, materials, ease of use, patterning — were pretty much standard for a traditional 870. Aside from the different distribution of weight and the slight awkwardness of the protruding magazine, the whole range experience was comfortable and, frankly, dull. There were no surprises, not much adaptation and little fumbling — but those are all positive things when you’re talking about a firearm whose primary purpose is to keep your own tender epidermis wholly intact.

Ultimately, the scattergun works just like it always does, aside from the addition of a magazine. But — and it’s a big but — we must ask: does adding a magazine on a proven top-shelf pump shotgun solve a latent problem?

If you have designated the pump as your street-sweeper of choice for lethal social entanglements and you’re worried about the speed of reloading during the heat of battle, the 870 DM will solve your problem. On the other hand, to many of us who have carried a scattergun into sketchy civilian circumstances, the whole ammo-capacity/reload question seems more like something for internet commandos to endlessly debate from their mom’s basement. But, as I said in the beginning, Your mileage may vary and such debates are what make messing around with guns so fascinating in the first place! Truth be told, if this was your “first” defensive shotgun and you had no experience with the old platform, all of what I said is pretty much moot. You’ll run it fine, without crashing into long-engrained muscle memory glitches.

The Remington 870 DM is built on a proven, reliable chassis and it’s now faster to reload thanks to the box-magazine modification. If this particular facet of operation is important to your own unique situation, I highly recommend checking out this old-but-new pump!

I just don’t recommend firing several boxes of slugs from it in one sitting!

Click here to get GUNS Magazine delivered to your door – Subscriptions On Sale Now!