Democratic New Jersey Rep. Josh Gottheimer took issue with comments Democratic Michigan Rep. Rashida Tlaib made on Wednesday about a private meeting they had in February.

Gottheimer arrived at the meeting, which took place Feb. 6, with Democratic Virginia Rep. Elaine Luria, which he said was “at the behest of Democratic leadership,” according to The Intercept.

Gottheimer spokesperson James Adams wrote in an email to them that they wanted to have “an open, honest discussion about anti-Semitic comments on dual loyalty and other anti-Semitic tropes that the Congressman and many other members of Congress found deeply disturbing. As requested by leadership, the Congressman brought copies of statements that he found disturbingly anti-Semitic. The Congressman shared them with Congresswoman Tlaib and had what he believed, at the time, was a mutually productive conversation.”

She told The Intercept, “He was using a very stern tone, like a father to a child. At that moment, I realized he’s a bully. He had a goal of breaking me down. I left feeling exactly that way.”

Luria backed Gottheimer’s recollection of events, explaining to Jewish Insider that “the meeting was cordial,” and that she doesn’t “have any recollection of [Rep. Gottheimer] bullying or being rude or anything like that.” 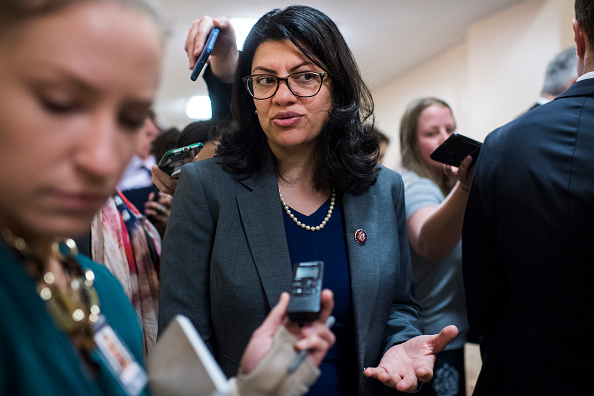 UNITED STATES – APRIL 30: Rep. Rashida Tlaib, D-Mich., talks with reporters after a meeting of the House Democratic Caucus in the Capitol on Tuesday, April 30, 2019. (Photo By Tom Williams/CQ Roll Call)

He told them that in the meeting, “We shared some of what we believed were anti-Semitic statements made by multiple members of Congress. We had what we believed, at the time, was a mutually productive conversation. I’m disappointed by the misleading way this attempt to bridge differences was characterized.”

Tlaib has made news during her first couple months in Congress.

One of her key fundraisers, Maher Abdel-qader, has repeatedly promoted anti-Semitic conspiracy theories. She also had a pro-Palestinian extremist at her swearing-in ceremony. (RELATED: The Pro-Palestinian Activist Who Attended Rep. Tlaib’s Swearing-In Ceremony Breaks Silence)

She has also firmly stated her support for the Boycott, Divest, and Sanction movement (BDS), which seeks to boycott Israel over their treatment of the Palestinian people. Many consider the movement to be anti-Semitic because it only calls for a boycott of the Jewish state.

Jewish Insider reported earlier this week that the congresswoman will be planning a congressional delegation to visit the West Bank this summer.