A cleverly designed 2012 ban on private gun ownership in Venezuela is making it easier for Nicolas Maduro to keep a popular uprising in check, but perhaps more importantly, the ban is making his clampdown more palatable to a watching world.

Some Venezuelans, including experts and expats, expressed frustration with the ban last week, after a call from U.S.-backed opposition leader Juan Guaido for an armed uprising largely fell flat. It’s all but impossible for citizens to get guns, they lamented, which means they have to rely on the military to oust Maduro from power rather than a popular uprising. (RELATED: Venezuela Banned Gun Private Gun Ownership Less Than Ten Years Ago)

While it’s true the ban makes armed resistance more difficult, dreams of a popular uprising may be overstated, given the attitude of Venezuelans generally toward guns and the founding culture there of dependence on government. A lesser discussed effect of the ban, though, is the way it empowered criminal gangs one step removed from the government to do its dirty work.

The result seems to be that not only are these gangs emboldened in a fight against an unarmed populace, but also the need for a dramatic show of force on the part of the government to keep the populace in check is avoided. Let’s take a closer look.

Chavez billed the 2012 law as a crime-fighting measure. The stated goal was to disarm the civilian populace in order to cut down on crime rates that had been on the rise since he assumed power in 1999. The country was then, and continues to be, considered one of the most dangerous in the world. Its capital city of Caracas registered 122 homicides per 100,000 people in 2012, with a national rate more than twice that of neighboring Columbia, which was then embroiled in a civil conflict.

Seven years later, the country is still considered one of the most dangerous in the world — the Venezuelan Observatory of Violence attributes a slight dip in the crime rate in recent years to criminals choosing to leave the country, because the situation is so bad.

The reality is Chavez was likely looking for a gold star for a move to combat crime in passing the law, that in effect was actually about solidifying his control and preventing only the kind of violence that might hurt his regime.

“What he doesn’t want at that time is having people with weapons around that might threaten his regime,” Carlos Ponce, the director of Latin American Programs at the Victims of Communism Memorial Foundation, told The Daily Caller. “You’re talking about a criminal kind of regime, and Chavez was the one who put it together, a mafia kind of state. For him the weapons need to be in government hands all the time, or with a group directly controlled by the government.” 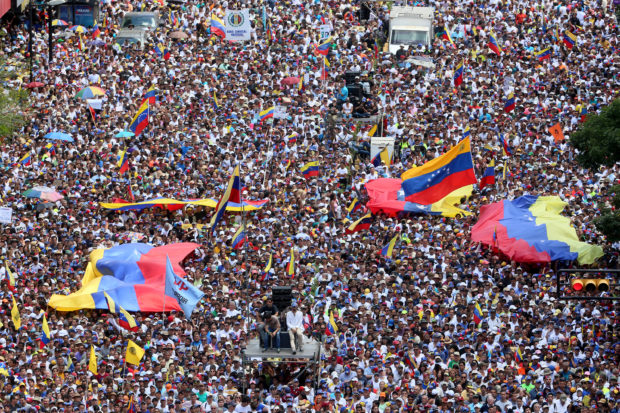 Thousands of protesters gather at Avenida Francisco De Miranda during a demonstration organized by Juan Guaidó President of the Venezuelan National Assembly on February 12, 2019 in Caracas, Venezuela. (Edilzon Gamez/Getty Images)

Chavez accomplished this by confiscating guns from private citizens, while simultaneously codifying into law the ability of criminal gangs he endorsed to buy weapons from the government. Only the military, police and government-backed militia groups known as colectivos have legal access to guns. Everyone else became subject to 20 years imprisonment if they violated the ban.

There was some resistance to the law, Ponce said, but no strong popular feeling about the matter like you would have in the U.S. “There was not such high passion about the issue,” Ponce added, noting that Venezuela has never had a constitutional right to gun ownership and that the people there don’t tend to be gun enthusiasts.

“There is not a culture to carry guns there, that’s not a popular thing,” Ponce said. “People have no passion for hunting and fishing, and normally the ones that carry guns are criminals, or members of the elite that protect themselves.”

Chavez launched a gun buyback campaign in junction with the law, but the vast majority of recorded gun seizures in 2013, when the law took effect, were by force. The government confiscated more than 12,000 guns, compared to less than 40 voluntary surrenders. They made a few public demonstrations of destroying them, while simultaneously arming the colectivos.

Those government-backed militias are now doing Maduro’s dirty work. Dozens of Venezuelan protesters have reportedly been shot dead in the streets, but there is some confusion in U.S. media about who is to blame, because of the somewhat opaque nature of the violence. A recent fact check, for example, rated the claim that Venezuelans are being gunned down by the government as “decontextualized” on the grounds that it’s unclear who is doing the shooting. 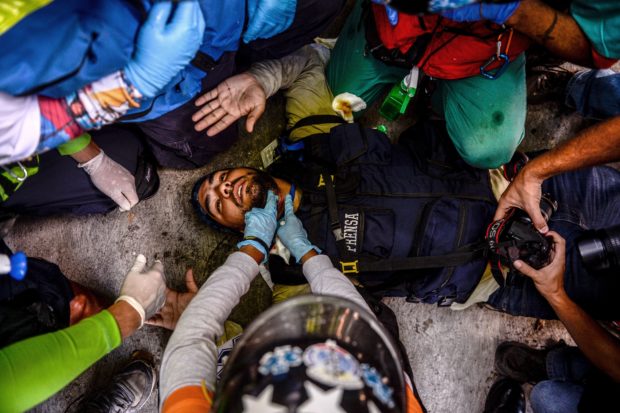 A wounded journalist is helped by volunteer medics during clashes between opposition demonstrators and riot police ensuing an anti-government protest in Caracas, on July 26, 2017.
(FEDERICO PARRA/AFP/Getty Images)

Human Rights groups, however, believe the violence is being carried out by pro-Maduro forces. The U.N. Office of Human Rights recently reported 20 deaths in one week that were attributed to government forces by credible local news outlets. (RELATED: Pro-Maduro Groups Killed At Least 20 People In Two Days Amid Political Turmoil)

The colectivos are not only endorsed and armed by the government, Ponce told The Daily Caller, they include members of the government as well — they are not simply locals who happen to support Maduro’s regime.

The power granted to these colectivos and the resulting confusion over who is responsible for the low level violence against unarmed protesters is a foreseeable benefit to Maduro, and likely part of Chavez’s plan in implementing the ban in the first place, Paul Larkin, a senior legal research fellow at the Heritage Foundation, told The Daily Caller.

“Chavez and Maduro are both in the same position,” he said. “They’re dictators. They’re worried first of all about an uprising by the people, but they are also worried about the appearance of making it look like they are a 21st century version of the Soviets rolling into Hungary and Czechoslovakia by sending in their tanks.”

“That didn’t exactly endear the Soviet Union to the rest of the world,” he continued. “So rather than send tanks, aircraft and artillery against people, they’re basically subcontracting their work to these other groups, because that allows them to avoid making it look like it’s the government thats suppressing people.”

1
FBI Interview Notes With Page And Papadopoulos Are Released
US
2
Antifa Group To March Alongside Pro-Gun Protesters In Virginia
US
3
Foster Friess Could Shake Up The Wyoming Senate Race
Politics
4
Reporter Who Didn't Speak English Approached LSU's Football Coach. What He Did Next Was Incredible
Editorial
5
'Unusual' And 'Jarring': CNN Panel Questions Pelosi's Souvenir Impeachment Pens, Smiling For Pictures
Media