The school said it conducted an investigation, which included informing 2,800 parents of the allegations “in the hopes” that somebody would “confidentially” come forward with information.

An individual claiming to be a STEM parent made several allegations regarding the school’s culture when she called Douglas County School District’s (DCSD) Board of Education director Wendy Vogel in December 2018. The person chose to remain anonymous because she feared her children would be expelled, according to an email obtained by The Daily Caller News Foundation Wednesday.

“While STEM took the allegations seriously, our investigation revealed no evidence to support any of the allegations raised in the anonymous complaint,” according to an email to TheDCNF Thursday.

It is unclear exactly what information was conveyed to parents, how the school attempted to elicit responses and whether respondents were asked to explicitly report fears of violence and suicidal tendencies. A spokesman for STEM, Gil Rudawsky, refused to provide such details and would not comment beyond the crafted statement given to TheDCNF.

The anonymous caller also alleged STEM had an “extremely high drug culture” with students going to rehab, and rampant instances of bullying. Some students also reportedly learned to build a bomb in the school.

One of the suspected shooters, Devon Erickson, was reportedly bullied and suffered from depression, according to The Wall Street Journal.

Other claims included money being sent to Mexico and China, students having to clean off feces from school walls with their bare hands and a teacher hitting a student. STEM called several of the allegations “outrageous” and “false” in a February email given to TheDCNF by DCSD Public Information Officer Paula Hans Wednesday. 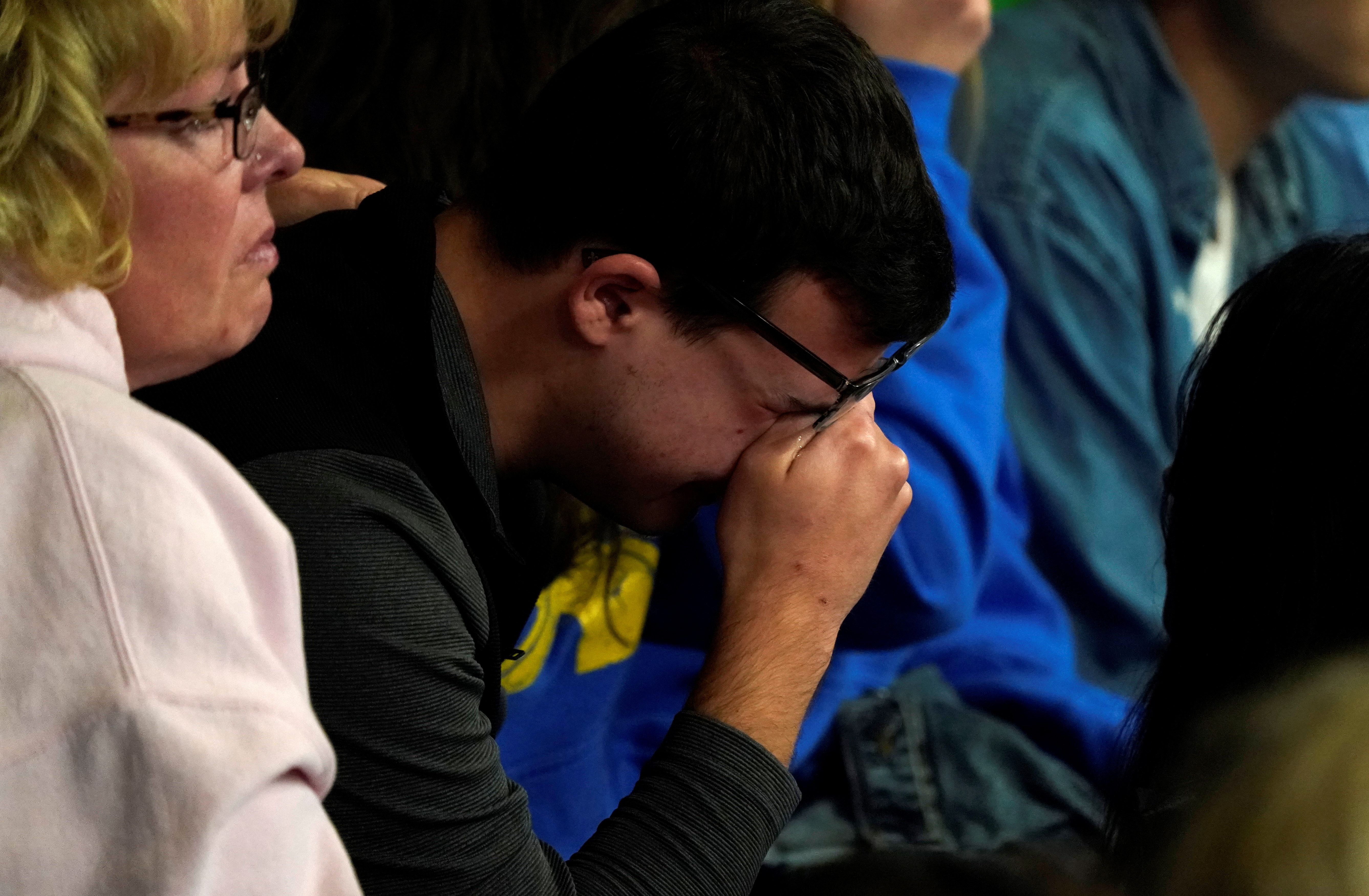 A man cries at a vigil for the victims of the shooting at the Science, Technology, Engineering and Math (STEM) School in Highlands Ranch, Colorado, U.S., May 8, 2019. REUTERS/Rick Wilking

Rudawsky would not provide details of the lawsuit to TheDCNF.

“Jane Doe engaged in extreme and outrageous conduct by, among other things, waging a campaign to publish wildly false and outrageously defamatory statements with the obvious purpose of destroying Dr. Penelope Eucker’s reputation,” the pending lawsuit said, according to 9 News.

The lawsuit demands a subpoena for phone records to discover the caller’s identity, NBC News reported.

Vogel reported some of the phone call’s content to the “Department of Human Services and to the Sheriff’s Department.”

DCSD parent Aaron Johnson told TheDCNF over email Thursday that the school board has kept a close eye on STEM since the charter is up for renewal. (RELATED: Colorado Students Grow Angry At Vigil’s Politicization, Some Walk Out)

“The school has been under the microscope from the school board recently as its charter was up for renewal,” Johnson said.

Audrey, a former cheerleader at STEM, told board members she was leaving the school because she did not feel safe, CPR reported.

“It’s been a standing joke for a few years that if any school is going to have a bombing or shooting it’s going to be STEM because those students know how to do that stuff,” Audrey told board members May 15, 2018, according to CPR.

Lakrisha Glenn, Audrey’s mother, said the school allegedly did not do anything when her daughter reported harassment incidents, CPR reported.

STEM’s contract term ends June 30, according to a DCSD document. 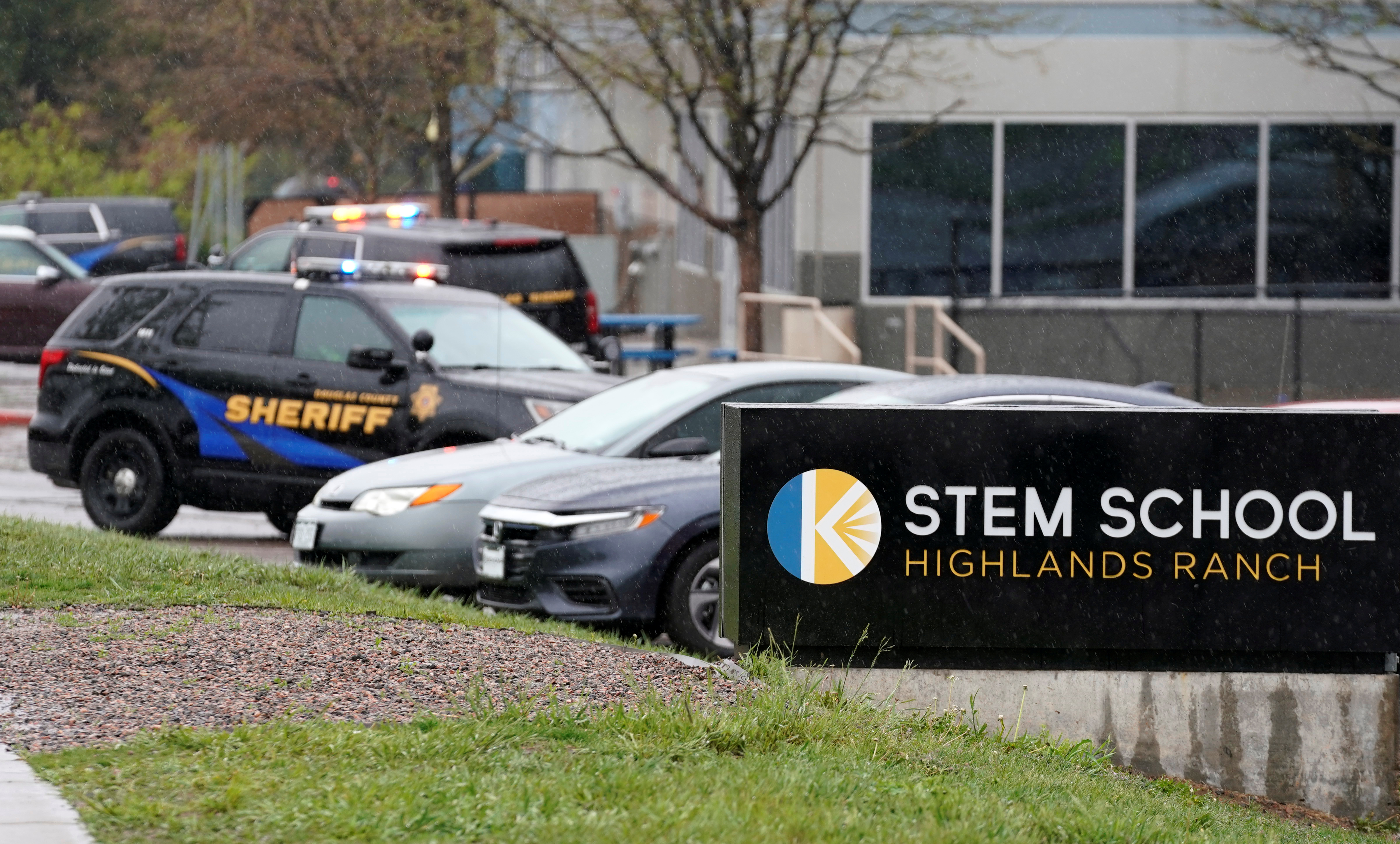 Police vehicles are stationed outside the school following the shooting at the Science, Technology, Engineering and Math (STEM) School in Highlands Ranch, Colorado, U.S., May 8, 2019. REUTERS/Rick Wilking

The STEM School was founded in 2011 and originally taught grades 6-9 before expanding to include K-12 students. Eucker is the current executive director of the school.

The charter struggled financially and academically when it first opened, but now ranks 9th in the state.

STEM is about eight miles away from Columbine High School and 15 miles outside Denver.

DCSD has not said whether it is common for STEM to receive shooting threats, given the school’s proximity to Columbine.