Dennis Rodman hit back at claims that he and his pals were involved in a heist at a yoga store this week following release of surveillance video allegedly showing what went down.

“We walked in and the next thing you know, the employee, I guess she was a female, we walked in and all you saw me do is one thing, this (stand still) ,” the 57-year-old retired basketball player told TMZ in a video shared Friday. “I just stood there. ” (RELATED: Dennis Rodman Arrives In Singapore Ahead Of Trump-Kim Summit [PHOTOS])

Rodman continued explaining that the store owner allegedly asked him and his crew to move the crystal item. “The one thing I try to help. As a good person..I am.”

“I said, ‘Okay guys, let’s go over here and do one thing…and they called it a ‘heist,'” the NBA Hall of Famer shared. “They called it a heist…because guess what? That fucking company… they’re broke.”

When the outlet asked if he thought the whole thing had been just an attempt to “shake you down,” Rodman said, “You’re goddamn right.” 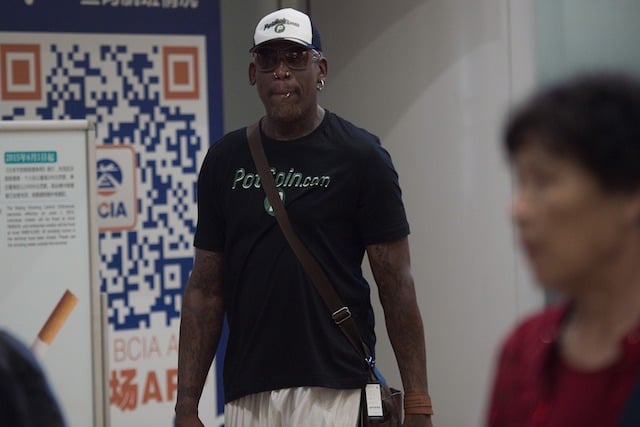 Rodman and company are accused of making off with more than $500 worth of stolen clothing and breaking and then allegedly taking a $2,500 crystal art item. Surveillance video of the whole thing can be seen here. (RELATED: Dennis Rodman’s New Christmas Sweater Involves Trump And Kim Jong Un)

“They gave us clothing. I didn’t need to steal shit,” the former basketball player argued. “They filed a police report and they said ‘Hey, Dennis, guess what? We aren’t going to charge you anything,’ because I didn’t do anything.”

The NBA star is currently on probation from a 2018 DUI arrest and did not seem worried that this alleged incident will affect it.

Newport Police Department confirmed to the outlet that they were was an investigation into the alleged incident but said nothing further.