Cardinal Blase Cupich distanced the archdiocese from the church’s decision to host Farrakhan, saying the church did not consult with the archdiocese. (RELATED: Seven Louis Farrakhan Quotes On Jews, Gays, And White People)

“There is no place in American life for discriminatory rhetoric of any kind,” the archdiocese said in a statement, according to AP. “At a time when hate crimes are on the rise, when religious believers are murdered in their places of worship, we cannot countenance any speech that dehumanizes persons on the basis of ethnicity, religious belief, economic status or country of origin.”

Fritzie Fritzshall, a Holocaust survivor and president of the museum, accused Pfleger of “giving hatred a platform” and warned that community and religious leaders giving people like Farrakhan a platform “increases the threat against all of humanity.”

Farrakhan fired back, pointing out that Cardinal Francis George, Cupich’s predecessor, visited with Farrakhan and shared dinner with him and that Chicago Cardinal Joseph Bernardin also met with him.

“For those angry about me about coming to St. Sabina, how many would be angry with me meeting with Cardinal George and with the previous cardinal? That kind of hatred is insanity,” Farrakhan said. 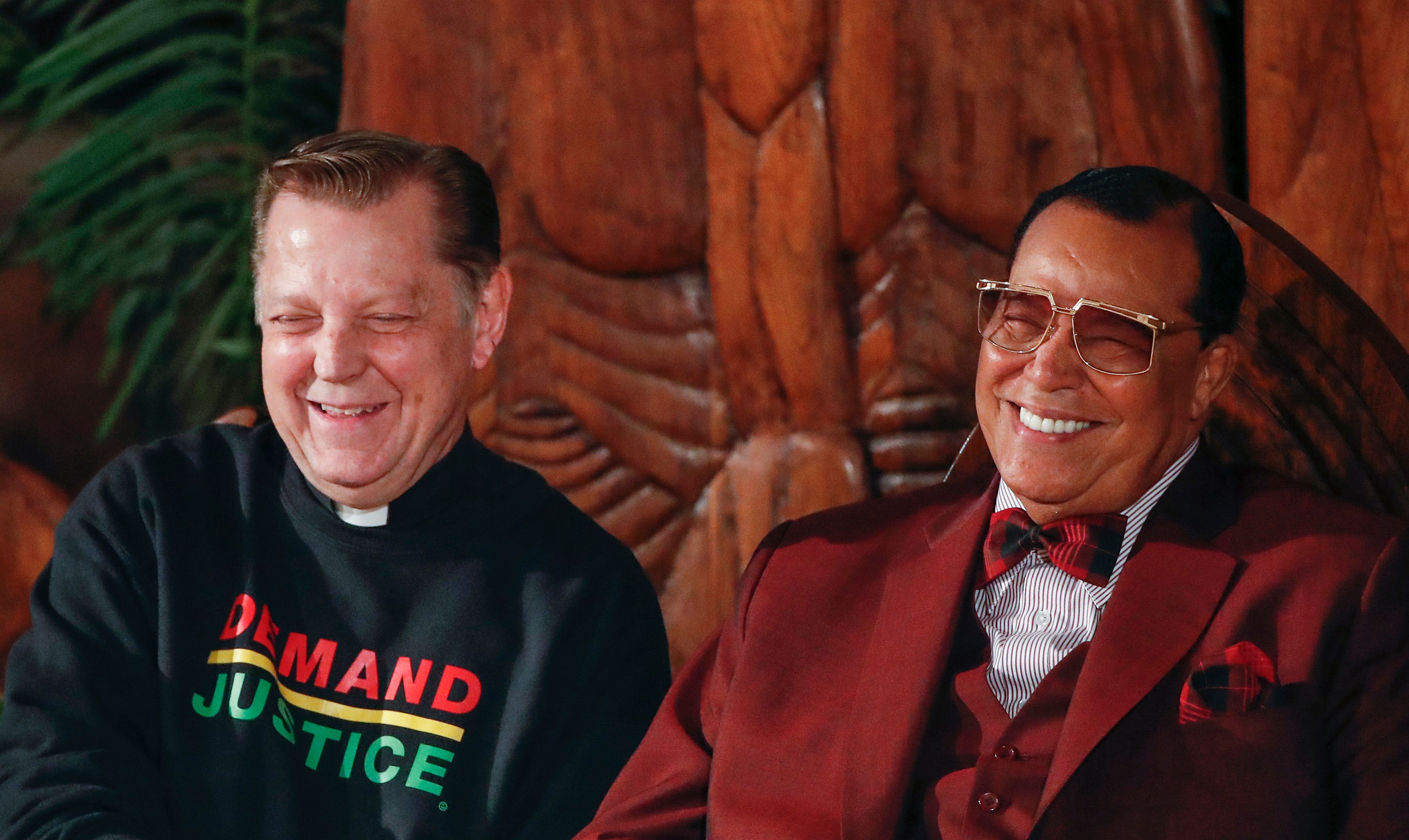 Father Michael Pfleger (L) shares a laugh with Nation of Islam leader Louis Farrakhan (R) during an event regarding his ousting from Facebook, at St. Sabina Catholic Church in Chicago, Illionis on May 9, 2019. (KAMIL KRZACZYNSKI/AFP/Getty Images)

The black nationalist leader also claimed in his speech at the church that he did not hate Jews and that he was neither homophobic nor misogynistic. He did not back down from but attempted to justify his past statements against gay people, white people and Jewish people. “I stand on God’s word,” he said.

Farrakhan has repeatedly called the Jewish faith the “synagogue of Satan” and referred to Jews as “the Satanic Jews that control everything and mostly everybody.” He blamed Jewish people for the Holocaust in 1998. “The Jews have been so bad at politics they lost half their population in the Holocaust,” he said.

The black nationalist leader also welcomed comparisons between himself and former German dictator Adolf Hitler, blamed Jewish people for 9/11, and has repeatedly referred to white people as “white devils”  who “deserve to die.”

Farrakhan also welcomed Facebook’s assessment of him as a “dangerous individual,” saying that it could not stem the spread of his beliefs as his speeches and writings can still be found online.

“Social media you met me tonight. I plead with the rulers, let the truth be taught,” he said.