In a recent spate of hate crime attacks on Hasidic Jews in Crown Heights, Brooklyn, virtually all the perpetrators have been African-American, according to local activists, elected officials, and victims.

Yet at a recent news briefing reporting an 82 percent increase in anti-Semitic incidents in the city, when New York City Mayor Bill de Blasio was asked about the attacks, he connected the attacks to national trends, blaming “white supremacy” and “nativism.”

“It’s really clear that forces of white supremacy have been unleashed,” de Blasio said in a press conference earlier this month. “A lot of folks used to be told it was unacceptable to be anti-Semitic, it was unacceptable to be racist and now they’re getting more permission. We’ve got make it very clear it’s unacceptable in our society. And the best way we do that here is by finding the perpetrators and prosecuting them and ensuring that they feel the consequences of their acts.”

For example, in a prominent case late last year, a black teenager was arrested after being caught on tape furiously beating a Hasidic man with a wooden stick. (RELATED: Is There A Rise In Anti-Semitism In The House?)

Then, in late January, three men were caught on video shoving a Hasidic man violently to the ground, punching him and leaving cuts and bruises. Three African-American men — Nazar Walters, Teshon Bannister, and Joshua Peters — were arrested for the attack and face hate-crime charges. The three are also suspects in another attack the same night. 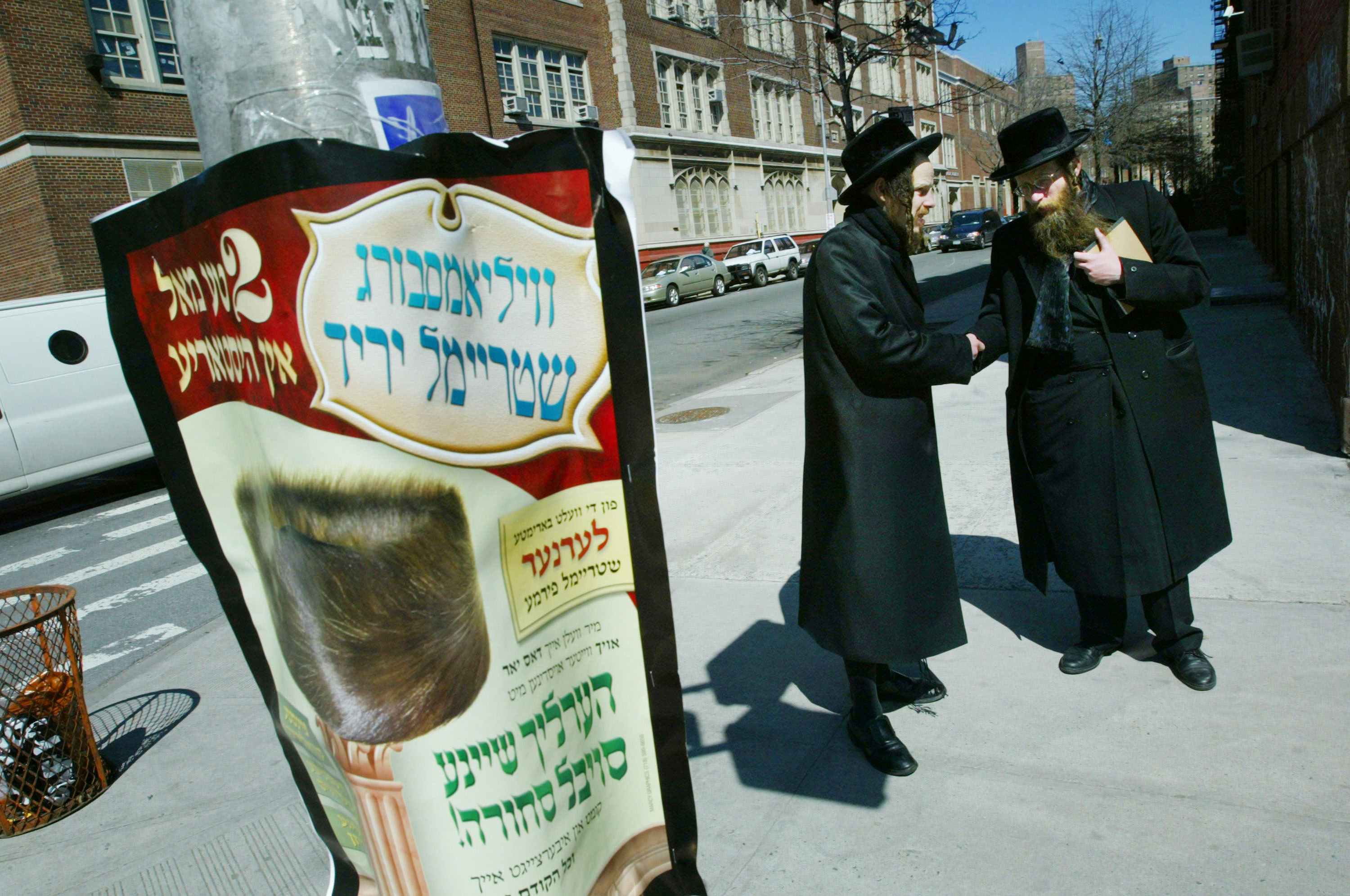 Jewish men confer on a street corner in a predominently Jewish section of the Williamsburg neighborhood of Brooklyn March 23, 2004 in New York. Police officials in New York have tightened security at Jewish facilities and neighborhoods around the city in the aftermath of Israel’s assassination of Palestinian leader Sheik Ahmed Yassin. (Photo by Chris Hondros/Getty Images)

And last month, a Hasidic man who said hello to an African-American man smoking a cigar says the man cursed, punched, and choked him, saying he hates Jews and blames them for his economic problems. The attack was caught on security video.

Crown Heights residents confirm those and many similar videos are representative of the spate of violence.

For example, District Leader Geoffrey Davis, an elected official in New York’s 43rd assembly district, said the attacks are due to black racism against Jews. Davis, who is African-American, called the violence “a misplaced anger by black people who have a tendency of lashing out at Jewish people under the assumption that they are creating havoc in our community — which they are not.”

Crown Heights has been the site of ongoing tensions since a three-day race riot in 1991 in which black youth attacked Jews on the street, killing one rabbinical student, although Davis said he does not see a direct connection between those riots and today’s violence.

Nonetheless, one Hasidic hate-crime victim said all three of his attackers were African-American. Mendy, a Crown Heights resident who asked that his last name not be used, described walking down the street late at night when a black man punched him in the face “quite hard” and ran off with two other men.

He said in his opinion “the vast majority” of the recent attackers have been African-American: “it’s completely one-sided. People in the Jewish community aren’t walking down the street attacking others. We’re not interested in fighting with our neighbors.” 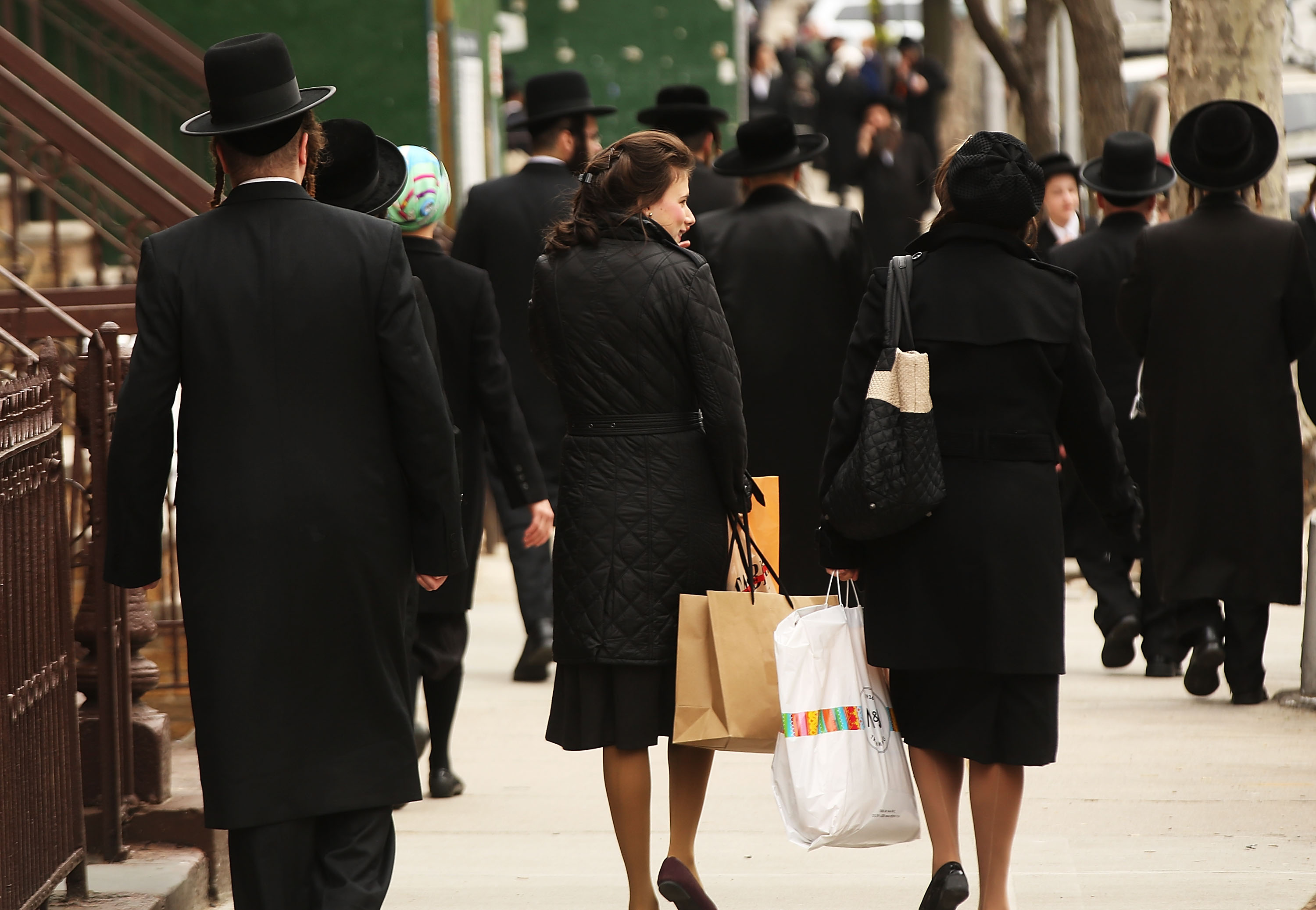 Hasidic men and women walk through a Jewish Orthodox neighborhood in Brooklyn on April 24, 2017 in New York City. According to a new report released by the Anti-Defamation League (ADL), anti-Semitic incidents in the U.S. rose by 86 percent in the first three months of the year. The group’s audit of anti-Semitic events counted 541 anti-Semitic attacks and threats in the first quarter of the year, a significant increase over the same period last year. (Photo by Spencer Platt/Getty Images)

The racial makeup of the perpetrators of the hate crimes does not appear in question. For example, City Councilman Chaim Deutsch, who represents part of Brooklyn, confirmed that most of the Crown Heights attacks were by African-Americans, and community activist Rabbi Yaacov Behrman, director of Operation Survival, said that of at least two dozen cases of anti-Hasidic attacks he’s aware of in the last year, all but two were by blacks. (The other two were by people of indeterminate race.) Behrman complained that the media blames the spike in hate crimes “on the far right” whereas locally people understand the attacks in the local context.

Every Brooklyn resident interviewed for this story strongly rejected the idea that forces often linked to President Trump had anything to do with the attacks. Mendy said that the attackers “aren’t white supremacists wearing MAGA hates and shooting up black churches.”

As for de Blasio, New York Councilman Kalman Yeger, who represents a district in Brooklyn, praised the mayor for “standing up tall and forcefully against anti-Semitism” but said he did not see a causal link between the president’s rhetoric and the attacks.