The specter of boys commandeering girls’ trophies and showering alongside them in high school locker rooms has mesmerized Americans who are concerned about the pending Equality Act prohibiting anti-LGBT discrimination. The bill is expected to get a vote in the House this week, and is sponsored by nearly the entire Democratic caucus.

But the law’s architects designed it to have far more sweeping effects. The Equality Act is not a stand-alone bill guaranteeing LGBT people a certain set of rights. It is a lengthy amendment to the landmark 1964 Civil Rights Act adding, among other things, 29 new places discrimination would be illegal not only regarding sexual orientation and gender identity but to all protected classes. 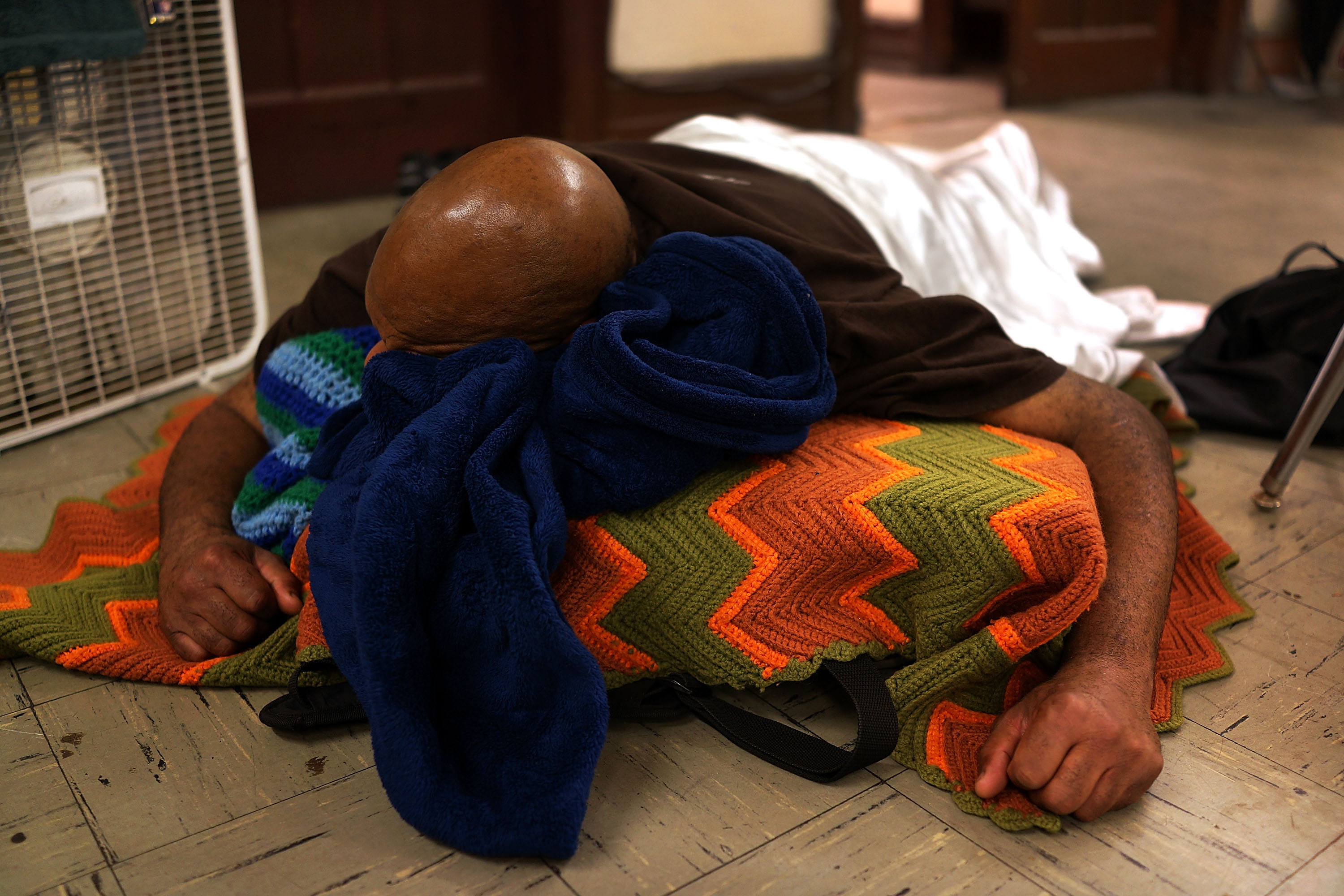 A man sleeps inside of a church which serves as a shelter in the evenings on October 22, 2014 in Philadelphia, Pennsylvania. The program for homeless men is run by the Bethesda Project which serves more than 2,500 homeless and formerly homeless men and women each year at 14 sites throughout Philadelphia. One of the nation’s largest and most historic metropolitan areas, Philadelphia has become the poorest big city in America. (Photo by Spencer Platt/Getty Images)

Mixing and matching from each column suggests drastic — and unanticipated — implications of the proposed law:

1) Dating apps aimed at specific communities like J-Swipe (Jewish), Mutual (Mormon), MiCrush (Latino), and ChristianMingle could be forced to shut down or radically change missions. New Jersey’s version of the Equality Act was used in 2010 to force the Christian-run eHarmony.com to stop its policy of matching only male-female couples.

2) A battered women’s shelter could no longer turn away men to keep female residents feeling safe. A man would not have to claim he was female to gain access, just that he was abused.

3) Similarly, a social-services organization providing food and shelter to “street kids” would be required to cater to 40- and 50-year-olds on an equal basis, even if that would destroy the agency’s mission.

4) Hair salons would not be able to charge women more, even if cutting women’s hair requires more time and skill. Currently, gender-based price discrimination is illegal only in California (although some courts elsewhere have also outlawed it).

5) Kosher food banks could be forbidden from favoring clients who need groceries meeting strict religious needs, since that would discriminate against non-Jews.

The Equality Act includes other stealth changes to the original Civil Rights Act such as allowing people who are NOT minorities to sue for discrimination by alleging that their employer may have thought they were a minority; and allowing women to sue stores if other shoppers make unwanted sexual advances because stores would have a new legal “obligation to prevent and address sexual harassment.”

Polls suggest that most Americans would favor a simple law saying you can’t fire someone for being gay any more than you can fire them for being black. And the Employment Non-Discrimination Act introduced in 1994 said just that.

But a quarter-century later, as the political influence of the LGBT community has grown, its expectations have mushroomed — and the bill currently in front of Congress infringes on the rights of people who are not gay in ways that go far beyond high school P.E.

For example, the law would give gays an absolute right to serve on juries even in cases in which sexual orientation is at issue. That means the lawyer of someone on trial for a hate crime or alleged anti-LGBT discrimination could do nothing to prevent a transgender person — or two, or three — from serving on the “impartial jury” guaranteed to the accused by the Sixth Amendment.

The law would gut the bipartisan Religious Freedom Restoration Act of 1993. People could continue to seek relief from government infringement on their ability to practice their religion — unless their claim related to sexual orientation and gender identity in any way, in which case they couldn’t even ask.

That would affect not just the high-profile Christian bakers and florists struggling to express their ideas through their artisanship. It would extend its reach to all future, unanticipated conflicts between a person’s conscience and the law in this area.

For example, in five years the main religious freedom vs. gay rights battleground could involve Christian rock bands being forced to play gay weddings. Instead of allowing the country to have a debate about the free-speech and free-exercise aspects of the conflict, the result will have been preordained in 2019 when the Equality Act preempted such discussions.

Equality Act advocates have been claiming that 70 percent of the country, including a majority of Democrats, Republicans, and independents, support a bill “like the Equality Act.” However, respondents to that PRRI survey said only that they “favor laws that would protect, gay, lesbian, bisexual, and transgender people against discrimination in jobs, public accommodations and housing” — which is but a small portion of the Equality Act’s reach.

A vote is expected in the House this week.