Since the early stages of the Trump campaign, economists, politicians and journalists have warned a trade war with China could torpedo the U.S. economy. But even as President Donald Trump prepares to escalate the ongoing conflict with another round of tariffs on Chinese imports, the domestic economy continues to thrive.

Unemployment is at historic lows, an average of more than 200,000 jobs are being added each month and GDP rose 3.2% in the first quarter of 2019. In the manufacturing industry, where experts predicted severe damage, the economy has added nearly 500,000 jobs since Trump took office, according to the White House. The National Association of Manufacturers quarterly outlook survey found optimism in the industry is the highest it has been since they began conducting it 20 years ago. 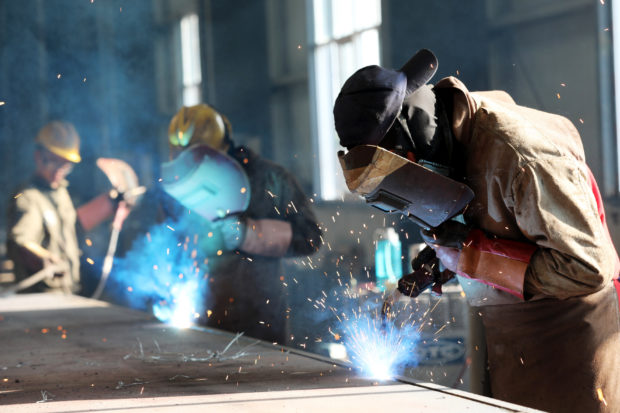 This photo taken on May 3, 2018 shows a worker cutting steel at a factory in Huaibei in China’s eastern Anhui province. (AFP/Getty Images)

Trump downplayed the ongoing trade battle Tuesday, calling it a “little squabble,” and spoke positively of its effects on the steel and auto industries. His remarks, and the numbers so far, are in sharp contrast to the doomsday predictions of massive job losses and a global recession on par with the Great Depression that have permeated the press for years now. (RELATED: China Is Picking Up The Tab For Trump’s Trade War: Report)

“If Donald Trump launches a trade war with China it would likely result in catastrophic losses for both nations and possibly a humbling defeat for the United States, some have warned.” — NBC News

“Donald Trump’s threats to slap steep tariffs on Chinese and Mexican imports may have won him votes in Republican primaries but they would likely backfire, severely disrupting U.S. manufacturers that increasingly depend on global supply chains.” —Reuters

“Economists warn that a clash could backfire, reducing U.S. exports and putting one million U.S. jobs at risk.” — The Wall Street Journal

“…protectionism is a beast that will gore us if set loose.” — US News & World Report

“The economic harm that his tariff wall would have on the average American is shocking.” — Quartz

“We can do it, but when it’s all said and done the only person who could afford a light fixture would be Donald Trump,” —entrepreneur Ben Schwall, speaking to CNN Business.

“… within a year the United States would probably tumble into a recession.” — Washington Post opinion columnist, citing the findings of a Moody’s Analytics model.

“The tit for tat would lead to shutdowns and layoffs in all three countries [China, US, Mexico], and could tip an already shaky global economy into recession.” — Will Marshall, president of the Progressive Policy Institute, speaking to The Daily Beast.

“A trade war would devastate jobs as exports nose-dive.” — The Fraser Institute

“In a worst-case scenario, unemployment would increase to 8.6 percent by the end of Trump’s first term if the Republican nominee incites a full-blown international dispute over trade policy.” — The Washington Post, citing a Peterson Institute for International Economics forecast.

“Were Trump to start a trade war, the most immediate effects would probably be felt by companies like Walmart, which imports billions of dollars of cheap goods that are bought mostly by the people who voted Trump into office. The prices on almost all of these items would quickly skyrocket beyond the reach of the lower economic brackets, not because of manufacturing costs, but because of the tariffs.” — The Hill in a report headlined, “The US would lose a trade war with China, ‘bigly'”

“To be frank, the US economy cannot afford the cost of unemployment and price increases for millions of Americans who now benefit from US-China economic ties, and who would lose their jobs and livelihoods as the inevitable consequence of a trade war.” — Financial Times

“We’re not talking Great Depression, but something as severe as anything experienced since.” — Economist who co-authored a Peterson Institute report, speaking to the Center for Public Integrity

“Like in any other war, everyone will lose in this war except for one group. They will win because demand for their services will skyrocket. Who are these lucky people? They aren’t people at all. They’re robots.” — Forbes

“Claims that protectionism would inevitably cause a recession are overblown, but there’s every reason to believe that these indirect effects would eliminate any net job creation.” — Paul Krugman in a New York Times op-ed

“Getting his way would have dire consequences. At the very least, it would snuff out the global recovery that’s finally gaining momentum. History suggests there are even worse potential consequences. It was, after all, a trade war between the US and European nations that helped mire the world economy in the Great Depression.” — Quartz

“If the president goes through with this, it will kill American jobs — that’s what every trade war ultimately does.” — Republican Nebraska Sen. Ben Sasse, quoted in a New York Times story headlined, “Trump’s Steel Tariffs Raise Fears of a Damaging Trade War”

“A trade war does no good to anyone. There is no winner.” — China premier Li Keqiang quoted in a CNN story headlined, “Trump hits China with tariffs, heightening concerns of global trade war”

“… the tariffs are acting, as one would expect them to act, as a tax on American consumers, raising domestic prices and slowing the domestic economy.” — The Atlantic

The planned escalation “dramatically expands the harm to American consumers, workers, businesses, and the economy.” — The U.S. Chamber of Commerce in prepared testimony cited by The Washington Post

“John McCann of MEC Aerial Work Platforms in Kernan, CA painted a stark picture, saying ‘tariffs will cause layoffs, lives will be devastated, the hope and optimism that comes from meaningful work will be gone.'” — Business Insider

“… a trade war, [economists] say, could ‘push the economy toward full-blown recession’ and jeopardize America’s economic expansion — the second-longest on record.” — PBS News

“Expert: ‘We are worse off as a world’ amid Trump’s trade war” — Yahoo! News

“There are no real winners in this U.S.-initiated trade war. Countries facing new tariffs, including the United States, experience declines in real exports and GDP.” — Newsweek, citing a 2018 report from a London-based company

“Trump has Promised to Bring Jobs Back. His Tariffs Threaten to Send Them Away” — The New York Times

“China Is Losing Trump’s Trade War, And So Are We, Because Everyone Loses in Trade Wars” — New York Magazine