San Francisco banned a piece of technology police used in 2018 to identify a man who shot and killed several people at a Maryland newspaper.

The city’s Board of Supervisors voted 8-1 Tuesday to make San Francisco the first major American city to block a tool police rely on to identify criminal suspects, The New York Times reported. Civil liberty groups worry the technology’s potential could push the U.S. in the direction of an overly oppressive surveillance state.

“I think part of San Francisco being the real and perceived headquarters for all things tech also comes with a responsibility for its local legislators,” Aaron Peskin, the city supervisor who sponsored the bill, told TheNYT. “We have an outsize responsibility to regulate the excesses of technology precisely because they are headquartered here.”

Critics argue San Francisco is effectively tossing the good out with the bad.

“It is ridiculous to deny the value of this technology in securing airports and border installations,” Jonathan Turley, a constitutional law expert at George Washington University, told reporters. “It is hard to deny that there is a public safety value to this technology.” 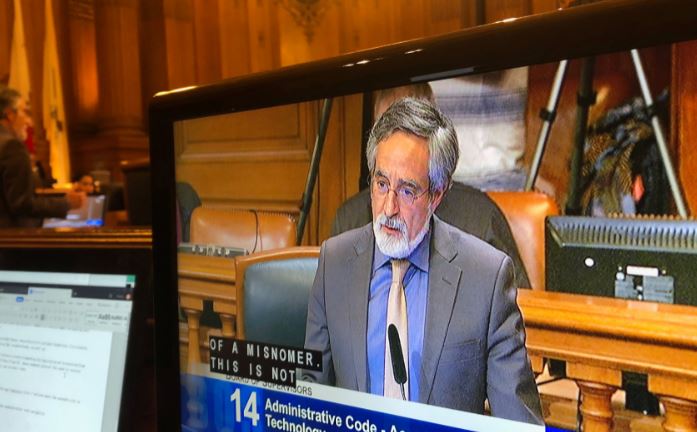 City Supervisor Aaron Peskin speaks before a vote on a surveillance technology ordinance that he sponsored, in San Francisco, California, U.S., May 14, 2019. REUTERS/Jeffrey Dastin

The technology “provides government with unprecedented power to track people going about their daily lives. That’s incompatible with a healthy democracy,” Matt Cagle, a lawyer with the ACLU of Northern California, told reporters, noting such tools are a danger in the hands of the government. (RELATED: Capital Gazette Shooting Is The Largest Mass Shooting Of Journalists In America)

Another vote is set to take place within the week, but it is “seen as a formality,” according to TheNYT.

The technology is used in several cities across the country, but is not being deployed in San Francisco, despite local concerns. Police believe the decision hinders their job nonetheless. Authorities used a similar piece of technology to identify a person who shot and killed several people in 2018 at the Capital Gazette newsroom in Annapolis, Maryland.

“Although we understand that it’s not a 100 percent accurate technology yet, it’s still evolving,” Tony Montoya, the president of  San Francisco Police Officers Association, told reporters. “I think it has been successful in at least providing leads to criminal investigators.”