New York Sen. and presidential candidate Kirsten Gillibrand defended her decision to participate in a Fox News town hall, during a Wednesday appearance on MSNBC.

Gillibrand’s defense came in response to a question about fellow presidential candidate Massachusetts Sen. Elizabeth Warren, who announced the day before that she would not go on the cable news network because it is “a hate-for-profit racket that gives a megaphone to racists and conspiracists.”

“You made the argument with me before that you plan to fight, if elected, for the entire country, every American,” Stephanie Ruhle began. “Recently, Elizabeth Warren turned down an invitation to participate in a town hall on Fox News. You’re going to be holding one on the network two-and-a-half weeks from now. Why did you accept, and what do you think of her response?”

My belief is that [the] president of the United States needs to represent everyone, and I’m going to ask every voter for their vote, regardless of where they live, whether they’re in a red state or purple state or blue state. And I believe you need to meet voters where they are, and a lot of America happens to watch that network. So I would like to do a town hall so I can speak to all Americans about their values, their views, their priorities and where I stand and what my vision for this country is and my experience to actually realize that vision—whether it’s health care, whether it’s education or jobs. I have a record of actually bringing people together and getting things done.

Gillibrand is one of four candidates either to have appeared or been scheduled to participate in Fox News town halls. Thus far, independent Vermont Sen. Bernie Sanders and Minnesota Sen. Amy Klobuchar have already hosted a town hall on the network. The ratings for Sanders’ appearance ranks first among presidential town halls this election cycle, while Klobuchar comes in at third. 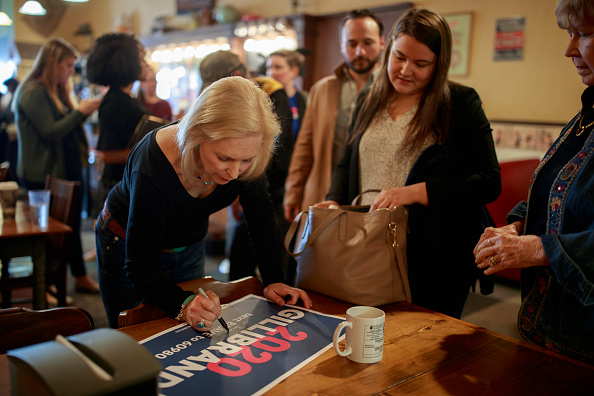 CRESTON, IOWA, UNITED STATES – 2019/04/18: New York Democratic Senator Kirsten Gillibrand campaigns for President of the United States as she sign autograph for a supporter during a “listening tour” stop at at the Adams Street Espresso & Soda Shoppe in Creston, Iowa. (Jeremy Hogan/SOPA Images/LightRocket via Getty Images)

“Pete’s been clear throughout this campaign that he plans to meet voters where they are. It doesn’t do us any favors to communicate within partisan silos…” the Buttigieg campaign told Amy B. Wang of The Washington Post. “And you will see him go on a wide variety of news outlets and platforms because he respects and wants to communicate with voters—no matter their preferred news source.”