The College Board is going to assign a secret “adversity score” to students who take the SAT in an apparent attempt to help colleges get around a potential Supreme Court ruling on race-based admissions.

The score will be assigned to every single student who takes the test, but students will not know what the score is, and the College Board is not disclosing how the score is determined, The Wall Street Journal reports.

Colleges will see the 1-100 score, called the “Overall Disadvantage Level” when they view a student’s test results. Anything over 50 designates hardship.

The move is an attempt to do away with differences in test scores that result from disparities in wealth and education and preempts a ruling from the Supreme Court on race-based affirmative action. Several college admissions officers told The WSJ the tool will be especially useful if the Supreme Court bans race-based admissions.

“The purpose is to get to race without using race,” Anthony Carnevale, former employee of the College Board and director of Georgetown University’s Center on Education and the Workforce, told The WSJ.

A group representing Asian American students has filed a lawsuit against Harvard University claiming admissions officers discriminate against them by penalizing them as a group for high test scores in order to get a more diverse student body. (RELATED: Harvard Students Testify: ‘Race-Blind Admissions Is An Act Of Erasure’) 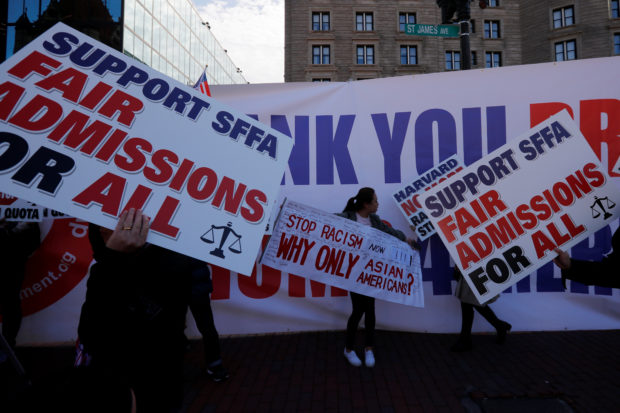 The College Board would not say how it makes the score or weighs the 15 factors considered, which include poverty levels based on a student’s address and the crime rate in his or her neighborhood. The score will be based on public records, including the U.S. Census, and other sources “proprietary” to the College Board, an official told The WSJ. It does not include race.

The ACT plans to announce a similar score later this year.

“If  I am going to make room for more of the [poor and minority] students we want to admit and I have a finite number of spaces, then someone has to suffer and that will be privileged kids on the bubble,” John Barnhill, assistant vice president for academic affairs at Florida State University, told The WSJ.

FSU was part of a beta test of the score last year, and Barnhill said the score resulted in a 5% rise in nonwhite enrollment.