Democratic presidential candidate and Sen. Kirsten Gillibrand said Wednesday the party should purge its ranks of members who do not support abortion.

Gillibrand noted Democrats have become more extreme in their pro-abortion rhetoric in recent years, and said the party should not “settle” for anything less than across the board compliance with a pro-abortion platform.

“As a party, we should be 100 percent pro-choice, and it should be non-negotiable,” Gillibrand told The Washington Post. “We should not settle for less, and if our party cannot support women’s basic human rights, their fundamental freedoms to make decisions about their bodies and their futures, then we are not the party of women.” (RELATED: Bernie Says ‘Abortion Is A Constitutional Right’) 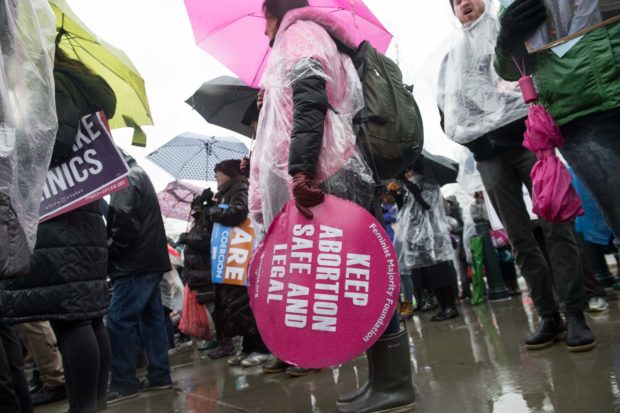 Pro-abortion activists demonstrate in front of the US Supreme Court in Washington, DC, on March 20, 2018 as the court hears a challenge to California law requiring anti-abortion pregnancy clinics to distribute information on family planning services. (NICHOLAS KAMM/AFP/Getty Images)

Most Democrats have dropped the “safe, legal and rare” mantra, she noted, and speak forthrightly about their push for broad and easy access to abortion in the name of “reproductive rights.”

Democrats do indeed seem to be veering left on abortion, and some have already moved to get rid of their pro-life members. In a move seemingly indicative of their shifting stance, Democratic state Rep. Brian Sims recently bullied pro-life women and teens praying outside a Planned Parenthood clinic in Philadelphia. (RELATED: The Planned Parenthood Where Brian Sims Harassed Pro-Lifers Is A Mess)

A February Marist poll found Democrat voters are moving in the opposite direction on abortion — the number who say they are pro-life rose 14 percent in a one-month span, according to the poll.