An illegal alien from Kenya has been charged in the deaths of 12 elderly women in Texas, and at least one major media outlet has so far ignored what could be one of the most prolific serial slayings in American history.

Billy Chemirmir, a 46-year-old former healthcare worker, had already been charged with capital murder in March 2018 in the death of Lu Thi Harris, 81, but was indicted on Tuesday for 11 additional deaths: five in Collin County and six more in Dallas County.

Court records show that Chemirmir, a citizen of Kenya living illegally in the United States, allegedly smothered his victims with a pillow and then robbed them, according to The Dallas Morning News.

After Chemirmir’s initial arrest, authorities told reporters their plans to review around 750 cases of unattended deaths of elderly women for links to Chemirmir, some of which had already been ruled as natural causes.

He was indicted Tuesday in the deaths of six Dallas County women:

Details about the new Collin County indictments were not immediately available on Wednesday evening.

Additionally, Chemirmir is charged with attempted capital murder for allegedly trying to suffocate two other Collin County women. He also allegedly attacked a 93-year-old woman in 2017 at a Frisco assisted living facility.

The Washington Times described how police investigating one of the Collin County attacks were able to break the case:

The break in the case came when Chemirmir forced his way into the Plano apartment of a 91-year-old woman that March, telling her to “go to bed. Don’t fight me,” according to an arrest affidavit filed in Collin County. The woman was smothered with a pillow into unconsciousness and robbed. However, paramedics revived her and she told investigators that her attacker had stolen a box containing her jewelry. Police identified Chemirmir from a license plate number and were able to find and tail him days later, when they watched him throw a jewelry box into a trash bin. They traced the box to Harris, according to the affidavit.

According to one victim’s statement to police, the accused serial killer allegedly pretended to be a maintenance worker in order to attempt to gain entrance to her apartment. When she told him she didn’t need any work done, he knocked the victim from her walker as he forced his way inside, then tried to smother her with a pillow from her couch. (RELATED: 10 Illegal Immigrants Arrested After Jumping Out Of Car During Traffic Stop)

CNN so far has chosen not to cover the case, as was first noted on Twitter by The Daily Wire’s Ryan Saavedra:

CNN has still not reported on this pic.twitter.com/iBCrVGircR

As of 10 p.m. Eastern time, a search for “Billy Chemirmir” returned zero results on CNN’s website: 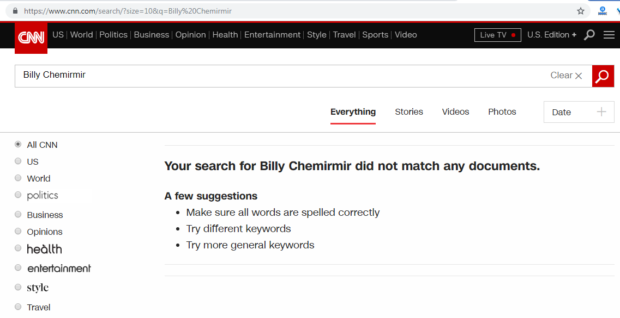 Meanwhile, Fox News, ABC, and NBC were other major media outlets to cover the story thus far. NBC, however, has so far left Chemirmir’s immigration status out of their coverage.

Chemirmir is also being charged with being in the United States illegally.