Facebook blocked Trump 2020 campaign advisory board member Jenna Ellis Rives from sharing a screenshot of a tweet by citing “hate speech,” but Rives believes this is a part of a deliberate attempt to censor conservative commentary until it is no longer timely.

Rives took a screenshot of a tweet from conservative commentator Matt Walsh and attempted to post it to Facebook Wednesday night, captioning the photo only with an emoji. The tweet references several progressive viewpoints and implies that these viewpoints are incongruent with one another.

“Gender is a social construct but I am woman hear me roar but anyone can be a woman but no uterus no opinion but transwomen are women but I demand women’s rights but men are women but men are scum but drag queens are beautiful but appropriation is evil,” Walsh’s Tuesday tweet reads.

When Rives posted the picture, she immediately received a notification from Facebook telling her, “Your post goes against our Community Standards on hate speech. No one else can see your post. We have these standards because we want discussions on Facebook to be respectful.” 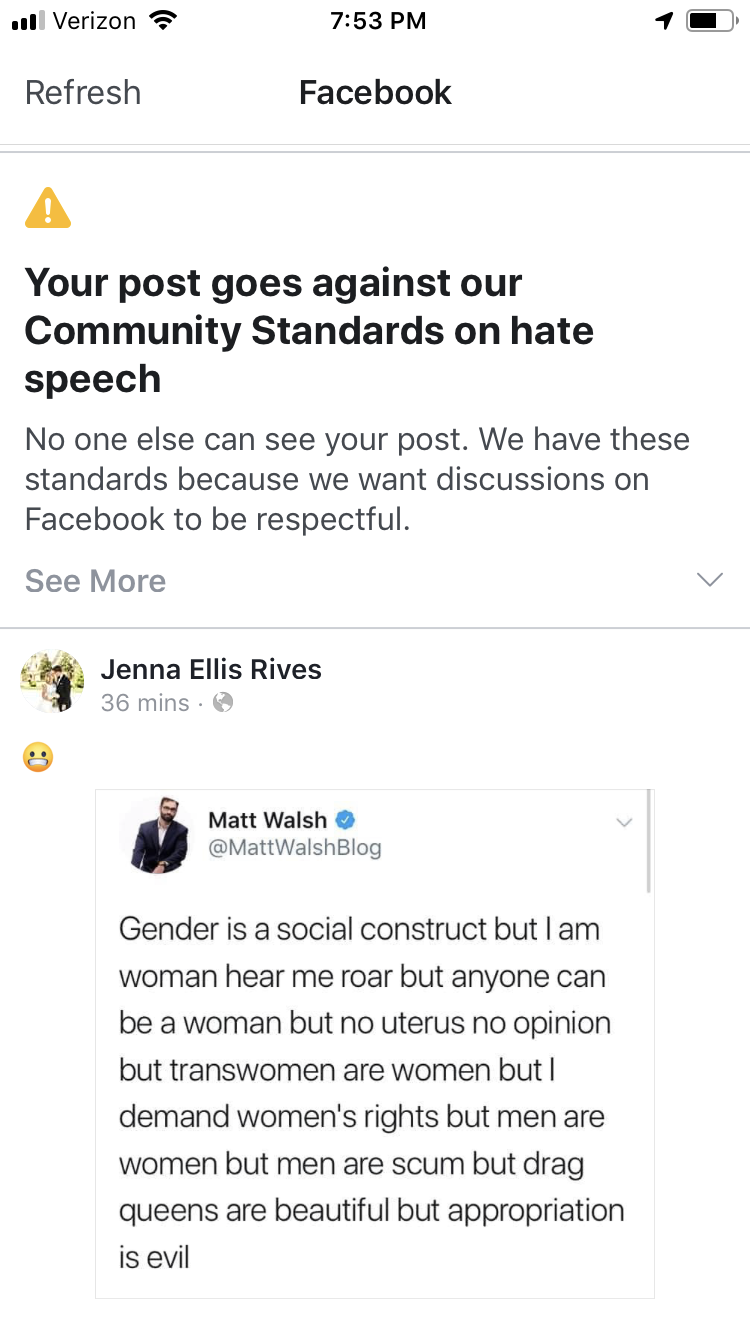 Pictured is a screenshot of Jenna Rives’ blocked post and message from Facebook. Screenshot provided by Jenna Rives.

Rives also attempted to post a photo of Facebook’s message to her with the caption “Really, Facebook?” but received the same automated message from Facebook upon doing so. The social media company has yet to respond to a complaint Rives filed.

This is not the first time she has been censored, Rives told TheDCNF. Rives said she has experienced censorship twice in this fashion and believes that “Facebook will censor conservative commentary of what is going on in the news.” (RELATED: Here’s What Facebook And Google Did Not Discuss During Hearing On White Nationalism)

Rives, who is also a constitutional law attorney and author, wrote an op-ed for The Washington Examiner on Aug. 22, 2018 titled “Democrats are overreacting to the Michael Cohen guilty plea.” Rives wrote the op-ed before she began working on the Trump advisory board. Rives said that the piece, which discussed what she called the dual nature of former Trump lawyer Cohen’s guilty plea, quickly went viral.

Facebook pulled the article down for 24 hours, flagging the article as spam and telling Rives that the piece did not follow Facebook’s community standards. Rives pointed out that the news cycle had moved along by the time her article was unblocked and that this censorship is a purposeful technique intended to control the political narrative at “key moments.” 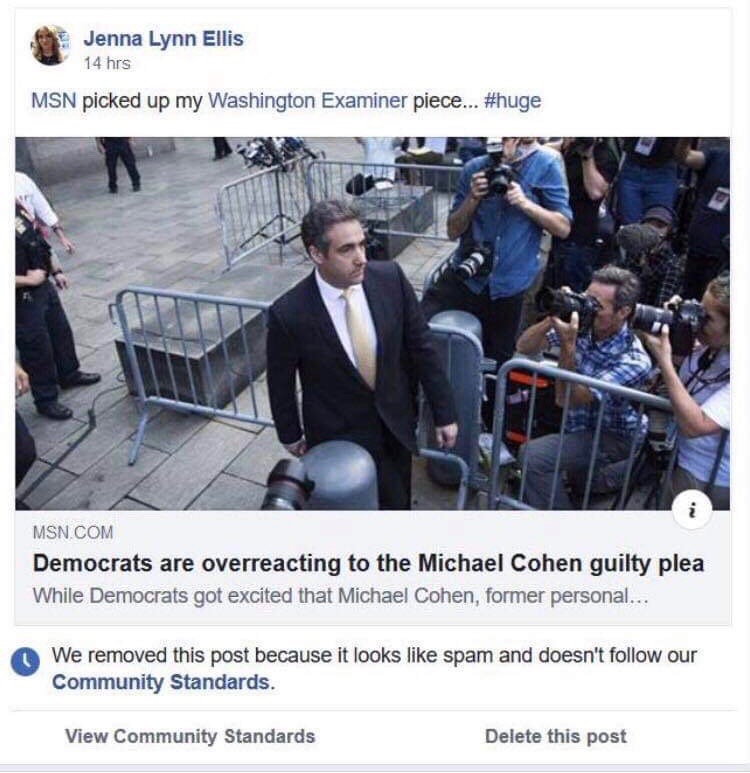 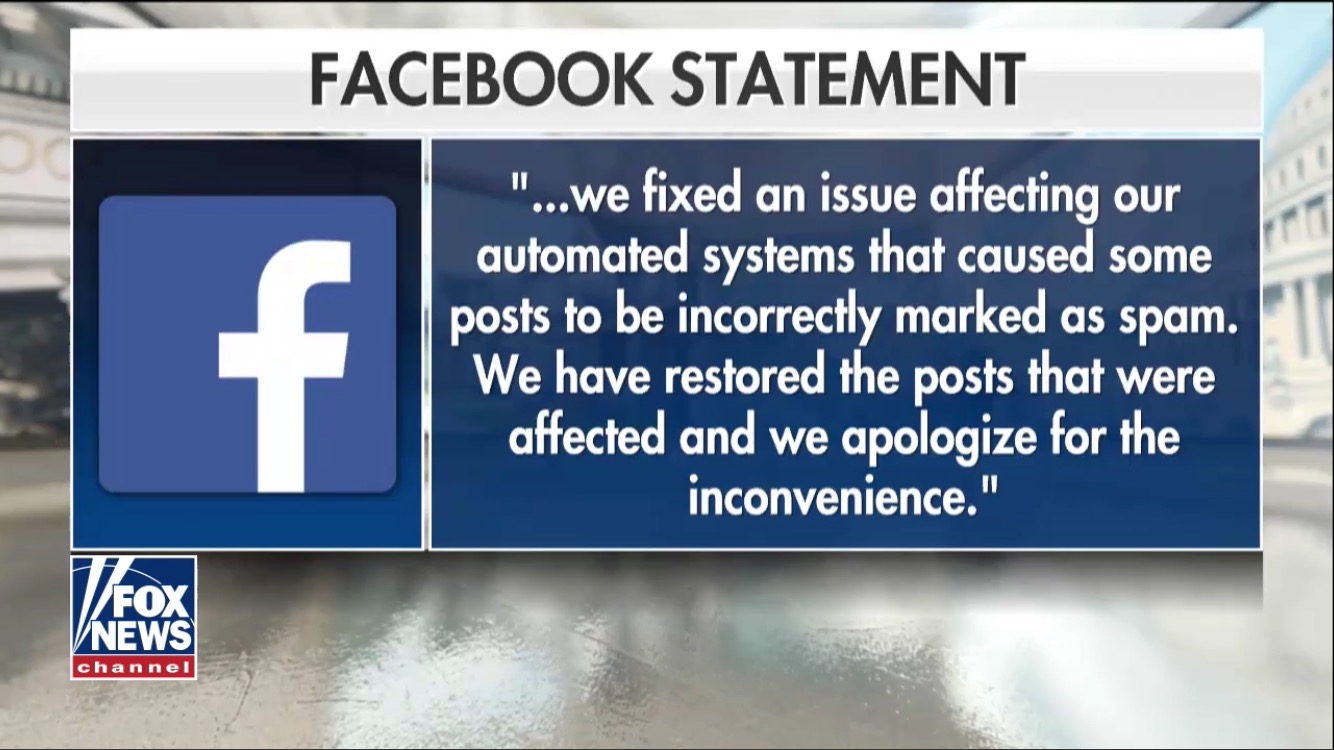 Pictured is a screenshot of Facebook’s statement regarding its censorship of Jenna Rives article. Screenshot provided by Jenna Rives.

“They will censor it for 24 to 48 hours then come back and blame an algorithm,” Rives said to TheDCNF. “That is not timely enough to participate in the news cycle.”

This is no algorithm fluke, Rives says. “Very specific prominent conservative voices are being censored in key moments,” Rives told TheDCNF. “It’s now happened to me at least twice in very key moments, whether it is an attack on President [Donald] Trump or an attack on the pro life movement.”

Rives wants Congress to take a good look at how social media giants operate. “For social media giants to claim that they are a platform for free speech is not accurate,” she told TheDCNF. “Congress needs to look at this. … Are they a public utility or a private publishing platform? They can’t have it both ways.”

Rives spoke with news anchor Neil Cavuto about the incident involving her op-ed in an August Fox News segment. Facebook told Cavuto that Rives’ article was incorrectly marked as spam.

Facebook lists its community standards as “comprehensive” standards intended to apply to content around the world. “They’re designed to be comprehensive – for example, content that might not be considered hate speech may still be removed for violating our bullying policies,” the Facebook Community Standards page says. “The goal of our Community Standards is to encourage expression and create a safe environment. We base our policies on input from our community and from experts in fields such as technology and public safety.”

“We also provide some protections for immigration status,” the Facebook page on hate speech continues. “We define attack as violent or dehumanizing speech, statements of inferiority, or calls for exclusion or segregation.”