The comment in question was said by Trump during a Thursday press briefing on his new immigration plan. The president was explaining how legitimate asylum seekers are being displaced “by those lodging frivolous claims.” Acosta took his words out of context to appear like Trump said asylum seekers, in general, are “misleading immigration authorities” with “frivolous claims.”

How can you do this and go home at night thinking you’ve turned in an honest day’s work as a journalist?

Here are the president’s full comments:

We must also restore the integrity of our broken asylum system. Our nation has a proud history of affording protection to those fleeing government persecutions. Unfortunately, legitimate asylum seekers are being displaced by those lodging frivolous claims. These are friviolous claims to gain admission into our country. Asylum abuse also strains our public school systems, our hospitals and local shelters, using that we should, and that have to go to elderly veterans, at risk youth, Americans win poverty, and those in genuine need of protection. We’re using the funds that should be going to them. And that shouldn’t happen. And it’s not going to happen in a very short period time. Have to get this approved. My plan expedites relief for legitimate asylum seekers by screening out the meritless claims. If you have a proper claim, you will quickly be admitted. If you don’t, you will promptly be returned home. 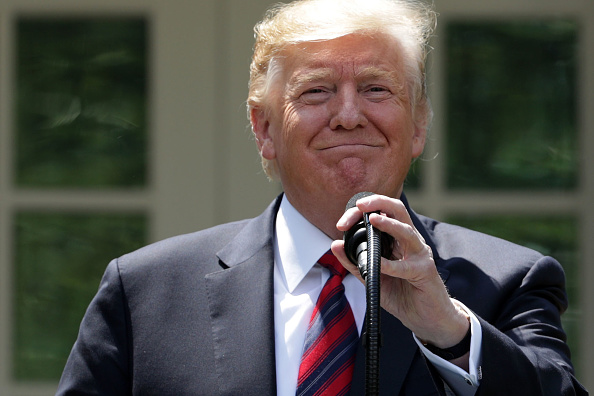 WASHINGTON, DC – MAY 16: U.S. President Donald Trump speaks during a Rose Garden event on immigration at the White House May 16, 2019 in Washington, DC. (Alex Wong/Getty Images)

Trump’s plan to secure the border calls for infrastructure (a wall) at 33 specific locations, an updating of entry ports, and expedited immigration court proceedings and removing processes. The administration also hopes to change the visa system to reward highly-skilled immigrants.

Trump’s immigration plan also does not include any solutions to the DACA system, which likely means the legislation will be dead on arrival for the House Democrats.