A VA clinic in Florida is backtracking after initially refusing to provide accommodations to a blind veteran.

He has been legally blind for approximately the last four years.

Last month, he went to his local Daytona Beach community-based outpatient clinic (CBOC) after his eyes were bothering him.

He was accompanied to the clinic by an old friend, Sean Higgins, a former employee and repeated whistleblower at the Memphis VA Medical Center, who was in town visiting family. (RELATED: Feds Apologize After Veterans Affairs Removed Bible: ‘Will Not Be Bullied On This Issue’)

Higgins said that while at the clinic the two inquired about receiving accommodations so that Bryan could be driven to appointments by VA staff.

After speaking to numerous staff members, Bryan said he was told he did not qualify for this assistance, and that only wheelchair-bound veterans qualify to be picked up.

This reasoning appears to contradict VA policy which states, “VA recognizes Veterans who are visually impaired, elderly, or immobilized due to disease or disability, and particularly those living in remote and rural areas face challenges traveling to their VA health care appointments.”

A phone call from The Daily Caller to the clinic was not returned. 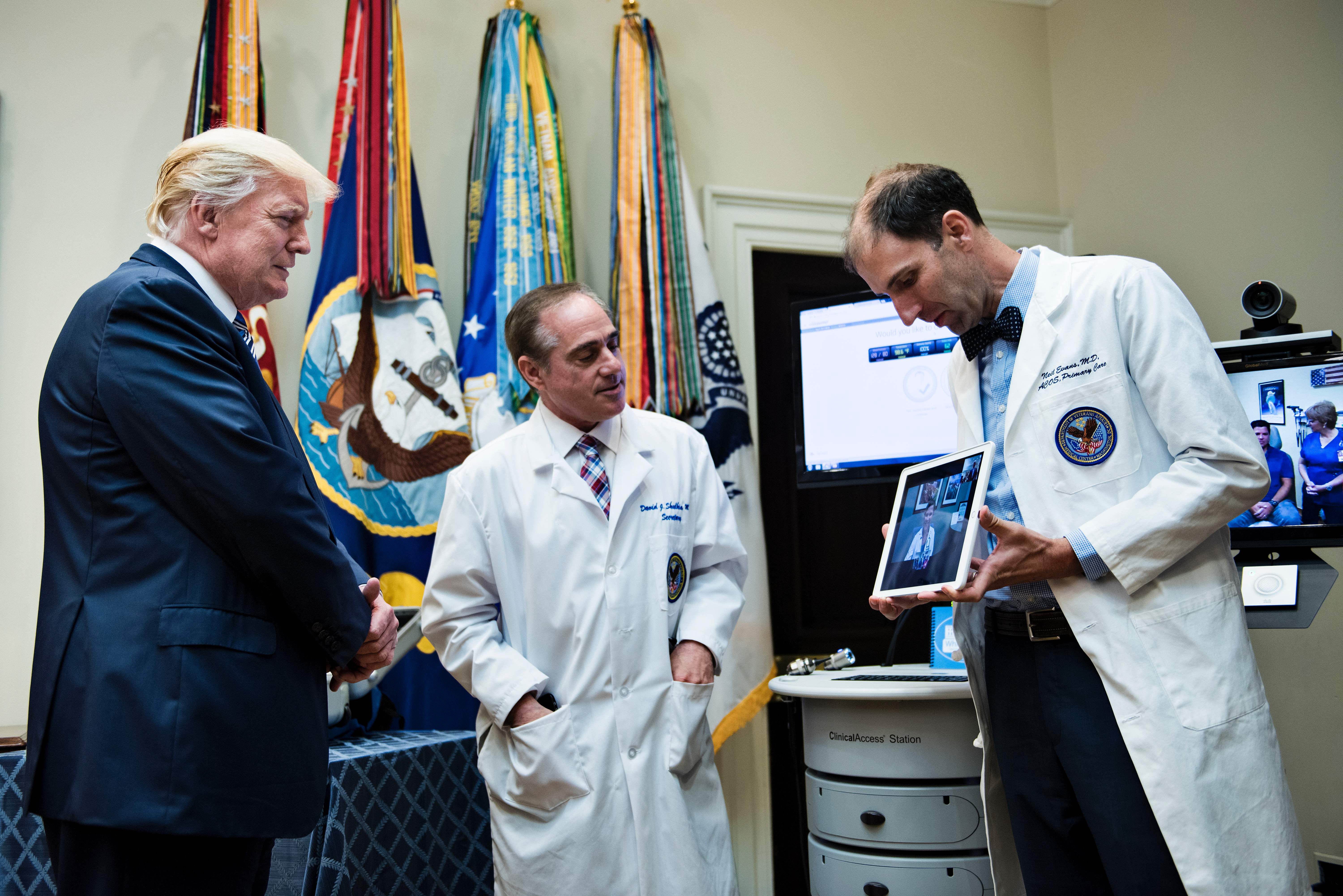 US President Donald Trump (L) and US Secretary of Veterans Affairs David J. Shulkin (C) watch a video conference with a patient after speaking about new technology used by the Department of Veterans Affairs during an event in the Roosevelt Room of the White House August 3, 2017 in Washington, DC. (Brendan Smialowski/AFP/Getty Images)

“On about 22 April Veteran made a trip to DAB CBOC with his advocate to inquire about why he could not get the benefit. He was informed by his social worker that he had to be wheelchair bound to get the benefit,” Higgins said in his email to Rubio’s staff. “The one question that should be asked in this situation: What is the difference [between] a legally blind veteran who needs assistance riding transportation [and] a wheelchair bound veteran who also needs assistance riding transportation? Do not they both require assistance? Neither can do it without assistance.”

Rubio’s office sent an email back saying Bryan’s case had been assigned to a caseworker.

After the Caller followed up with Rubio’s office as well as the Department of Veteran Affairs, Bryan said he received a flurry of calls.

Bryan said he received a call both from the VA and Rubio’s office within hours of The Daily Caller reaching out to them.

Higgins said the VA called him on May 16 and told him that Bryan was approved for transportation assistance.

“In a collaborative effort between Health Services Administration (HAS), Social Work Services (SWS) and DBOPC Primary Care, a review of Mr. Bryan’s record was conducted. It was determined that Mr. Bryan is clinically eligible for SMT (Special Mode Transportation) due to his clinical and functional limitations,” a letter sent by the VA to Senator Rubio’s office on May 16 stated.

Iocavella did provide answers from the VA to several questions their office asked.

The VA stated that Bryan’s transportation assistance would include: “Specifically for Mr. Bryan, who has been determined to be catastrophically disabled, this would mean that he has been approved for SMT for all VA or VA-approved appointments. SMT is coordinated by our Beneficiary Travel Section, with our contracted vendor for SMT (OWL Transportation) and when Veterans are scheduled for appointments it does include round trip from the departure address (usually Veterans Address) to appointment destination and back.”

The VA also told Rubio’s office that while special mode transportation is primarily for those in wheelchairs, “this does not mean that a Veteran who is not on a wheelchair would not be eligible. It is ultimately a clinical decision made by a Licensed Independent Practitioner (LIP) and based on the medical needs and clinically documented functional abilities and limitations.”

The VA said that Bryan is approved for this SMT for one year, and he would have to apply to renew it; one year approvals are “normal protocol,” according to the VA.

An email left with Curt Cashour, press secretary for the VA, was also not returned by press time.

Editor’s Note: Minutes after this story was published, the author received the following statement from the Orlando VA: “Due to privacy concerns, VA can’t discuss the specifics of its interactions with individual Veterans, but we have contacted Mr. Bryan directly to address his concerns.”