Florida Republican Gov. Ron DeSantis expressed his frustration on Friday with a U.S. Border Patrol plan that would fly around 1,000 migrants every month to two Florida counties.

Although there are no immediate plans to relocate the migrants, both Broward and Palm Beach counties, part of the agency’s “Miami sector,” could be part of several relocation sites that would serve as a release valve of sorts for a federal government already out of housing space for the seemingly unending migrant flow from Mexico and Central America, AP reported.

But DeSantis plans to tell President Donald Trump that his state should not be required to house more. 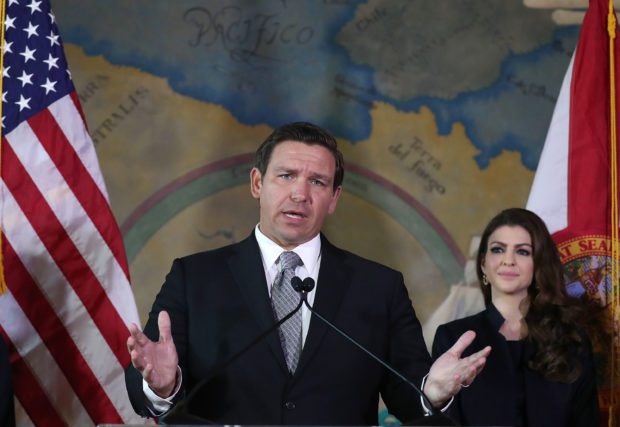 MIAMI, FLORIDA – JANUARY 09: Newly sworn-in Gov. Ron DeSantis speaks, as his wife Casey DeSantis stands near him, during an event at the Freedom Tower where he named Barbara Lagoa to the Florida Supreme Court on January 09, 2019 in Miami, Florida. (Photo by Joe Raedle/Getty Images,)

According to the report, the GOP governor was “caught off guard” after county officials were notified of the impending move, which could happen in as soon as two weeks. (RELATED: Joy Reid Suggests Florida Democratic Voters Might Be Racist)

“If you believe what was leaked and reported, the plan would be to simply put migrants out on the street,” he said. “This would be potentially just releasing people into our society. With someone just coming across the border, we have no idea what their background is, we don’t know what type of criminal activity they’ve been involved in. We don’t know anything.”

“I think it will tax our resources, the schools, the health care, law enforcement, state agencies,” the Florida governor added.

Adding that such a move would be the equivalent of “dumping” migrants on his state, DeSantis expressed frustration that Florida would receive the migrants even after he signed a bill banning so-called sanctuary cities.

“We’re going to work with them to help them remove criminal aliens,” he said. “We’re not going to be like some of these other states that are not allowing federal authorities to come into a jail or a courthouse. We’ve been very cooperative.”

DeSantis, a former Florida congressman, is close friends with President Trump and benefited from the president’s endorsement and campaign rallies in a close 2018 governor’s race. He is currently enjoying a high approval rating for his job so far as governor.