“Game of Thrones” made HBO an unreal amount of money over the past several years.

According to a release from ThinkMoney, the hit show generated more than $3 billion in subscription revenue since it first aired in 2011. (RELATED: These Are The Sexiest Photos Of ‘Game Of Thrones‘ Star Emilia Clarke On The Internet)

The eighth and final season alone was reportedly responsible for $528 million in subscription revenue. The same study indicated Jon Snow was the most profitable character at just north of $500 million. 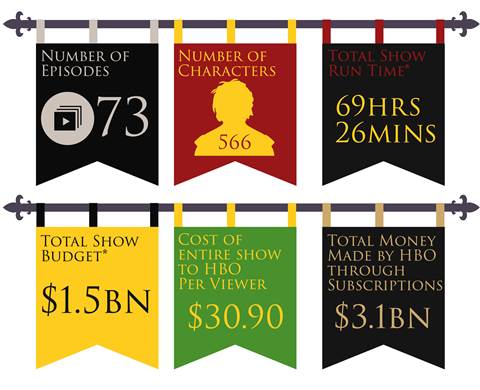 More than $3 billion! Despite the show ending in terrible fashion and ruining the series for millions of fans, there’s no doubt that’s an absurd amount of cash. (RELATED: ‘Game Of Thrones‘ Series Finale ‘The Iron Throne’ Is A Massive Disappointment)

That’s the type of money most networks couldn’t even dream of coming close to. Most networks would be ecstatic with hitting a few hundred million dollars. “GoT” blew that right out of the water.

Nothing else matters. Only us. #GameofThrones

I really do hope this update makes all the fat cats over at HBO happy. They’re swimming in money, and we’re left over here wondering what the hell happened to one of the greatest shows on TV.

The fact we’re so tortured and they made out like bandits might be even more “Game of Thrones” than the actual ending from the show.

It almost makes me sick to my stomach.

Either way, HBO made their money, the show was great for the most part and it broke the wheel when it came to television trends.