Democratic Minnesota Rep. Ilhan Omar expressed her “distaste for a lot of the kind of journalism” in the United States, during an edition of John Nichols’ “Nation’s Next Left” podcast released Tuesday.

The reaction from liberal media outlets was different than when President Donald Trump expressed similar sentiments.

“Your experience obviously influences not just who you are, but also your politics,” Nichols said. “You spent a substantial portion of your childhood as a refugee, in an exodus experience to some extent. Do you ever — were you conscious as a child of being buffeted about by geopolitical differences? I know your parents were educators. When did you start to become aware of the fact that politics and governments could have profound positive or very negative effects on people’s lives?”

“Yeah, I think I was aware of all of it actually quite young,” Omar responded. “You know, this is, this is — again, goes to my distaste for a lot of the kind of journalism we have here in the United States these days. I grew up really being glued to the news. Listening to BBC was very much part of my day-to-day life, from, like, four to eight [years old] in the most ways that I can remember.”

Though the podcast had been released approximately 15 hours before the publication of this story, the search terms “‘ilhan omar’ and ‘distaste for a lot of the kind of journalism'” yielded only two results, one of which was “The Nation’s” own story about the podcast. 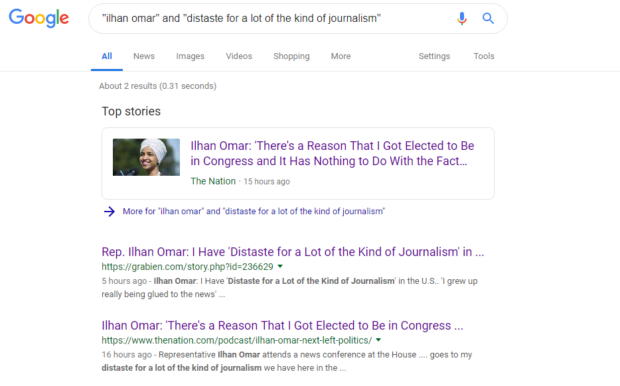 Meanwhile, the intentionally specific search terms “Trump and ‘war on journalism'” yielded 35,300 results, a significant disparity, even controlling for the fact that Omar is not president. The top result was an article by the LA Times editorial board titled, “Trump’s War On Journalism.” (RELATED: Trump Campaign Says The Media Is Its ‘Biggest Obstacle’ In 2020)

By branding reporters as liars, he apparently hopes to discredit, disrupt or bully into silence anyone who challenges his version of reality. By undermining trust in news organizations and delegitimizing journalism and muddling the facts so that Americans no longer know who to believe, he can deny and distract and help push his administration’s far-fetched storyline.

It’s a cynical strategy, with some creepy overtones. For instance, when he calls journalists “enemies of the people,” Trump (whether he knows it or not) echoes Josef Stalin and other despots.

Though criticism of the press has been a common practice of many past presidents, President Trump and members of his administration are roundly and routinely criticized, often in an apocalyptic manner, anytime they do so.