The Trump administration is disputing a new report that claims they’ve built less than 2 miles of border wall with nearly $2 billion in funding.

Bloomberg reported Wednesday that the U.S. government has managed to erect just 1.7 miles of bollard fencing with the $1.57 billion appropriated by Congress for wall construction in FY18. The figure came from a court filing by a lawyer for the U.S. House of Representatives and made its way onto the Drudge Report.

However, members of the administration say the report fails to fully capture the wall construction that is taking place at the southern border. 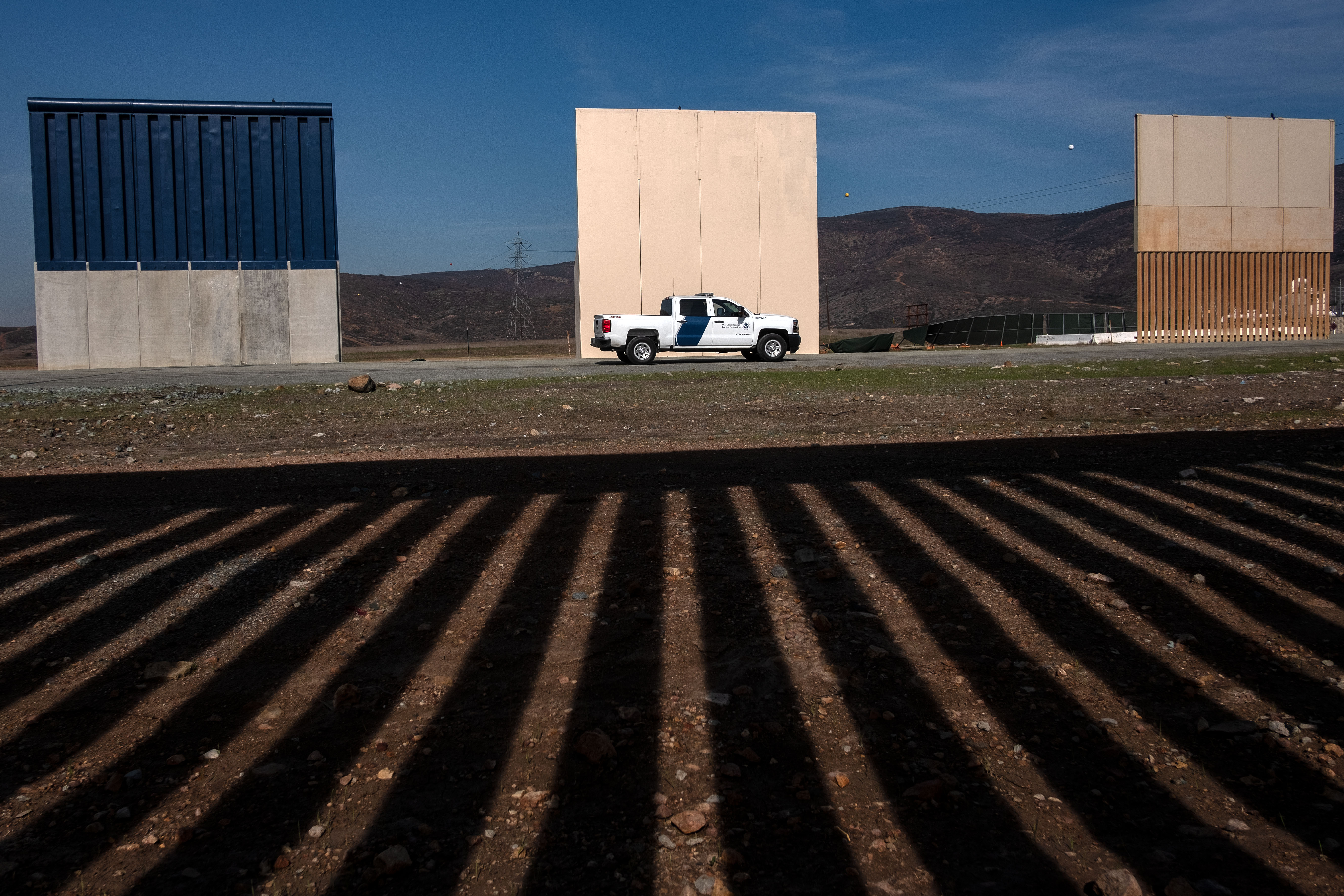 A Customs and Border protection vehicle passes by US President Donald Trump’s wall prototypes, as seen from behind the Mexico-US border fence in Tijuana, Baja California state, Mexico on December 12, 2018. (Photo by GUILLERMO ARIAS/AFP/Getty Images)

“The Bloomberg article is wrong,” a senior administration official told The Daily Caller. “The 1.7 miles are part of a 14-mile project specific to the San Diego Sector at a cost of $131 million (FY18 dollars). There are currently over 120 miles of new or replacement wall being constructed, and to say only 1.7 miles is completely false and misleading.”

“So normally for a federal project of this scope, from the time you get funded to starting, it’s over two years,” McAleenan said. “We’ve already built the [fiscal year] 2017 funding in less than two years. That shows how aggressively we’re moving out on this.”

The Bloomberg article’s headline, “U.S. federal wall funding of US$1.57B yields 1.7 miles of fence,” suggests that it cost nearly $2 billion to build under 2 miles of fence. That is not accurate, and the article itself makes clear that the funding number merely refers to what Congress appropriated for a number of projects last year.

According to a public release from U.S. Customs and Border Protection (CBP), the $1.375 billion appropriated in 2018 will be used to build approximately 80 miles of “updated and new” border wall.

The 14-mile San Diego project commenced in February 2019 and is on pace to be completed in early 2020.

The same chunk of funding will also go toward various other construction projects. Construction “activities” have started for 13 miles of new border wall in the Rio Grande Valley. Contracts have been awarded for the construction of 41 miles of new wall in San Diego and Calexico, California, and Yuma, Arizona, and the construction is expected to be completed in late 2020.

“An additional 12 miles of new border wall system in the RGV Sector is set for award by December 31, 2019,” CBP says.

An administration official told the Caller in March that approximately 74 miles of new or replacement wall was either completed or in progress with FY2018 funding.

While the actual construction with FY18 funding started relatively recently, the construction of new and replacement wall with FY17 funding is nearly complete.

The $292 million appropriated in FY17 was intended for 40 miles of new or replacement wall, and 39.5 miles have already been built in “the highest-priority locations,” such as San Diego and El Paso, Texas. The remaining half-mile is expected to be completed by June.

Using the entire $6.1 billion in funding that Trump has obtained through congressional appropriation and executive action from 2017 to 2019, CBP says there will be 86 miles of new primary wall and 24 miles of new levee wall built. They also expect to build approximately 158 miles of updated vehicle wall and updated secondary wall.

President Donald Trump appeared to take issue with the framing of the Bloomberg report, clarifying in tweets Wednesday that much of the wall construction consists of knocking down outdated and ineffective barriers and replacing them. The president and the media routinely spar over whether such projects constitute “new” wall.

“Much of the Wall being built at the Southern border is a complete demolition and rebuilding of old and worthless barriers,” Trump wrote. “Problem is, the Haters say that is not a new wall, but rather a renovation.”

Much of the Wall being built at the Southern Border is a complete demolition and rebuilding of old and worthless barriers with a brand new Wall and footings. Problem is, the Haters say that is not a new Wall, but rather a renovation. Wrong, and we must build where most needed….

Also, tremendous work is being done on pure renovation – fixing existing Walls that are in bad condition and ineffective, and bringing them to a very high standard!

According to CBP, 300 miles of the existing so-called “wall” on the border are actually vehicle barriers. The barriers are incapable of stopping foot traffic to any reasonable degree, thus the administration believes erecting bollard fencing in those areas should be considered “new” construction. 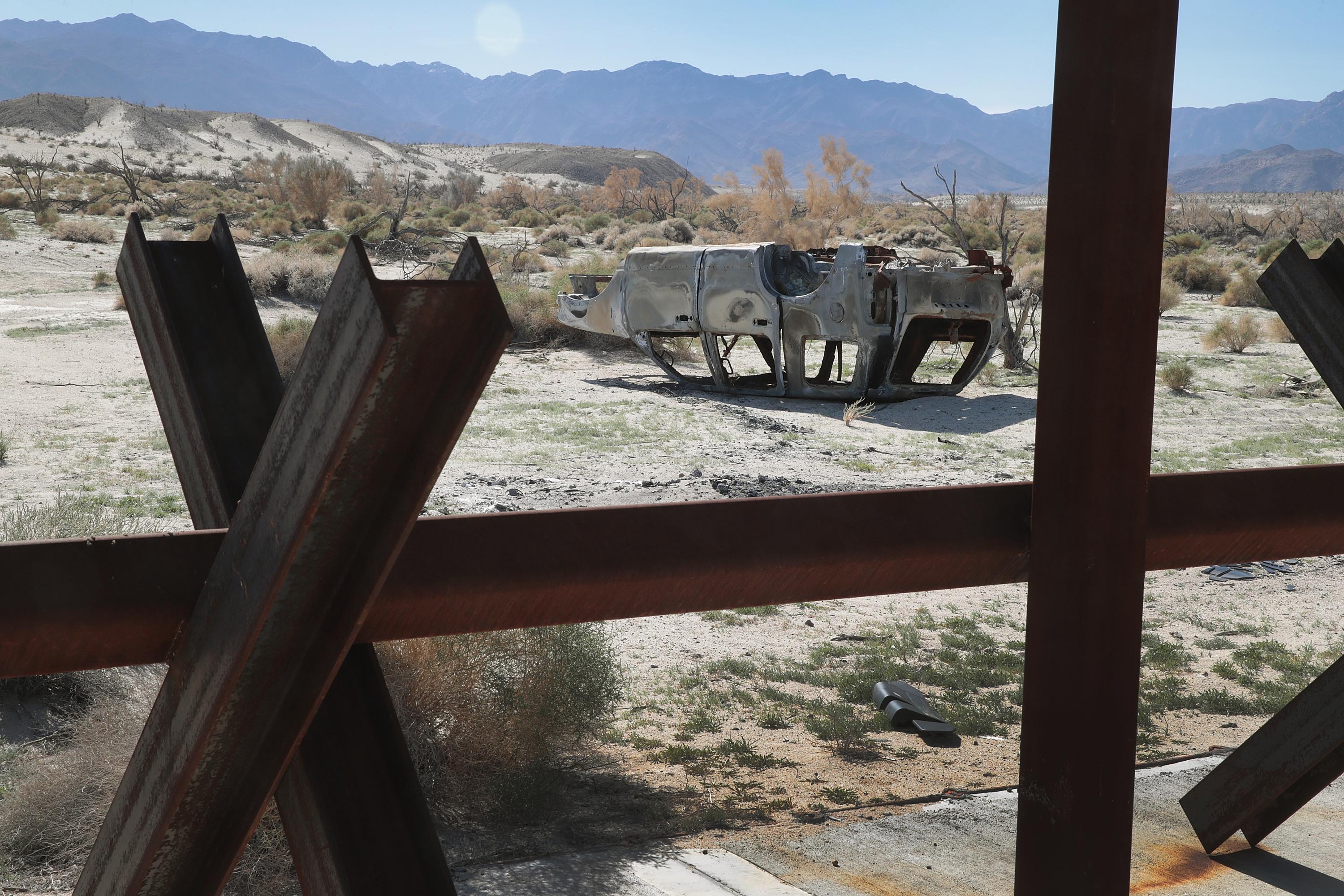 CALEXICO, CALIFORNIA – JANUARY 26: The remains of a vehicle rest on the ground near a barrier which runs along the border of the United States and Mexico on January 26, 2019 near Calexico, California. (Photo by Scott Olson/Getty Images)

“We’re still on track to get close to 500 miles built by the end of the year. The Army Corps of Engineers working with DHS and DOD are putting a tremendous amount of effort into not just building a new wall, but taking down some of the barriers that have existed that are completely ineffective, and putting in the very effective border wall they have been putting in the last couple months,” Sanders said.