Former President Barack Obama is reportedly trying to beat out Michelle Obama’s best-selling memoir, according to a Thursday report from The Atlantic.

Obama’s third memoir, which remains untitled, is set to cover everything from his 2004 Democratic National Convention speech through his two terms in office. His book will have to go up against the former first lady’s recently published best-selling “Becoming.” (RELATED: Michelle Obama Describes Feelings About Trump Inauguration: ‘Bye Felicia’)

The writing has been going more slowly than he’d expected, and according to several people who have spoken with him, the 44th president is feeling competitive with his wife, whose own book, Becoming, was the biggest release of 2018 and is on track to be the best-selling memoir in history. Speaking on the condition of anonymity, like others in this story, these sources note he’ll occasionally point out in conversation that he’s writing this book himself, while Michelle used a ghostwriter. 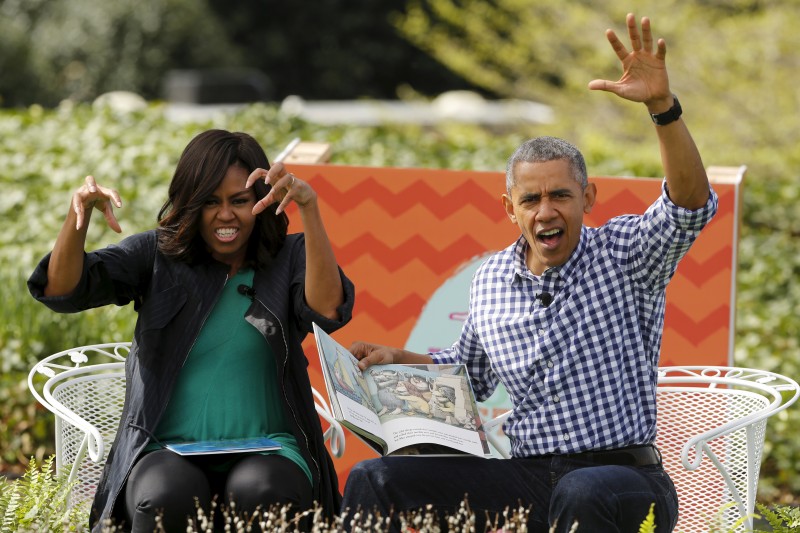 First lady Michelle Obama and President Obama act out scenes from the children’s book ‘Where the Wild Things Are’ as they preside over the annual Easter Egg Roll at the White House in Washington March 28, 2016. REUTERS/Jonathan Ernst

“Becoming” was the most sold book in 2018, despite having been released in November, according to USA Today. The Wall Street Journal reported at the end of March that her book was on the verge of surpassing 10 million copies sold.

Obama’s book publisher Penguin Random House now does not expect his book to be released this year, making the possibility of its impact on the 2020 presidential election more likely.