President Trump is reportedly considering pardoning Nick Slatten, a former Blackwater guard who was accused of firing the shots that prompted the 2007 Nisour Square massacre in Baghdad, Iraq. Slatten was convicted of first degree murder in December for his involvement in the shooting, which left 17 unarmed Iraqis dead, and 20 others wounded.

Many hailed the conviction as justice for the innocent Iraqis who were slaughtered, and affirmed the larger message it sent to Blackwater, a private security contractor that has a reputation for operating with impunity because of its relationship with the State Department, and other U.S. actors abroad — the country won’t tolerate war crimes by its own. Blackwater has since been sold and renamed. And no doubt it’s the right message.

But was a first degree murder charge for Slatten, a decorated combat veteran, the right vehicle? That’s the question Trump’s team will have to address if the president is serious about issuing a pardon. (RELATED: Trump Might Be Preparing Memorial Day Pardons)

The Daily Caller reviewed a letter to the White House from Slatten’s lawyers, who are pleading his case on a pro-bono basis, as well as some of the exhibits presented to the court in the course of Slatten’s decade-long legal battle. The case is perhaps the most controversial of those Trump is considering (“Trump Is Using His Pardon Power To Reward Violence And Cruelty” is just one of the headlines preempting his potential announcement), and a healthy dose of skepticism in terms of questioning the verdict is certainly warranted. But the striking circumstances and evidence in this case make it worth a closer look.

Slatten, a former Army sniper, and four other members of the Blackwater security team were originally charged with manslaughter in 2008 for the death of the driver of a white Kia that started the massacre. Those charges were dismissed by a district court on the grounds that prosecutors had violated their Fifth Amendment rights in building the case.

About four years later they charged the other four with manslaughter again, but missed a deadline to bring the same charge against Slatten. The prosecution responded by charging him with first degree murder, a charge that has no time limit and a mandatory life sentence. He was found guilty, but an appeals court later tossed the verdict because of improper trial proceedings related to the testimony of another member of the team, Paul Slough, that was not admitted. 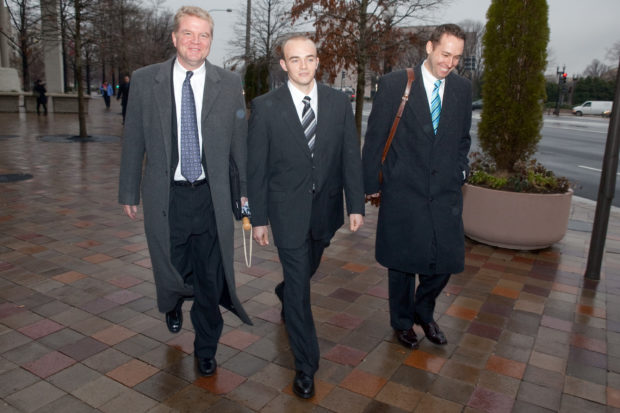 Slatten was then tried a second time for first degree murder in the summer of 2018. That trial resulted in a hung jury. Prosecutors tried him a third time on the charge and returned a conviction by the jury.

The lawyers who argued his case say he was set up as the fall guy by a prosecution gunning for a meaningful conviction in light of Vice President Joe Biden’s promise to Iraq in 2010 that Americans would be held accountable for the massacre. They say he didn’t take the first shot, he didn’t premeditate murder and he doesn’t deserve to sit in prison the rest of his life in service to a political agenda for a country feeling remorse about going to war. They may have a point. (RELATED: Blackwater Founder Erik Prince On Why Private Militaries Are The Future)

Slatten may not be innocent. Perhaps none of the Americans on the security team that day are innocent. The massacre marked a low point in the Iraq War. It was a bad time for relations with the country. The War was bad, the country felt bad. He and his buddies may have been bad actors. But the question of whether he deserves to sit in prison the rest of his life isn’t about all that. The question at the heart of his case is whether he fired a premeditated first shot that killed the driver of the white Kia.

“Objectively speaking, it’s controversial that the government would pursue a first degree murder charge in an instance like this,” Gary DiBianco, a criminal defense attorney in Washington, D.C., told the Caller. “First degree murder has to be intentional and premeditated, and there’s no dispute that these guys are in Baghdad in the middle of a war working as security officers, and they’re called out on a day where there has been a car bomb.” He also noted it is unusual for a government prosecutor to escalate the charge to get around a statute of limitations. “When they indict a case, they’re supposed to indict the most severe charge that they think they can bring,” he said.

The prosecution’s version of events was that Slatten shot and killed the driver of the white Kia without provocation or just cause as the car was sitting in traffic by a blockade set up by the Blackwater team to secure a route for a convoy of U.S. diplomats. The diplomats were being escorted back to the Green Zone in response to the car bombing. Slatten fired first, they argued, and then the slaughter ensued. Investigators never found evidence of a car bomb or insurgents on the scene.

Slatten’s defense, on the other hand, argued that Paul Slough, the turret gunner in his armored vehicle, fired the first shot because the Kia was approaching the convoy, and that all of them believed they were under attack by a car bomb. A State Department briefing earlier that day had warned them to be on the lookout for a white Kia.

Much of the evidence on both sides is arguable, but a key point to Slatten’s defense is that Slough confessed four different times to State Department investigators that he killed the driver. His testimony was not admitted in the initial murder trial, because Slough was then a codefendant. Slatten’s lawyers moved to sever his trial from that of Slough and two other members of the team so the jury could see this evidence, and that move eventually got the appeals judge to reverse his conviction.

Slough’s testimony was admitted in the final trial, but the prosecution successfully attacked his credibility as a witness, and apparently persuaded the jury to disbelieve his accounts. Slough has never recanted his testimony that he is responsible for the death of the driver.

The defense also argued that Slough’s testimony is corroborated by ballistics evidence, which they said confirms Slough and others fired at the vehicle, but does not tie Slatten to the vehicle in any way. The prosecution said that’s because most of the evidence was destroyed when one of the guards tossed a grenade at the car. 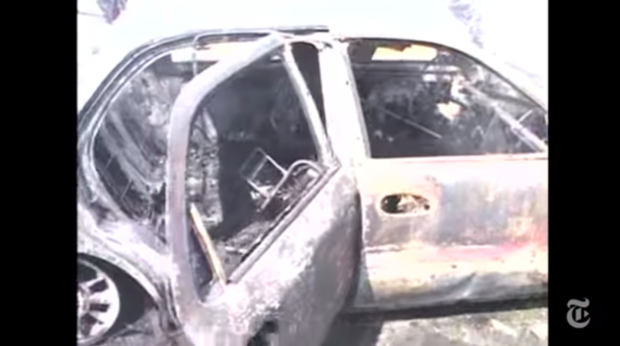 Prosecutors also seized on other parts of Slough’s testimony deemed to be false, in order to discredit his confessions. A State Department investigator who interviewed Slough concluded he lied about the whole thing, according to the prosecution. But the defense said he actually concluded Slough did kill the driver, but lied about other aspects of the shooting in order to justify himself. A redacted version of the investigator’s report seems to back up the defense on this point.

The prosecution also relied heavily on testimony from two other members of the team to dispute Slough’s account. The first was Jimmy Watson, the team leader, who testified six years after the incident that he heard Slatten fire first. But the defense says they learned in 2018 he was under the influence of narcotics and suffering from Post-Traumatic Stress Disorder when he gave that testimony, and that he has since questioned its veracity.

The second was Matthew Murphy, the turret gunner in a vehicle next to Slatten’s, who testified in 2007 that the strange sound of the first shots he heard fired meant it must have been Slatten because of his position inside the vehicle. Slatten was firing through a small opening in the side, and Murphy reasoned this could have distorted the sound. But the defense says he later changed his theory in testimony in the second and third murder trials to suggest Slatten was using a silencer, and that they were precluded from letting the jury know he had changed the explanation for the strangeness of the sound.

Slatten’s position was another key point for the defense. They argued there’s no way he could have fired the shot that killed the driver based on the angle he was operating from and the possible positions of the car when the first shot was fired.

Points like the last are difficult to weigh in on without fully reviewing the evidence, and obviously the jury’s decision was based on the entirety of the evidence and back and forth during the entire trial. But the points made by the defense and the questions they raise do cast doubt on the verdict.

The evidence put forth by the prosecution that Slatten fired the first shot is based heavily on two people who did not see, but say they heard him fire. There seem to be legitimate problems with both of them as witnesses. In spite of their successful discrediting of Slough’s testimony in the eyes of the jury, the fact remains that he has confessed four times to killing the driver, while Slatten maintains he did not, and apparently cannot be tied by physical evidence or eyewitness testimony to his death.

Then there’s the question of premeditation. The prosecution relied heavily for this point on accounts that Slatten hated Iraqis and wanted revenge for the September 11 terror attacks (he joined the Army shortly after the attacks and served two tours in Iraq before he was honorably discharged). They also relied on their assessment that the situation Slatten was in was not manifestly dangerous, since the car was just sitting in traffic. There is evidence, however, according to the defense, that other members of the team expressed similar sentiments about Iraqis (including Slough) and while there is no evidence in retrospect that the Blackwater team was under attack, the fact remains that they were operating in the Red Zone immediately after a car bomb attack in another part of the city.

“Most people, looking at that war zone, that [evidence] doesn’t get you to the idea that this person left his barracks that morning to get into a car, and decided that he was going to take a premeditated shot at someone,” DiBianco told the Caller. “Even if there wasn’t an active firefight at the moment, it’s clearly a dangerous situation.”

Again, the key question in Slatten’s case isn’t whether he is totally innocent or what his general feelings are toward Iraqis — he very well may have hated them at the time. The question is, did the prosecution prove beyond a reasonable doubt that he fired the first shot at the driver of the white Kia in a premeditated act of murder.

One member of the jury that convicted Slatten was troubled by the severity of the charge, and mandatory life sentence, according to The Washington Post. The jury foreperson said the jury was convinced Slatten murdered the driver and that none of the killings were in self-defense or otherwise justified, but the foreperson “was unsure whether Slatten truly premeditated the shooting,” according to the report.

“I think the murder one, I understand it, but there’s a bit of unjustness to it,” the unnamed juror said.

The other three members of the team, including Slough, who were charged with Slatten in the first murder trial, were convicted of manslaughter charges and of using a machine gun to commit a violent crime. The judge that tossed out Slatten’s verdict also ruled their sentencing was cruel and unusual, because the machine gun charge carried a mandatory 30-year sentence. The judge ordered a resentencing for them, which has not yet taken place.

A fourth member of the team, Jeremy Ridgeway, pleaded guilty to manslaughter early in a plea deal with prosecutors. He was sentenced to less than a year in a minimum security prison.