Transportation Secretary Elaine Chao is under fire for reportedly retaining shares in a construction materials company following a Tuesday story in The Wall Street Journal based on federal disclosure forms.

A January 2017 ethics agreement prior to Chao’s confirmation said she would take a “cash payout” in April 2018 for her shares in Vulcan Materials Co. Chao was paid in shares now worth roughly $400,000 as deferred compensation for serving on Vulcan’s board prior to her confirmation, reported WSJ. The DOT’s head ethics official said her ownership of the shares is not a conflict of interest, a DOT spokesman said.

Although WSJ claimed she had “pledged to divest,” Chao’s 2017 ethics agreement did not explicitly dictate that she divest from Vulcan. A DOT spokesman said the agreement is flawed because it did not take into account how Vulcan policy dictates directors receive deferred share units, according to The WSJ. (RELATED: Trump Echoes Left-Wing Criticism With Latest Attack On Joe Biden)

“In her ethics agreement, the Secretary agreed to resign from her Board position and not participate in matters with a direct and predictable impact on Vulcan Materials, which she has followed,” a DOT spokesman told The Daily Caller News Foundation in an email. 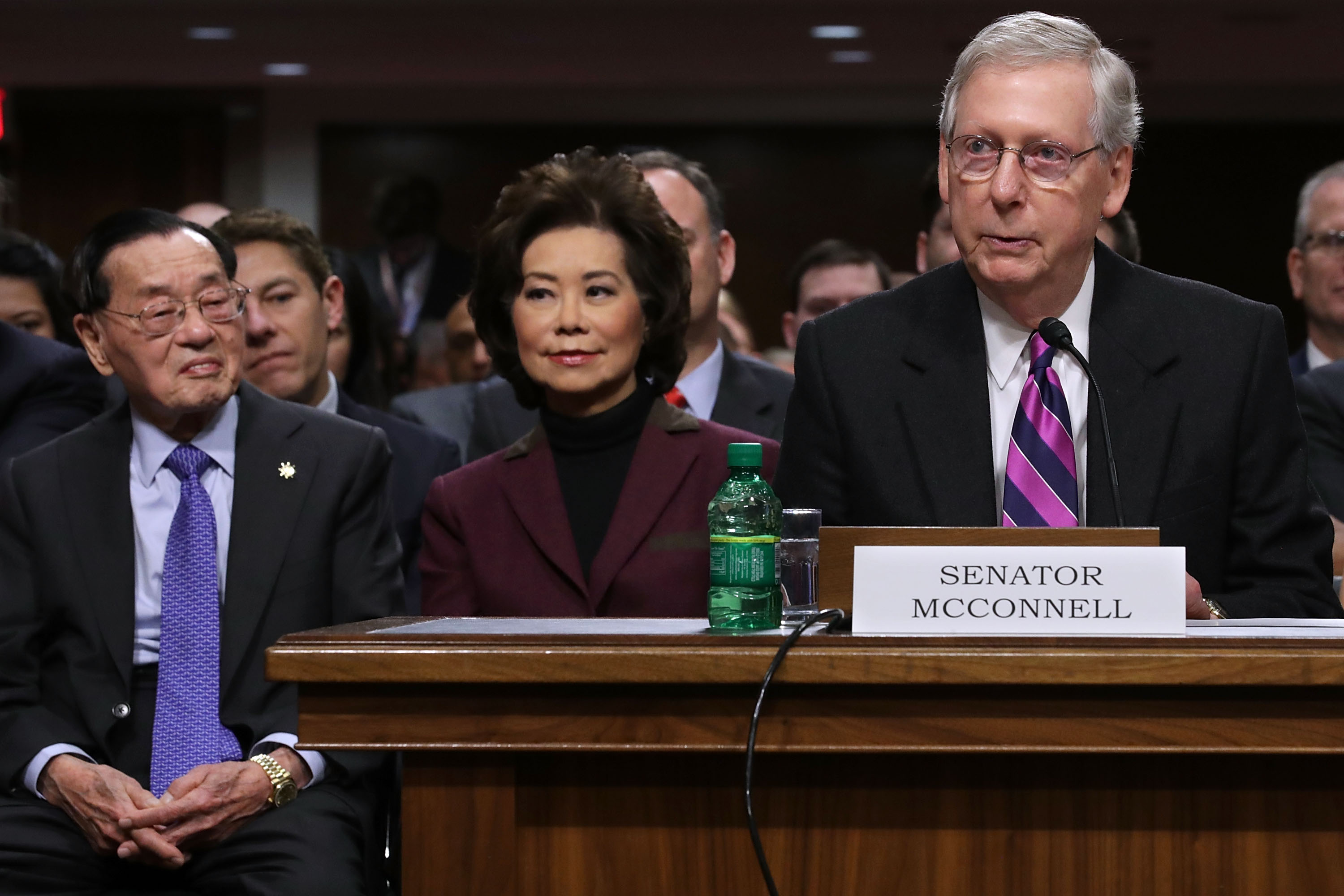 Senate Majority Leader Mitch McConnell (R) testifies before the Senate Commerce, Science and Transportation Committee on behalf of his wife Elaine Chao (C) during her confirmation hearing to be the next U.S. secretary of transportation as her father Dr. James Chao (L) looks on in the Dirksen Senate Office Building on Capitol Hill January 11, 2017 in Washington, DC. (Photo by Chip Somodevilla/Getty Images)

“It is unfortunate that members of the news media have attempted to substitute their opinions for the decisions of senior career ethics officials of the department, who have determined there is no conflict of interest as the Secretary remains disqualified from matters directly involving the company mentioned,” the DOT spokesman wrote.

Chao’s critics point out that her connection to Vulcan is a contrast from how other top officials have handled their affairs. The WSJ reported:

For instance, former Transportation Secretary Ray LaHood, who served under President Barack Obama, sold stakes in Caterpillar Inc. and Ford Motor Co. upon being confirmed to lead the department.

“I basically sold everything,” Mr. LaHood said. “The ethics police told me to do it, so I did it.”

Walter Shaub, former head of the Office of Government Ethics under Trump until July 2017, said owning shares in Vulcan was not inherently a legal conflict of interest, according to WSJ. But he added that retaining the shares is “not sending a message to employees of DOT that she is making ethics a priority.”

Vulcan is the biggest seller of road-paving and building materials including crushed stone, sand and gravel in the U.S. About 50 percent of Vulcan’s shipments are for government-funded projects, although the sales are usually made to contractors, reported The WSJ. Shares have risen more than 10 percent since April 2018, which translated to a gain of roughly $40,000 for Chao, according to corporate and government filings cited by The WSJ.

A Vulcan spokesman told The WSJ that company lawyers cited unfavorable tax laws when they recommended against accelerating distribution of shares to Chao so she could sell them off once confirmed as secretary.

Chao is worth nearly $30 million, according to Business Insider in January. WSJ’s story comes as President Donald Trump turns his attention to infrastructure after touting it on the campaign trail.

Critics on the left went after Chao Tuesday, including by calling the GOP “one big racket.”

If you ever wonder why Mitch McConnell so willingly enables everything Trump does look no further than Trump helping his wife Elaine Chao get her grift on. The GOP is one big racket. https://t.co/BAqA7grrQ4

Interesting news on Elaine Chao & Mitch McConnell. Also, don’t forget Mitch McConnell removed sanctions against Deripaska who then turned around and invested hundreds of millions into a Kentucky “aluminum” operation. Chao & McConnell are compromised and so is this country. https://t.co/rqlbqigVMy

Vulcan did not respond to The Daily Caller News Foundation’s request for comment at the time of publication.