Swalwell acknowledged during a Monday interview with Vice News that, as a white man, he should promote the voices of minorities.

“Let me take a big turn here and get your thoughts on one of the many, many candidates who’s running for the Democratic presidential nomination: Eric Swalwell, who is, you know, sort of bemoaning the fact that he is ‘another white guy’ as he puts it,” MacCallum said. “He says, ‘I may be another white guy, but I know there are gaps in my knowledge or in my experience and I know when to pass the mic.’ What do you think about that?”

“Well, Eric’s clearly riding a wave. I think he’s all the way up to zero in the polling,” Gowdy began. “I noticed throughout his political history he ran against two women that I know of, so if he is concerned there aren’t enough voices in Congress or in the city council he was on, he didn’t have any qualms about running against two qualified women back then. This is what I know and, luckily, what most of our fellow citizens know.” 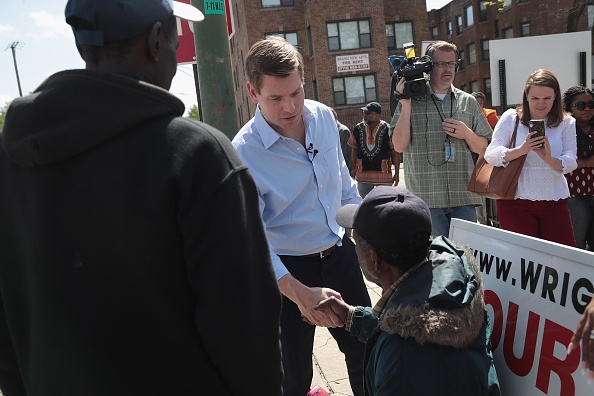 CHICAGO, ILLINOIS – MAY 22: Democratic presidential candidate Congressman Eric Swalwell (D-CA) greets residents during a brief walking tour of the city’s southside before meeting with community activists to discuss ways to end gun violence on May 22, 2019 in Chicago, Illinois. (Photo by Scott Olson/Getty Images)

He continued, “Logic, objective truth, passion, empathy, no racial or gender strictures. If you are a good person, I want you governing me regardless of any other immutable characteristic. I think it is a sad reflection on our politics if people are actually apologizing for things over which they have absolutely no control at all and I think most of my fellow citizens reject that and see this as just Eric pandering, trying to climb all the way up to one percent in the polling.”

I may be “another white guy,” but I know where there are gaps in my knowledge or my experience and I know when to pass the mic. pic.twitter.com/jMYBwF97xY

Swalwell said in the interview, “A white guy who doesn’t see other identities or understand other experiences should not be president.” (RELATED: Swalwell Tweets About His Late-Night Peanut Butter Habit)

“I do,” Swalwell continued. “And where there would be gaps in my knowledge or my experience, I will pass the mic to people who do have that experience.”

The most recent Morning Consult poll, collected from May 13 to May 19, 2019, revealed that Swalwell received less than one percent. The poll interviewed 15,342 registered voters.