WATCH: Philadelphia Police Rip Man Off Of Bus For Not Wearing A Mask

‘You Will Win Easily’: Trump Jokes About Asking Fauci To Run Against Rep. Alexandria Ocasio-Cortez

Here’s A List Of Some Of The Most Unusual Animals, Reptiles Available At A Typical Wuhan Wet Market
Shotgun Life Contributor
May 29, 2019 3:43 PM ET
Font Size:

If you ever shot a Krieghoff K-20 Parcours you might walk away thinking that this 20-gauge over/under is the best handling shotgun, period. That could be attributed to the Parcours approach that pairs barrels lighter than the standard model with the low-profile K-20 action. For ladies, the K-20 Parcours now gets even better with the new purpose-designed Krieghoff K-20 Victoria.

As Krieghoff’s first shotgun for women, the German company shaped a stock that has a shorter length of pull, adjustable comb, and anatomically friendly pitch and palm swell. Up front there’s a slender, field-style forend that enhances control in the smaller hands of a woman.

Krieghoff’s approach is not much different from other brands of women’s sporting guns except for the distinction that the Victoria is built around the impeccable K-20 Parcours. And at a starting price of $12,395 with the standard scroll engraving the K-20 Victoria doesn’t impose a price penalty over its sibling K-20 Parcours. 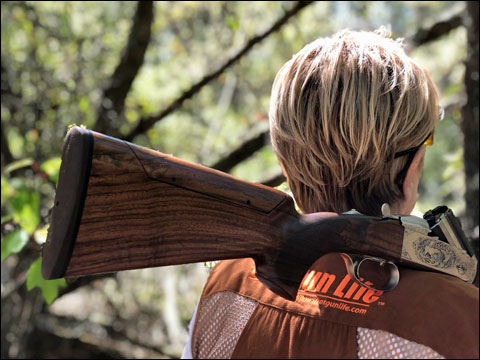 The Krieghoff K-20 Victoria stock with its adjustable comb is comprehensively shaped for the female anatomy compared with standard off-the-shotguns.

On the model that I shot the 20-gauge, nickel-plated steel receiver showcased Krieghoff’s deep-chiseled Parcours Special engraving (pointer and pheasant on one side and lab retriever and duck on the other). The higher grade Turkish walnut was finished with the K-20 Victoria fleur-de-lis flourishes on the checkering borders. Those options raised the price to $18,995 (and drew the admiration of my female clays-shooting friends). 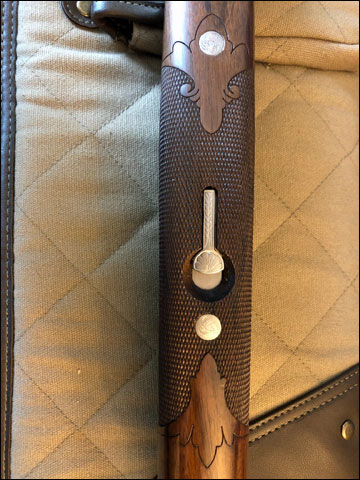 The fleur-de-lis flourishes on the checkering borders are unique at Krieghoff to its K-20 Victoria.

Krieghoff clearly knows female shotgunners because the K-20 Victoria arrived in a specially designed tan and cream-colored leather case. I wish I had a matched set of luggage that went with the K-20 Victoria case – or a pair of shoes. It was beautiful.

Krieghoff says it worked with women of varying shooting experience, including members of its own staff, to collect feedback, insights and specifications in their pursuit of designing an adjustable-comb stock that fits comfortably and points instinctively right out of the case.

Bear in mind that of the seven-member Krieghoff Olympic Pro Staff Shooters, five are female. Each of them has compiled an enviable list of career accomplishments. 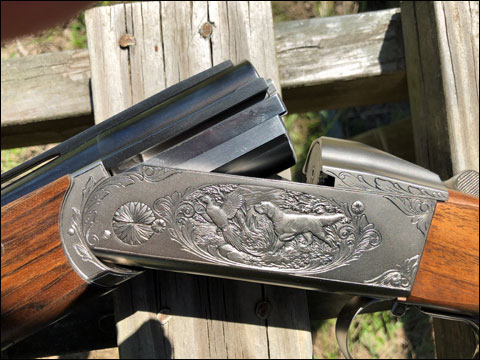 The Parcours Special engraving on the Krieghoff K-20 Victoria.

Still, Krieghoff is a latecomer to the women’s shotgun marketplace. Arriving squarely in the premium category, Krieghoff is playing catch-up to the likes of Perazzi, Blaser and Beretta. Although deluxe brands like Blaser and Beretta use their less expensive actions for ladies’ over/unders, the Krieghoff K-20 Parcours is merely a scaled-down version of the flagship K-80. Aside from the rarified Essencia upland gun, there is only one shotgun action at Krieghoff – the difference simply proportional to their 12-gauge and 20-gauge frames.

The Krieghoff K-20 Victoria and K-20 Parcours are in fact mechanically identical.

Specifications of the K-20 Victoria are: 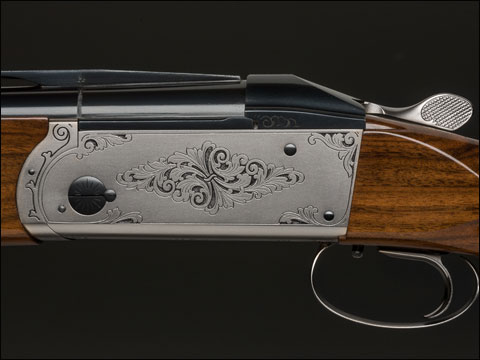 Krieghoff’s design DNA underlying the 12-gauge, K-80 bullet-proof durability actually delivers a surprise payoff for the K-20 Victoria. The K-80 and K-20 use a top hood latch that slides forward from the receiver onto the barrels for a tight lock-up. Because the hood replaces the all-too-familiar underlug, bosses, monbloc bites and crossbolts, Krieghoff’s K-20 action is narrower and lower than most others – making the K-20 Victoria’s receiver a natural for women.

Likewise for the K-80 and K-20 mechanical trigger. Ladies who are sensitive to felt recoil may try soft loads. If a women’s shotgun has the typical inertia trigger, these low-impact shells may not provide sufficient oomph to set the second shot. Since a mechanical trigger doesn’t care about that, expect gentler loads to fire consistently with the Krieghoff K-20 Victoria.

When it comes to the K-20, Krieghoff has touted the gun as a universal wing and clays frontrunner. With that in mind, I took the Krieghoff K-20 Victoria into the field for sporting clays and bobwhite quail to understand first-hand how it performed.

I started at Southwind Sporting Clays in Quitman, Georgia.

Krieghoff’s K-20 Victoria was a delight to open and close – unlike many new break-opens that require a gym membership for that simple task. This is important to female shooters, and the Victoria sets a benchmark. Shotgun makers take note: we hate it when a gun is difficult to operate. It’s rare when you try a new gun that works right off the bat. At the first station I knew I needed this gun. 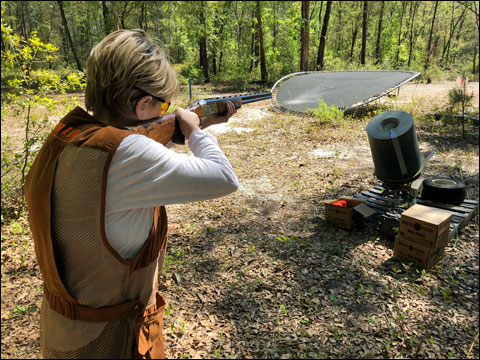 Shooting the trampoline station at Southwind Sporting Clays attested to the nimble handling of the Krieghoff K-20 Victoria.

After shooting several stations with the 30-inch barrel version it became immediately apparent, through solid target hits, that I didn’t have to make any adjustments (including the moveable trigger position); the shotgun fit me right out of the box. 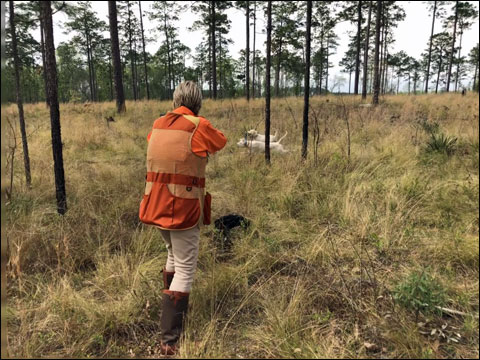 I booked an afternoon hunt. For starters, there was a family-style lunch of chicken, green beans, potatoes, black-eyed peas, dinner rolls, sweet tea and a big chocolate-chip cookie for dessert. Afterwards, we lounged on rocking chairs in the cool afternoon shade until the Jeep-drawn bird buggies arrived at the formal plantation house.

Guide Noah Fouche drove deep into the hunting fields. As we followed his cockers, setters and pointers the Krieghoff K-20 Victoria was easier to carry than I had expected for a seven-pound bird gun. I chalked that up to its inherent balance. 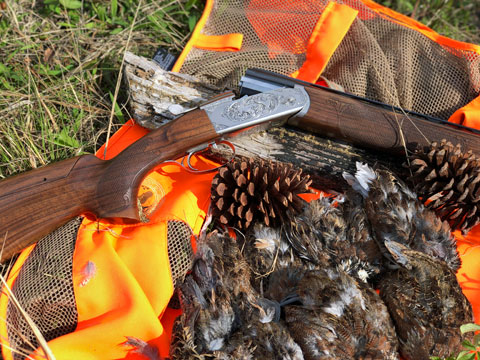 Some of the quail taken by the Krieghoff K-20 Victoria at Southern Woods Plantation.

It wasn’t long before a 25-yard shot brought down a quail and shortly after I made a double with the easy-swinging shotgun. In retrospect, I realized that the palm swell provided supplemental handling. A true women’s shotgun will include a small-radius grip, but even that may not provide sufficient control. Bird-gun purists may pooh-pooh the palm swell as strictly a clays-shooting fixture, but on some of those wide, sweeping swings at Southern Woods Plantation it provided a beefier grip that goes under-appreciated in women’s field guns. 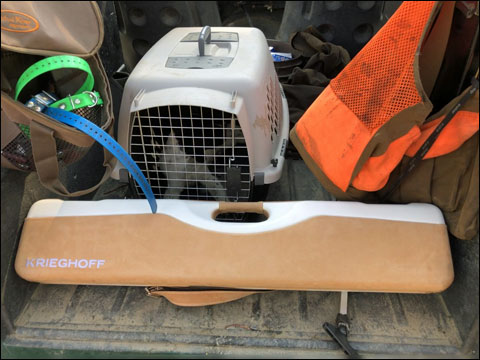 The Southern Woods Plantation hunt highlighted the intuitive nature of the Krieghoff K-20 Victoria on those fast-moving birds through the fusion of balance, pointability and trigger performance.

At $12,395 the Krieghoff K-20 Victoria is priced out of reach for many women. However, maybe it’s not. My journey into the shotgun sports, like other women, started with an inexpensive over/under and during the ensuing years the shotguns I owned got progressively better to meet my growing expectations and improving skillset. If I had it to do over again, I would’ve bought something like the Krieghoff K-20 Victoria from the outset, saved myself thousands of dollars over the years, and owned a long-time shooting companion of enduring quality and beauty.

Deborah McKown is the Editor of Shotgun Life and an NSCA Level I instructor. You can reach her at contact@shotgunlife.com. She is founder of the Red Hills Region chapter of the national Girls Really Into Shooting − fondly called the G.R.I.T.S. Founded by Elizabeth Lanier, the G.R.I.T.S. have been featured in national magazines. The Red Hills G.R.I.T.S. plants a flag in America’s bobwhite quail hunting capitol of Thomasville, Georgia. Visit the new G.R.I.T.S. Red Hills Region Facebook page for information and updates at https://www.facebook.com/redhillsgrits.

1
WATCH: Philadelphia Police Rip Man Off Of Bus For Not Wearing A Mask
US
2
WaPo Reporter Found Dead In Apartment
Media
3
Mystery Footnotes From FISA Report Set For Declassification
US
4
EPSTEIN: It's Time For Some Clear Thinking About The Virus
Opinion
5
'How About No': Congressman Rips Fauci's 'Papers, Please' Proposal
Politics