The following is an excerpt from “After the Flight 93 Election,” out now from Encounter Books.

This suppression of speech and thought is the second-most sinister feature of modern leftism. If we are to overcome it, we must understand its roots.

The first and most obvious is that, because “social justice” rests on a fallacy, it must suppress awareness of that fallacy. The leftist enterprise has staked its success on an absurd and obviously false account of inequality, viz., that all inequality is the result of injustice or oppression. There are only two ways to maintain public support for a proposition that is obviously false: compound the lies, or suppress and punish dissent. Indeed, the two go together because the more the lies pile up, the more dissent must be suppressed. (RELATED: Tucker Carlson Segment Will Teach You All You Need To Know On Birthright Citizenship)

Since evidence for widespread present injustice is, to say the least, not altogether obvious, social justice warriors must insist that a great deal of present disadvantage is caused by past injustice. Since this assertion is undermined by many observable facts and by logic, it is not readily accepted by most of those held to be advantaged. Questions that inevitably arise include: Have we really disproved all possible explanations for disadvantage besides oppression? Are we absolutely certain that environmental, cultural, or personal factors play no role whatsoever? To the extent that such factors do not arise from one group of humans oppressing another, how can their effects be rightly called unjust?

What reason do we have to believe that politics is even capable of eliminating inequalities that do not arise from oppression? What about the opportunity costs and waste that inevitably flow from attempts to accomplish the impossible? How much of today’s disadvantage or inequality is truly attributable to injustices committed decades or even centuries ago? How can a person who has committed no injustice himself be responsible for the injustice of others? Even if one were to accept the concept of hereditary guilt, how can persons with no hereditary connection to past oppressors be responsible for their misdeeds? 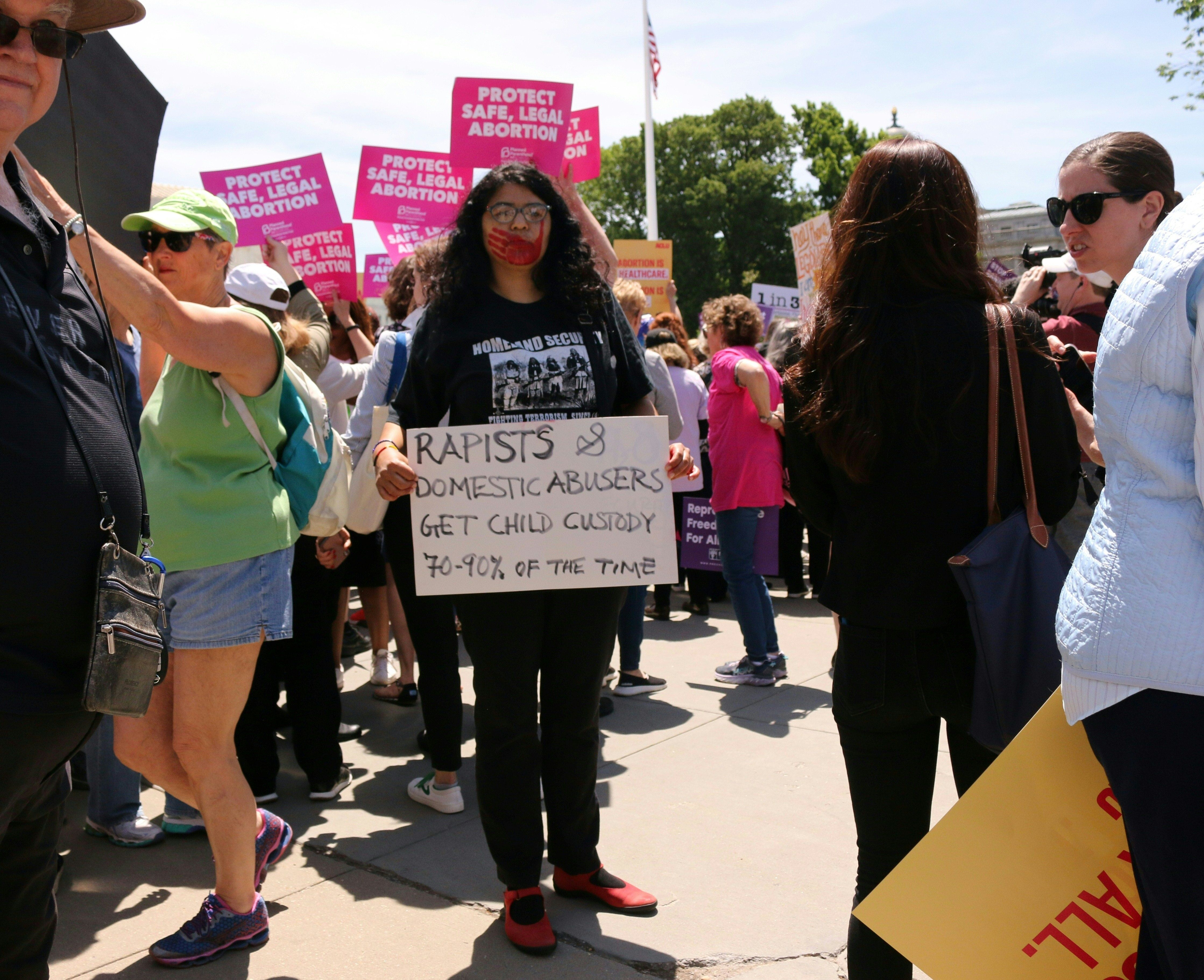 Sophie Marjanovic poses for a photo as abortion rights activists rally in front of the US Supreme Court in Washington, DC, on May 21, 2019. – Demonstrations were planned across the US on Tuesday in defense of abortion rights, which activists see as increasingly under attack. The “Day of Action” rallies come after the state of Alabama passed the country’s most restrictive abortion ban, prohibiting the procedure in all cases, even rape and incest, unless the mother’s life is at risk. Alabama is among about 14 states which have adopted laws banning or drastically restricting access to abortion, according to activists. (Photo by AFP/Getty Images)

These lines of inquiry more than suggest that redistribution and other efforts to correct all disadvantage are unjustified and counterproductive. Therefore, social justice warriors insist that these lines of inquiry be disallowed, along with any arguments that undermine public support for any element of their project. Such arguments are to be denounced when stated and their advocates punished to discourage further heresy. Here is the leftist saint Herbert Marcuse on the necessity of “repressive tolerance”:

the withdrawal of toleration of speech and assembly from groups and movements which promote aggressive policies, armament, chauvinism, discrimination on the grounds of race and religion, or which oppose the extension of public services, social security, medical care, etc. Moreover, the restoration of freedom of thought may necessitate new and rigid restrictions on teachings and practices in the educational institutions which, by their very methods and concepts, serve to enclose the mind within the established universe of discourse and behavior – thereby precluding a priori a rational evaluation of the alternatives.

Once all claims to moral authority are vested in “history” and “science,” secular persecution of heterodoxy follows almost inevitably. “History,” recall, is progress – from worse to better. Who argues against the better? “Science” deals with true facts: verifiable, established, “settled” facts – the undeniable. Who denies the undeniable? To question history or dispute the conclusions of science is therefore to raise one’s hand and proclaim “I’m insane!” One may pity the insane, but one has a duty not to allow insanity to spread, and also – to the extent possible – to correct the insane for their own good. They naturally may not always accept the correction as well-intended, but what do you expect? They’re insane! This is, not coincidentally, the same way that medieval inquisitors treated heresy.

Furthermore, to question the moral claims of “history” – to ask whether the “debt that can never be repaid” is in fact actually owed, or whether the attempt at repayment might not be worth the immense costs – is to proclaim oneself not merely insane but evil. This helps explain the Left’s increasing moralistic vindictiveness toward any questioning of its claims, and its fury at outright dissent.

Finally, the Left knows that it is in a difficult rhetorical position. The heart of its argument is that some people are inherently innocent and good while others are inherently guilty and bad and must be treated accordingly. To ears insufficiently attuned to the new understanding of justice, this can sound unjust. Tying moral worth to circumstances of birth? Not treating people equally? Punishing the living for the sins of the dead? Why all this is – contrary to appearances, logic, and common sense – “just” requires considerable explanation. To the extent that people “get it,” they will sharply divide between those who say that the “advantaged” have it coming and those who object “No, I don’t.”

The problem for the Left, therefore, is that while its message is very effective at egging on its own side, it can be equally effective at alarming and rousing its targets. The ideal solution would be to come up with a public message that rallies the Left while lulling its targets, but this turns out to be very difficult, if not impossible. (RELATED: Former Trump Admin Spox Reveals The Real Reason He Didn’t Go On CNN)

The next best thing is to forbid the targets from speaking up – with “speaking up” understood to include simply repeating the Left’s rhetoric. Thus a commonplace contretemps of our time runs according to the following script: some leftist condemns an entire demographic group, often including a wish that harm befall it; she receives loud applause from the Left and from the ambient culture; a non-leftist repeats what she said and is denounced. The denunciation ensues whether or not the non-leftist adds any critical comments. His real offense is noticing, or more precisely noticing without celebrating. It’s OK to notice if noticing takes the form of acknowledging justified anger and welcoming as deserved punishment whatever comes next. But noticing is very bad if it suggests even a hint of moral condemnation or – worse – the beginnings of organized opposition. 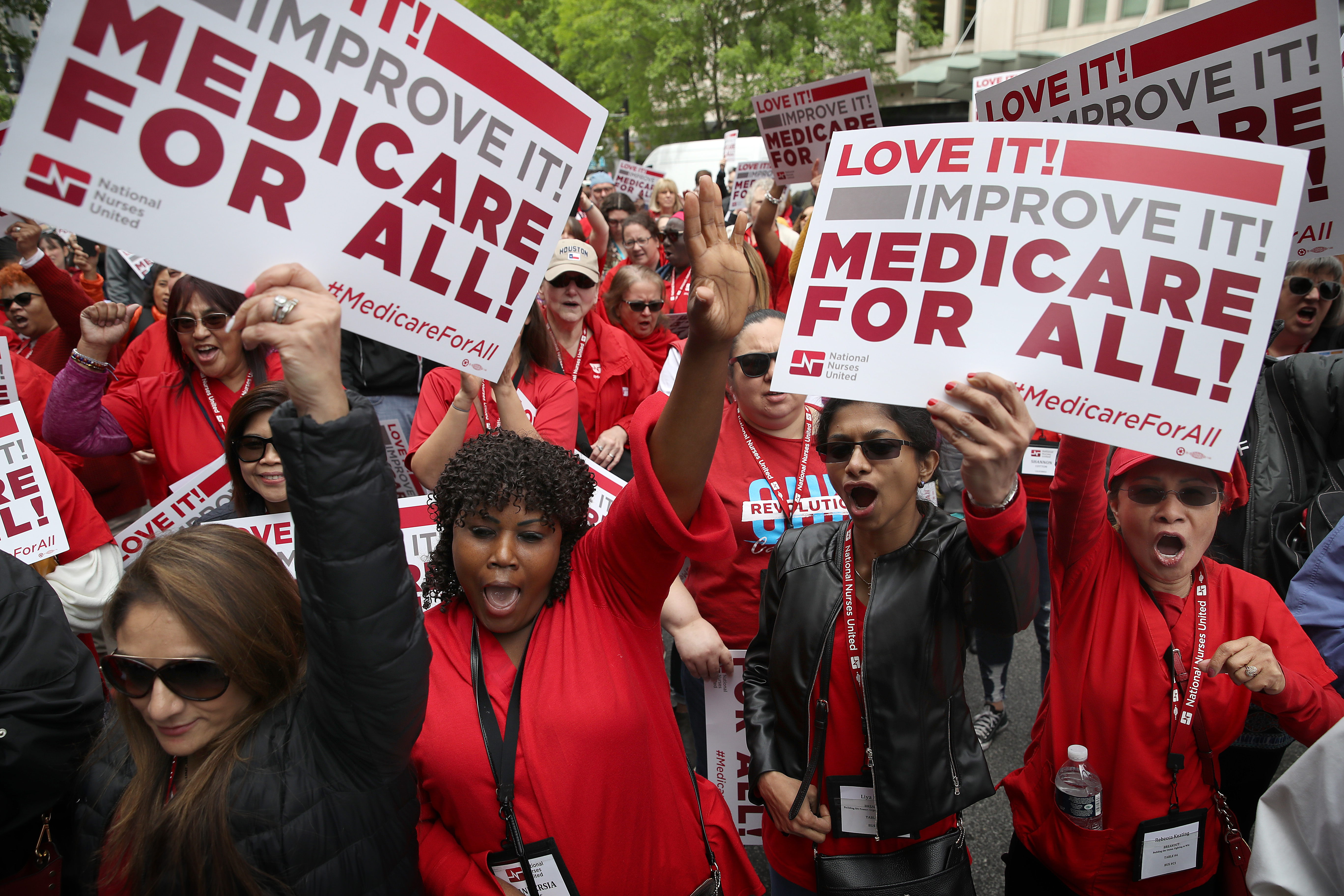 WASHINGTON, DC – APRIL 29: Protesters supporting “Medicare for All” hold a rally outside PhRMA headquarters April 29, 2019 in Washington, DC. The rally was held by the group Progressive Democrats of America. (Photo by Win McNamee/Getty Images)

We may sum up the typical response of a leftist caught red-handed thus: “You’re completely paranoid. That’s not our plan at all; and even if it were, you’d have nothing to fear. Still, the fact that you’re worried shows that you have a guilty conscience and deserve whatever it is we promise we’re not going to do to you. Your talking about what we say is evidence of your badness. Stop talking about us, lest you force us to do to you what we insist it never even occurred to us to do.”

The Left allows only three responses to its rhetoric: silence, agreement, or denial. As to this last, long experience has taught leftists that, whenever they blurt out what’s really on their mind, they can count on “conservatives” to grope for ways to excuse or provisionally understand their hate speech – nothing to worry about! harmless hyperbole! – or, that failing, to assert moral equivalence with the president’s tweets. (Meanwhile if an obscure yet genuine conservative merely says “If attacked, I will defend myself,” he is denounced – by “conservatives” at least as vociferously as by leftists – as Literally Hitler.)

It is an odd feature of the current year that calling an avowed enemy a liar – publicly insisting that her plain words could not possibly mean what they plainly say – not only fails to provoke an angry denial but is welcomed by the alleged liar herself. Anything to keep leftism’s targets somnambulant for as long as possible. The more Americans who wake up and realize that contemporary leftism is a revenge plot with themselves as its targets, the more will object and try to stop it. This is what the Left, at present, most fears and is trying to prevent.

Michael Anton is a lecturer and research fellow at Hillsdale College’s Kirby Center and a senior fellow at the Claremont Institute. He previously served as deputy assistant to President Trump.