The allure of a .50-caliber handgun is undeniable. The sheer absurdity is intriguing, the thought of that much firepower in a handheld device oddly attractive if not a bit intimidating. Fifty-caliber handguns are nothing new to the revolver world, with the .50 Action Express, .500 S&W Mag., .500 JRH and .500 Wyoming Express cartridges being available to hunters for more than a decade. The .500 Linebaugh has the deepest roots of them all, however, and now Magnum Research offers its single-action BFR (Biggest Finest Revolver) chambered for this powerhouse.

Magnum Research announced its latest foray into the .50-caliber category at this year’s SHOT show, but the .500 Linebaugh was unleashed on the general public in the August 1986 issue of Guns & Ammo magazine via an article by Ross Seyfried. Let’s just say the .500 Linebaugh BFR is fashionably late. 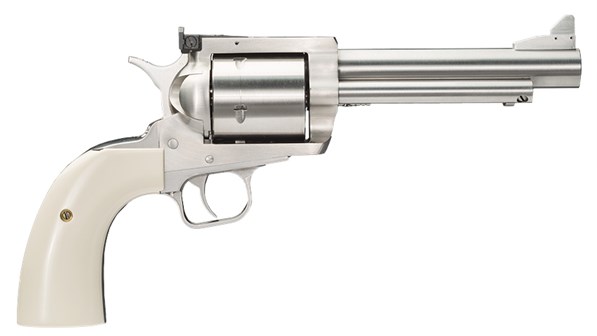 In the mid-’80s, John Linebaugh, a then little-known gun builder in Cody, Wyo., created the cartridge in his lab like a mad scientist, using a cut-down .348 Win. case as the parental unit. An earlier iteration of the cartridge existed, but its progenitors, Bill Topping and Neil Wheeler of Salt Lake City, were unable to gain any traction. Linebaugh cut the large-rimmed .348 Win. down to 1.4 inches and blew out the case to .510 bore. The .500 Linebaugh was never quite loaded to potential in the early days, and it was overshadowed by its overachieving little brother, the .475 Linebaugh.

For more than three decades, the .500 Linebaugh has been a custom proposition only, typically built on massaged Ruger full-sized, single-action revolvers that cost a premium to construct. That was until Magnum Research boldly went where no other gun manufacturer has gone before.

Built on the company’s uber-strong, 17-4 PH stainless steel short frame, the .500 Linebaugh BFR is fitted with an unfluted, counter-bored, oversized five-shot cylinder (it has to be oversized to accommodate the cartridge’s dimensions and gargantuan rim). Like all BFRs, this one has a free-wheeling pawl, which enables the cylinder to be rotated in either direction with the loading gate open. A transfer-bar safety system ensures safe carry with a full cylinder, a nice feature when in the field. All BFRs have a match-grade barrel and locking base pin. A fully adjustable rear sight by LPA adorns the topside, and the topstrap is drilled and tapped to accept a scope base that comes standard with every BFR. 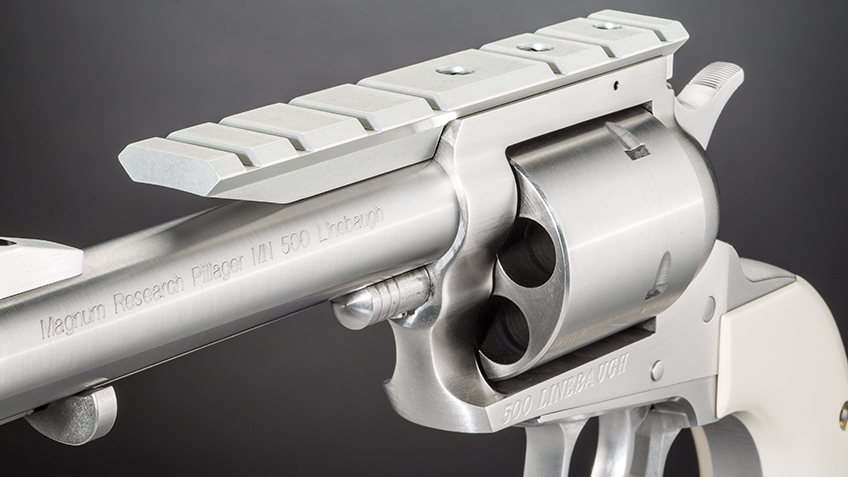 This is a big revolver. It takes up roughly the same space as a Ruger Super Blackhawk or a Freedom Arms Model 83, but it’s beefier in the areas that count. Places such as the topstrap and the lower frame area are correspondingly a bit heavier, but that extra weight dampens recoil. The BFR is a purpose-built hunting revolver that makes no excuses or compromises.

A recent addition to the option list is Magnum Research’s interpretation of the Bisley grip frame, fitted with either ivory-like polymer or black Micarta. The standard plow-handle grip is also still available, but if heavy recoil is on the menu, you would be well-served by checking off “Bisley” on your order form. It is hands-down the best out-of-the-box grip I have ever had the pleasure of using. Looks a bit like a banana, but it mitigates much of the pain associated with .50-caliber cartridges loaded warmly.

My sample BFR is equipped with a 5.5-inch barrel and the Bisley grip frame adorned with faux ivory. The trigger is crisp and breaks at a clean 2.5-pound pull weight. For testing, I mounted a 2X Leupold scope on the base, my desire being to best represent the capabilities of this revolver. (For hunting I often use a red-dot sight.)

I procured three different loads from Buffalo Bore Ammunition, the first company to ever offer ammunition for the .500 Linebaugh. The three loads consisted of a relatively light-recoiling 435-grain hardcast flat-nose load rated at 950 fps, a 350-grain jacketed-hollow-point load rated at a lofty 1550 fps and a heavyweight 525-grain hardcast load at a modest 1125 fps. 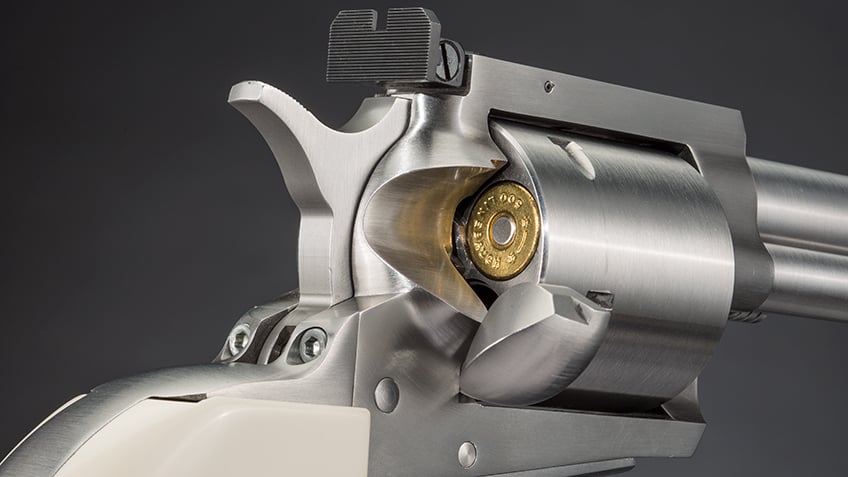 Shooting off the bench for accuracy places all of the abuse available on the shooter, and as expected the .500 Linebaugh delivered unabashedly. But it is a necessary evil, and this BFR, like all others I have spent time with, failed to disappoint as far as accuracy was concerned. I had the opportunity to run the Sportsman’s All-Weather All-Terrain Marksmanship safari course at the FTW Ranch in Barksdale, Texas, with the new BFR prototype, and I grew smitten with it. Despite its size, the revolver was easy to wield and effective on moving targets. I was also able to take a large fallow deer with Buffalo Bore’s 350-grain JHP load, and the results were decisive to say the least.

It may be hard to comprehend, but the .500 Linebaugh BFR is quite versatile. It might seem like overkill on deer-size game, but there are no degrees of dead. Loaded with lighter, expanding bullets at high velocities, it makes for great deer medicine. With monolithic solids or Kodiak Punch bullets in the chambers, I wouldn’t hesitate to hunt the largest game to walk this earth.

If handgun hunting is on your horizon, look no further than the Magnum Research BFR. The options available are staggering, and the company’s Precision Center offers custom touches that would otherwise cost a premium in the bespoke revolver world. Thirty-three years after its introduction, the .500 Linebaugh lives in a bona fide commercial configuration. It may be late to the party, but at least it showed up! 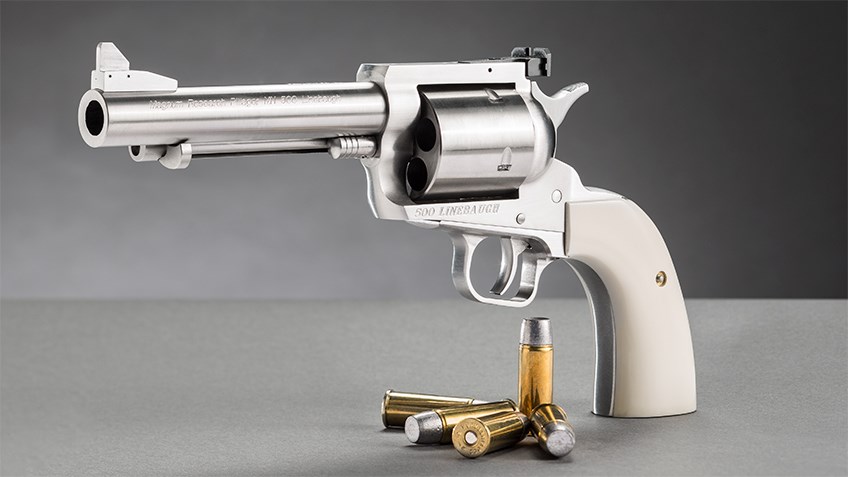 1
EXCLUSIVE: Columbia University Found Him Guilty. But He's Got Voice Recordings, And He's Not Afraid
The Mirror
2
Republican Senators Are Literally Playing With Kids’ Toys During The Impeachment Trial
Politics
3
Dad Confronts Warren On Student Loan Forgiveness: 'Can I Have My Money Back?'
Politics
4
Martha MacCallum Grills Eric Swalwell On Senate Process: 'It's Not The President's Team's Responsibility To Prove Him Innocent'
Media
5
German Authorities Find ‘Weapons Of War’ During Raid Near Radical Mosque
World