President Donald Trump confirmed a NASA scientist is being released from a Turkish prison, where he had been held on charges that he was a member of a group opposed to Turkish President Recep Tayyip Erdogan.

Speaking to reporters, Trump on Thursday referred to the scientist, Serkan Golge, as a “prisoner” and a “hostage” of Turkey, while also complimenting Erdogan over Golge’s release.

“He was great,” Trump said of Erdogan, who has led a crackdown on civil society in Turkey in the wake of a failed July 2016 coup attempt.

“They released this prisoner, hostage, whatever you want to call him. He’s at home custody in Turkey. He’ll be released fairly soon.”

Golge, who has Turkish and American citizenship, was arrested in July 2016, shortly after the failed coup. He was sentenced to seven-and-a-half years in prison in February 2018 on charges that he aided a terrorist group.

Golge was also accused of being a supporter of Fethullah Gulen, a Muslim cleric who is considered a political rival of Erdogan. Erdogan has blamed Gulen, who lives in exile in the U.S., of masterminding the coup attempt. Gulen’s network of supporters have also been labeled a terrorist group in Turkey. 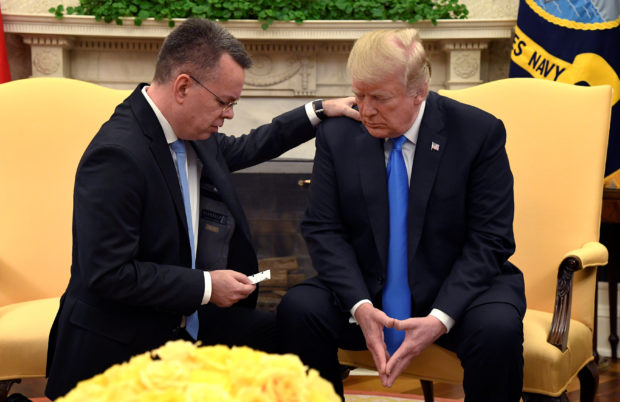 Erdogan has led a crackdown in Turkey to rid government agencies, the media and universities of Gulen sympathizers. He has also pressed the Obama and Trump administration to extradite Gulen back to Turkey, where he would likely face a death sentence.

Trump said Nov. 17, 2018, that he is not considering extraditing Gulen.

One piece of evidence reportedly used against Golge at trial was a $1 bill he had in his wallet when he was arrested. Dollar bills are considered by some to be a symbol of membership in the Gulen movement. (RELATED: NASA Scientist In Turkish Jail On Spy Allegations)

The Turkish government made similar allegations about Andrew Brunson, an American pastor who was released from prison Oct. 12, 2018, after spending nearly two years on charges that he conspired with the Gulen group.

The announcement about Golge came shortly after Trump and Erdogan spoke by phone. According to a read-out of the call, they discussed Turkey’s plan to purchase S-400 weapons defense systems from Russia. Turkey, a NATO ally, faces sanctions from the U.S. if it goes through with the deal.

It is not clear whether Trump and Erdogan discussed Golge’s release during the call, or whether a deal was struck to free the scientist.

Golge will remain under judicial control after his release, meaning he cannot leave Turkey, according to Reuters. It is unclear if he will eventually be allowed to return back to the U.S., where he has a wife and two children.