“Biden has had almost no public schedule, Sanders has done a total of *1* time taking questions from reporters rather than set interviews and speeches, Buttigieg has been praised for how he weaves around answers, etc, but Harris is the one who can’t escape being called ‘cautious.’

MOOD: “I’m pretty sure Mueller just wants to get sit on a beach somewhere at this point.”

Lefty commentator: ‘Anonymous accounts keep telling me to fuck myself’

“A crazy amount of anonymous accounts keep telling me to fuck myself, how much they hate me, and that I should do my show the way they demand. This is obviously at least partially coordinated and I already have some evidence. Any thoughts, @jack @TwitterSupport?” — Dave Rubin, host, The Rubin Report, a show on YouTube funded by his “fans.” He is a lefty political commentator.

“I am serving community service with @GeorgePapa19 and it’s not my sentencing. How many women would do that? But of course his mother in the meantime has nothing better to do than smearing me with absolute lies on twitter … I feel embarrassed for her. What an ungrateful person.”

— Simona Mangiante Papadopoulos, wife of the ex-Trump2016 presidential campaign aide, who added, “…Mental illness is draining. You can’t reason with a mentally ill person. They abuse you and they blame you for doing that.”

RUDY GIULIANI, Trump’s lawyer: “Donald Trump is the most open President ever. His press conference today is yet another example of that and a brilliant way to go past a largely hostile press and talk directly to his fellow citizens. Compare his articulate presentation to Biden, Pelosi, Mueller etc.”

ANDREW FEINBERG, White House correspondent: “It’s not a press conference. A press conference is what he held the day after the midterms. What happens on the South Lawn is contrived chaos meant to let him wander the rope line picking questions he likes while preventing home viewers from hearing the tough questions he ignores.”

“I always bring my lunch to work—obviously—but I’ve started to notice that I get a little sad when I only have one thing left. And then I save that thing so I can have it later. What does this mean? Do I have a weird relationship with food or do I just need to try packing a snack?” — Ari Kohen, political theory professor, University of Nebraska-Lincoln.

“ur fat ugly face is not a good look.”

“In case it looks like my tweets keep disappearing it’s becaues i ran my twitter account through this program that’s supposed to clean out the whole thing but instead is randomly deleting some tweets and not others.”

“@TwitterSupport I think I accidentally caused a bug in my account bc I used @TweetdeleteNet and it’s going haywire.”

Former Daily Show producer invents a name for her uterus

“Trump is a child who will always be deeply threatened by the greatness of my dads incredible life. There is a lot of criticism of how much I speak about my dad, but nine months since he passed, Trump won’t let him RIP. So I have to stand up for him. It makes my grief unbearable.”  — Meghan McCain, co-host, ABC’s The View. (RELATED: McCain Tells Klobuchar To Leave Her Father’s Legacy Alone)

‘Denise’ has a message for feminists

“Dear feminists, I’m hearing a lot about how women are equally as strong as men. If this is so, why are you not out protesting sports segregation? Shouldn’t men and women compete together?” — Denise McAllister, PJ Media, formerly, a contributor at The Federalist, attended Meghan McCain‘s wedding. (RELATED: Meghan McCain’s Ex-Friend ‘Denise’ Doesn’t Care About Being Classy)

After Norah O’Donnell took over his job, Jeff Glor is sticking around CBS news. But he’s moving to Saturday. Here.

Business Insider‘s Global EIC may want… to brush up on the basics of politics. But I feel no need to make this any worse than it already is. Here.

“The amount of work I get done between 4 am and 7 am is breathtaking. It’s hard to describe in a tweet how much clarity I have during those hours. For years I’ve tried to convince some friends to wake up early and they won’t give it a shot!” — Yashar Ali, freelancer, HuffPost, New York Mag.

“Trolls: I get that it was important for Mueller to probe Russian interference & he got a whole bunch of indictments. But what the press cared about is whether he might charge Trump, not knowing he felt he couldn’t.” — Howard Kurtz, media host, Fox News. 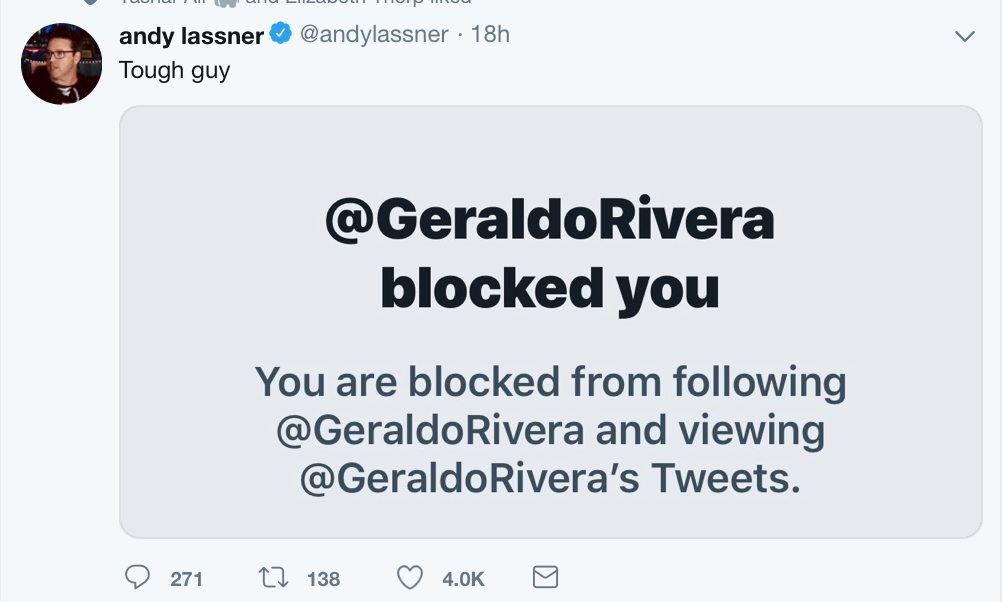