Donald Trump Jr. had a message for Meryl Streep Friday following her “toxic masculinity” comments and that was simply “#ImWithHer.”

The first son, who’s rarely shy about his thoughts, responded on Twitter to a comment from Bridget Phetasy, Playboy advisor, who tweeted that Streep was “about to be canceled” following her comments about how the term “toxic masculinity” was hurting “our boys” and her claim that “women can be pretty f***ing toxic.” (RELATED: Exclusive Video: Trump Jr. And Guilfoyle Unleash On Hillary Clinton Over ‘Civility’ Comment)

“#ImWithHer,” Trump Jr. tweeted to his millions of followers, along with retweeting the article about what the “Mamma Mia!” star had said. (RELATED: Princeton Seeks To Restrain Men And Their ‘Toxic Masculinity’) 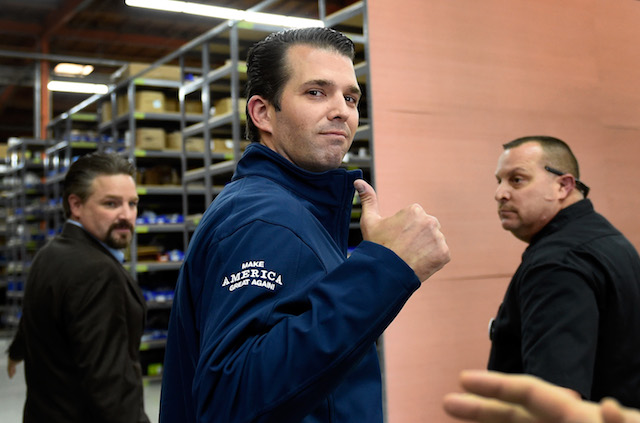 Donald Trump Jr. gives a thumbs-up after a get-out-the-vote rally for his father…on November 4 in the battleground state, and on Election Day November 8. (Photo by David Becker/Getty Images)

The “I’m With Her” hashtag became popular during the 2016 election and was used by supporters of Democratic Presidential nominee Hillary Clinton. (RELATED: Michael Moore Mocks Donald Trump Jr. Over ‘Trumpland’)

“Sometimes I think we’re hurt. We hurt our boys by calling something toxic masculinity. I do,” the 69-year-old actress shared during a Q & A for the next season of her hit show “Big Little Lies,” per the Independent UK.

“And I don’t find [that] putting those two words together … because women can be pretty f***ing toxic,” she added.

Streep continued, “It’s toxic people. We have our good angles and we have our bad ones.”