A team of Canadian researchers are set to lecture teachers about the moral dangers of dodgeball, a sport they say teaches kids to single out and violently dominate weaker students.

Dodgeball is a tool of “oppression” and “miseducative,” the researchers say in the abstract of a paper cited by the National Post, which they will present in Vancouver at the Congress of the Humanities and Social Sciences, a summit for thousands of academics happening in early June. The “hidden curriculum” it teaches students is out of step with the larger curriculum, they argue.

“As we consider the potential of physical education to empower students by engaging them in critical and democratic practices, we conclude that the hidden curriculum is antithetical to this project, even when it reflects the choices of the strongest and most agile students,” the abstract reads. 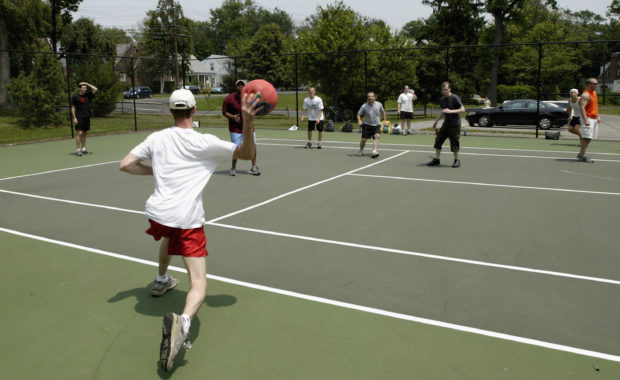 Co-founder Anders Gilbertson takes aim at an opponent during a game of ‘Dodgeball’ at a tennis court July 17 in Silver Spring, MD. (Micah Walter/Getty Images)

The researchers add that dodgeball “reinforces the five faces of oppression” as defined by the late University of Chicago theorist Iris Marion Young. Those are marginalization, powerlessness, helplessness of those perceived as weaker, exploitation and cultural domination, according to the abstract. The story in the National Post is part of a larger series on the most interesting research to be presented at the conference.

“Despite the fact that many physical educators understand their vital role in helping students develop robust, equal, productive relationships and critical awareness, their practices on the ground do not always reflect this agenda,” they write. “We suggest that this tension becomes sharply visible in the common practice of allowing students to play dodgeball.

An informal reader poll by the Vancouver Sun suggests Canadians might not be receptive to the idea of ridding schools of the sport. More than 86 percent of respondents to the online poll at the bottom of a report on the paper said schools should not outlaw dodgeball.

The sport has been targeted by progressive activists in the United States as well. A group of teachers and education experts attempted to ban the dodgeball in Louisiana in 2017, but failed to get the initiative past the state school board.

“Dodgeball is an activity that we know many of our students enjoy,” the board’s vice president told a Baton Rouge newspaper. “We want to be careful that we don’t create regulations that would stand in the way of students getting fit and enjoying P.E.”

1
German Authorities Find ‘Weapons Of War’ During Raid Near Radical Mosque
World
2
HILL: Davos Globalists Get Trumped Once Again
Opinion
3
EXCLUSIVE: Columbia University Found Him Guilty. But He's Got Voice Recordings, And He's Not Afraid
The Mirror
4
Geraldo Rivera Knocked Rudy Giuliani For Deteriorating 'Before Your Very Eyes' — The Audience Was Not Happy
Politics
5
'Get Rid Of Her': Recording Appears To Show Trump Ordering Removal Of Ambassador To Ukraine
Politics