Servers and bartenders in the Washington, D.C., restaurant industry were quick to criticize New York Democratic Rep. Alexandria Ocasio-Cortez for supporting the One Fair Wage campaign, which calls to raise the minimum wage for tipped workers to a full minimum wage at the federal level.

Ocasio-Cortez went to a bar in Queens, New York, on Friday to raise awareness for an initiative that was put forward by Restaurant Opportunity Center United (ROC), a government-funded group that claims, if the measure passed, tipped workers would all be paid the same amount, regardless of effort or seniority.

Travis Weiss, the director of culinary concepts at Rebellion DC, mentioned that there were no tipped employees at the event in Queens, where Ocasio-Cortez was bartending for the day.

“[Ocasio Cortez] is hack and a disgrace. An ROC-sponsored, invite-only event where no ACTUAL tipped employees were present shows you the depth of her concern for the real workers,” Weiss told the Caller.

ROC pushed the same message in D.C. in 2018, successfully getting enough votes for an initiative that was later repealed by the D.C. city council after continued pushback from workers across the nation’s capital.

The One Fair Wage campaign’s mission is to raise the minimum wage for tipped workers, meaning non-tipped employees would be paid the same as a tipped employee. Many in the industry are against the proposal, saying businesses would have to raise prices or add a service charge in order to afford the minimum wage.

Supporters of the initiative say that only a very small portion of restaurant workers are in favor of the current tipped wage. ROC also says that those in favor of a tipping wage system are mostly white, non-immigrants who work for bigger restaurants in the city.

After seeing Ocasio-Cortez fully support the One Fair Wage campaign, many in the D.C. restaurant industry condemned the freshman congresswoman for pushing for something they say would negatively impact the city greatly. They also cast doubt about her bartending experience after watching videos of her making drinks Friday.

“I hate to follow in her footsteps of using insane comparisons like Climate Change and World War II. But if her bartending career was anything like her tenure as a representative… she probably really could have used $15 an hour to supplement the lack tips due to bad service,” food and beverage director Dane Nakamura told The Daily Caller. 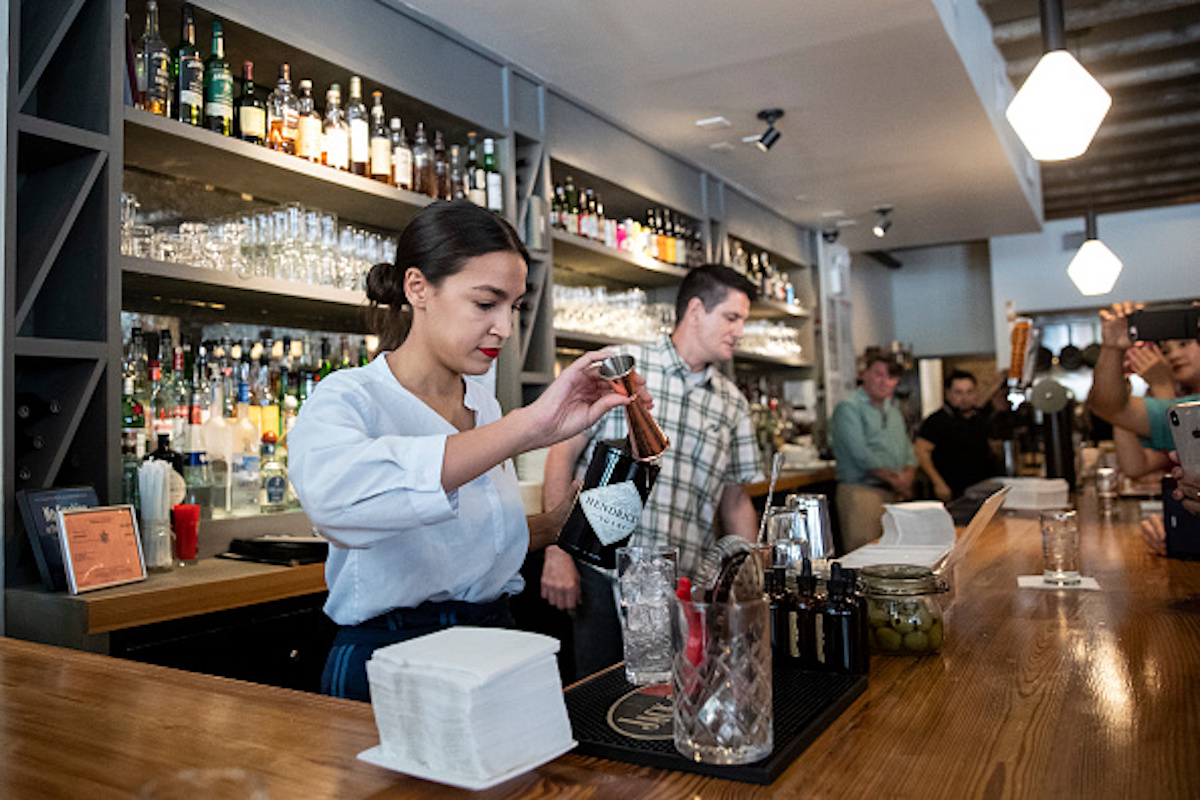 Rep. Alexandria Ocasio-Cortez works behind the bar at the Queensboro Restaurant, May 31, 2019 in the Queens borough of New York City. (Photo by Drew Angerer/Getty Images)

Branden Beasley, the owner and founder of Bar Xperience LLC, said Ocasio-Cortez does not know how to pour or shake a drink.

“I can speak for a lot of people that I saw comment on it. I’m thinking one of those part-time bartenders that maybe went to college and had a few shifts on the side she calls herself a bartender. She clearly doesn’t know how to pour, doesn’t know how to shake,” Beasley said.

“It was obvious. Like you know how you can tell when somebody has been trained on something like when someone takes a gun out cocks it, unload it, shoot, you know, and you can tell like wow they’ve been trained, it’s the same thing with bartending, you can tell instantly if someones actually a bartender of if someone’s just been behind the bar once or twice,” he continued.

“She strikes me as somebody that like pretends to be a bartender, may have, like, poured a few beers back in her day on a few moonlight shifts after she’s done with her classes, but clearly is not a trained or experienced bartender,” Beasley concluded.

Other workers in the D.C. restaurant industry, like Travis Weiss, say ROC hosted the event but did not invite anyone from the restaurant industry who was opposed to raising the minimum wage who could provide a different point of view.

“When I saw the video, I felt a lot of the stuff that got put out from ROC and [Ocasio-Cortez] herself. And it was a perfectly orchestrated event. They didn’t let anyone who didn’t agree with their ideology come through. They’d only invite to people who already supported them, and they had no interest in actually discussing the policy with people that would be directly affected by it,” Zac Hoffman, a bartender at Roy Boys said to the Caller. 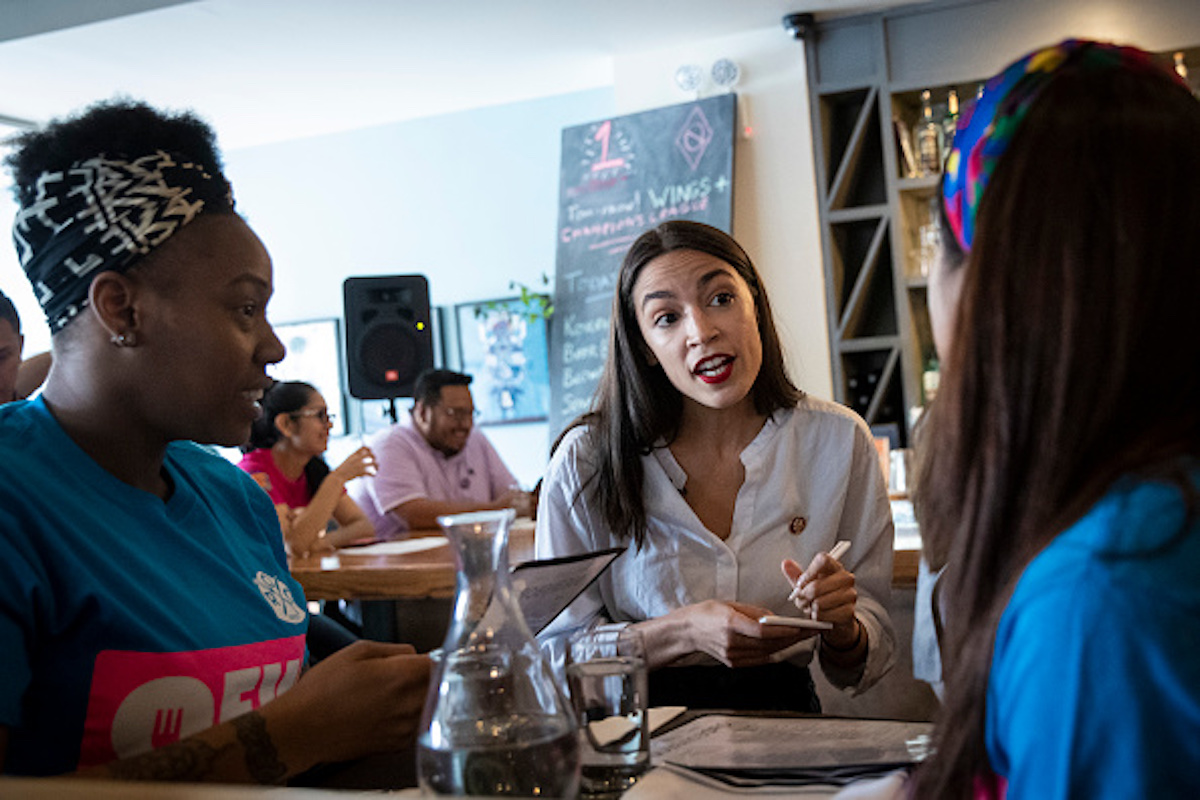 Rep. Alexandria Ocasio-Cortez waits on a table at the Queensboro Restaurant, May 31, 2019 in the Queens borough of New York City. (Photo by Drew Angerer/Getty Images)

Others say they believe Ocasio-Cortez is just trying to connect with the people and make sure that everyone is happy but say that she does not understand the business side of it, which servers say would hurt their restaurants and greatly affect their wages.

“I think what [Ocasio-Cortez] is trying to do and a lot of people are trying to tie in with human condition we all want to be good and we all want to be fair and we all want to make sure everyone’s happy realistically from a business standpoint, it’s horrible. We are automatically making businesses pay 1/3 more than what are already paying. And that’s all about how much labor costs,” Decker Beasley who, recently joined Service Bar as a bartender said to the Caller.

ROC continued to defend the One Fair Wage campaign and Ocasio-Cortez in a phone call with the Caller, denying the claims that the restaurant industry was not allowed to attend the event in Queens.

Ocasio-Cortez’s office did not respond when asked about her support for the One Fair Wage campaign or about the criticism of her bartending experience.