The following is an excerpt from “Unmasked: Big Media’s War Against Trump,” out today from Humanix Books.

In July 2017, the media exploded over a meeting in June 2016 at Trump Tower between Donald Trump Jr. and Natalia Veselnitskaya, the alleged “Kremlin-backed lawyer” (she wasn’t Kremlin-backed) at which Russians promised “dirt” on Hillary Clinton. But before we get into this coverage, let’s stop and consider: So bloody what? At one stage or another, there were probably a hundred meetings between Team Hillary and God only knows who, from the candidate on down, discussing dirt on Donald Trump. It’s what campaigns do. It’s also what journalists do.

If the evidence showed that this Russian woman was knowingly an agent of the Russian government offering ammunition to tilt the election and if there was any explicit or even implicit quid pro quo on the part of Team Trump to alter Russia policy in a favorable direction, you had a story, and a big one, too. Indictments and impeachment would follow, and deservedly so.

If. But there wasn’t a lick of evidence. Trump administration policy toward Russia was tougher than Obama’s! Still the “if” justified the endless speculation that Trump was probably a criminal. America would be faced with the nightmare that it had elected a traitor. Every mini-scoop was inflated into the latest contender in the urgent liberal question “Will this finally get Trump impeached and removed?” The media obsession was palpable. The evidence of their fever could be found on your own smartphone. (RELATED: Russian Lawyer Linked To Trump Tower Meeting Is Charged In New York Case)

On the night of July 11, the CNN app was all ablaze with the Trump Junior jeremiads. One after another, the headlines were panicky and tabloidish:

The National Enquirer would be proud of CNN’s passion. In the midst of this stream of speculation verging on mindless gossip, down in the fifth spot, was this other piece of news: “Special ops forces among 16 dead in Marine Corps plane crash.” Way down at the number eight spot was this: “Earth’s sixth mass extinction is more severe than we thought.” But Marines dying and alleged mass extinctions are boring and secondary to wild speculation about Russia. The next headline on the CNN phone app was “Tapper to Trump Jr.: Why so many lies?”

There are no longer any guardrails for CNN. Virtually every “news” story is a blatant attack on Trump. How do CNN’s colleagues view this abandonment of any semblance of balance? you ask. The New York Times mourned in all seriousness that CNN was losing in the ratings race to “the more ideologically driven coverage of Fox News and MSNBC.” We kiddeth not. 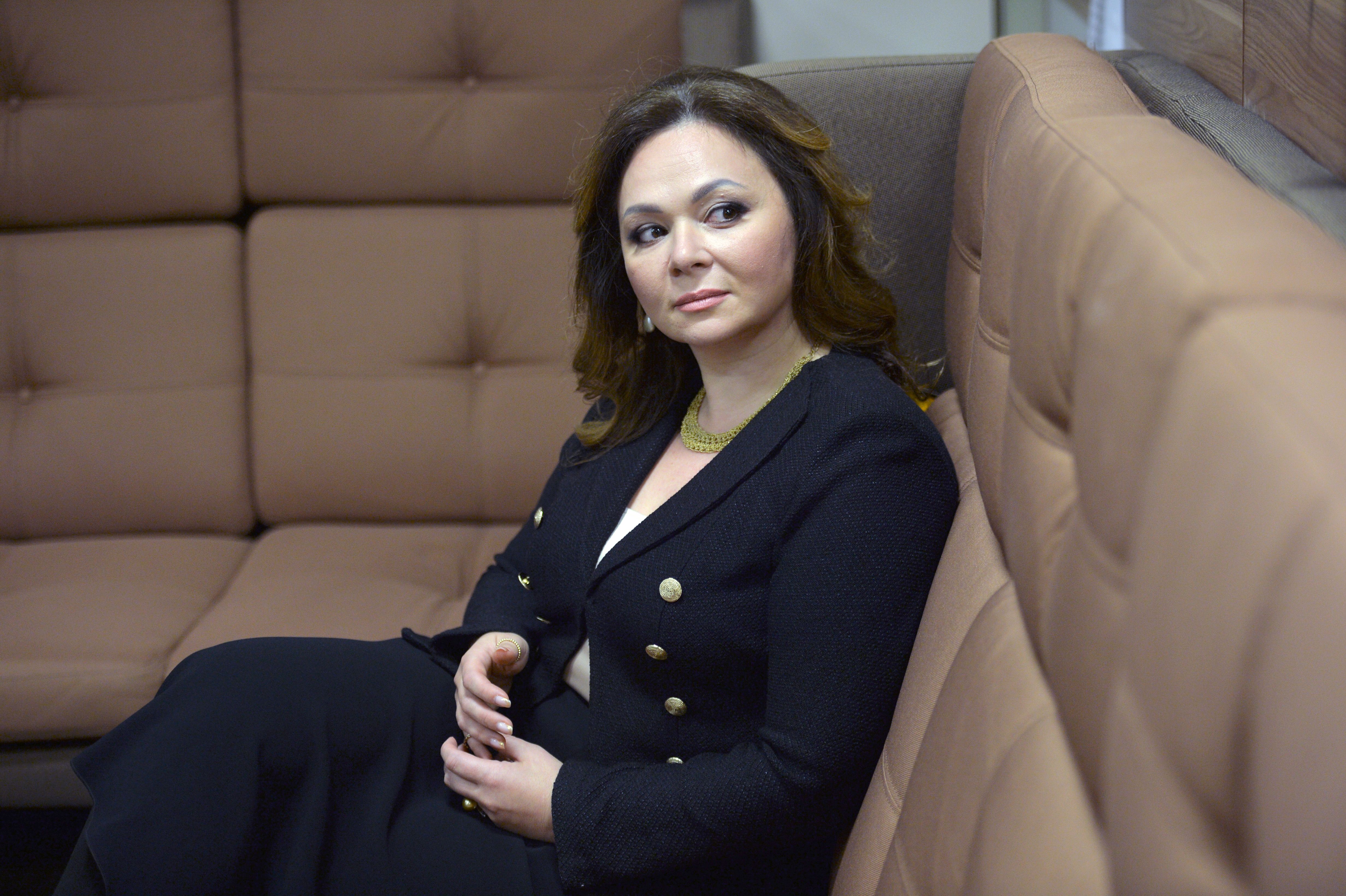 When Democrats sit in the White House, they have so many liberal “solutions” to advance that their approval ratings cannot be allowed to be soiled by scandals, and so the media ignore them if possible and spin with wild abandon when necessary. For years, President Clinton could count on reporters to keep Kenneth Starr’s investigation on the back burner, insisting that Clinton’s good works were being infringed on by a hostile prosecutor doing work of questionable public value. In 1997, as Clinton toured the Caribbean, ABC reporter John Donvan announced, “When the President fended off a Whitewater question by saying, ‘Look, I’m just down here doing my job,’ the Caribbean journalists burst into applause, in part because they had heard enough about Whitewater and wanted to talk more about bananas.”

Donald Trump has received the opposite treatment from the very same media outlets. Scandals have always crowded out policy — unless the press insisted that the policy was itself scandalous, in which case it becomes news. When Mueller first whispered that indictments were coming down in October 2017, ABC’s David Wright was thrilled. “Call it Russian roulette!” he declared in an overly excited manner. “The first criminal charges imminent in the independent counsel’s investigation of Russian meddling in the 2016 election and possible collusion by Trump associates!” George Stephanopoulos, always the partisan, drooled, “Is it someone close to the White House? Is he going straight to the top?”

All that was missing here was “Please! Please!”

The media provided massive coverage — often “breaking news” — of Manafort’s troubles, unless the real news undermined their narrative, in which case it was deliberately ignored. In May 2018, presiding federal Judge T. S. Ellis III broadsided Mueller’s prosecutors in court. The smackdown was epic. “You don’t really care about Mr. Manafort! You really care about what information Mr. Manafort can give you to lead you to Mr. Trump and an impeachment, or whatever.” He added what was obvious to anyone looking at the evidence impartially: “I don’t see what relation this indictment has with anything the special counsel is authorized to investigate. What we don’t want in this country is, we don’t want anyone with unfettered power.”

But the media weren’t examining the evidence impartially. They were way past that. The Donald was guilty, facts be damned. (RELATED: Nadler Claims Don Jr. Was Offered Stolen Information In Trump Tower Meeting. That Didn’t Happen)

The Ellis bombshell appeared on the front page of the Washington Post, as was appropriate. The networks, in contrast, refused to budge. ABC devoted two minutes to it, and that was that. CBS and NBC managed thirty seconds between them. Taxpayer-funded networks tanked. PBS had nothing, and NPR had one question on a Saturday morning newscast. This was a test of the fairness and balance of the Mueller-obsessed networks, and they flunked, and they couldn’t care less. The show had to go on.

Then there were Trump Tower revelations that were omitted. To say they were inconvenient to the prosecution of Trump is an understatement. What follows is something we’ll wager is unknown by 99 percent of the American people. It turns out that Natalia Veselnitskaya — that Russian lawyer who had met briefly at Trump Tower with Donald Trump Jr. — had dinner with Hillary-funded Fusion GPS co-founder Glenn Simpson on the night before. And the night after the Trump Tower meeting! Simpson boldly insisted that he knew nothing about the meeting in between. And if you believe that, you’ll also believe that Bill Clinton’s a regular Ward Cleaver. 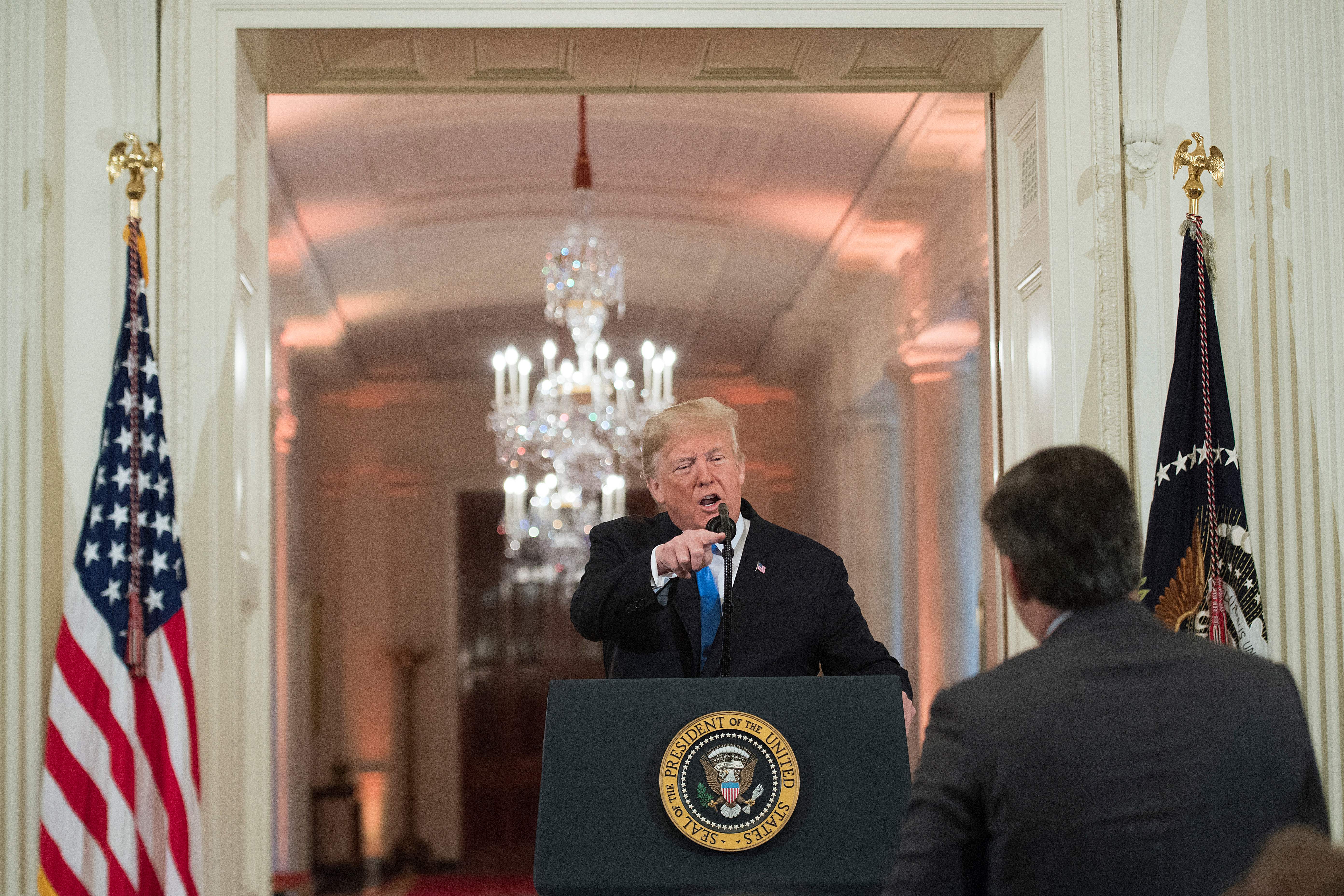 US President Donald Trump gets into a heated exchange with CNN chief White House correspondent Jim Acosta (R) during a post-election press conference in the East Room of the White House in Washington, DC on November 7, 2018. (Photo by JIM WATSON/AFP/Getty Images)

How could that not be the story? The evidence now pointed directly to a trap that had been sprung by Team Hillary. Now you had real intrigue. If it had been seen as a credible accusation that Don Jr. was colluding with the Russians, given the before-and-after with Team Hillary, was there now not the potential that it could have been far more sinister than that — between the Russians and Hillary?

Network coverage of this real bombshell? Zero. Zip. Nada. If the networks wanted to obsess over the Trump Tower meeting, why not devote some serious minutes to this revelation with red flags all over it? Because exploring this behavior would unspool months of wildly speculative reporting on the Trump campaign seeking dirt on Hillary Clinton from the Russians to defeat her. The shoe would now be firmly on the other foot. Now the accusation of treason would fly against the former secretary of state who had shown no hesitation to have her foundation shake down foreign governments for millions.

They were never interested in the notion that Hillary Clinton was colluding with Russians to defeat Donald Trump. Destroying Trump has been the imperative from the start. At the center of it all was not Charles Schumer, or Nancy Pelosi, or the Never Trumpers. It was the press. (RELATED: Report: Bank Flagged ‘Suspicious’ Payments To Lobbyist Who Worked With Fusion GPS And Attended Trump Tower Meeting)

In schools, they used to teach that journalism was defined as telling the public what happened today, along with who did it, where it happened, how and why. But too often in political coverage, what’s already happened is downplayed and even ignored while “news” channels prattle endlessly about what’s going to happen next. That’s exactly how the media covered the Russia probe, constantly yammering about the heinous crimes Mueller would find, or how Trump might fire Mueller, or the man who appointed him, deputy attorney general Rod Rosenstein. Collusion was a fantasy all along and underscores a terrible reality. For journalists, the facts just do not come first. These self-righteous leftists who marched under the banner of “objective journalism” while advancing the overthrow of a duly elected president did more than just lose their credibility. They committed professional suicide.

L. Brent Bozell III is founder and president of the Media Research Center. Tim Graham is Director of Media Analysis at MRC.