“Our conundrum, which is to keep the opposition united, has proven devilishly difficult,” Pompeo said in the recording, according to The Washington Post. “The moment Maduro leaves, everybody’s going to raise their hands and [say], ‘Take me, I’m the next president of Venezuela.’ It would be 40-plus people who believe they’re the rightful heir to Maduro.”

“I couldn’t tell you the timing” of Maduro’s removal from power, Pompeo said, adding he believed that Maduro would be ousted, according to WaPo. 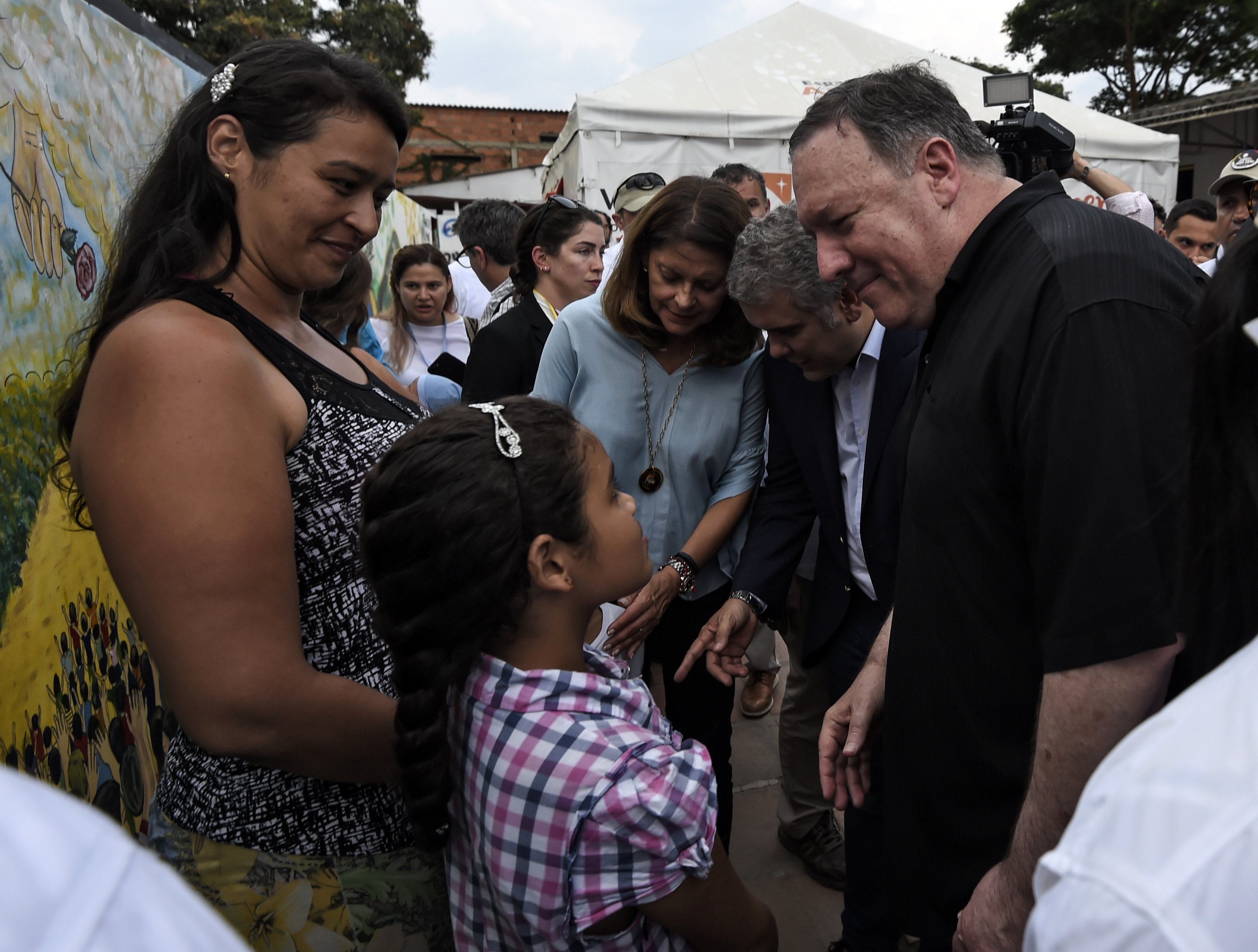 US Secretary of State Mike Pompeo (R), accompanied by Colombian President Ivan Duque (2-R) talks with Venezuelan refugees during a visit to the Transitional Attention for the Migrant Office in Cucuta, Norte del Santander Department, Colombia, on the border with Venezuela, on April 14, 2019. (JUAN BARRETO/AFP/Getty Images)

Forging a coalition to stand against Maduro was important to President Donald Trump when Pompeo served as CIA director, Pompeo said, according to WaPo. He left the position in April 2018 to become Trump’s secretary of state.

The May 28 meeting was with the Conference of Presidents of Major American Jewish Organizations, a group that describes itself as a “proven and effective voice of organized American Jewry.” Its member organizations include the Anti-Defamation League, the American Israel Public Affairs Committee and Hillel. WaPo published leaked audio of Pompeo discussing a Middle East peace plan Sunday.

He was candid about what could be a long road ahead.

“Maduro’s departure is important and necessary but completely insufficient. … We’ve been working, and it took this long to get to where we are today, where you have a leader — tenuous as it may be — who could’ve been arrested while we’re sitting in this room, who has managed to cobble together the opposition,” Pompeo said.

“We were trying to support various religious . . . institutions to get the opposition to come together,” he added, according to WaPo.

Pompeo reportedly joked about being fired by Trump via tweet and avoided answering some questions because “someone’s probably got a tape recorder on, so I won’t say,” reported WaPo.

The secretary of state’s remarks contrasted with the Trump administration and other governments’ declarations that Guaido is clearly next in line to lead the oil-rich South American country.

Reaction to Venezuela’s situation has been varied in the U.S. as well. Federal agents stormed the Venezuelan Embassy in the U.S. May 16 and ousted four remaining protesters sympathetic to Maduro, according to the State Department. In addition, several progressive Democrats broke with their party to criticize Trump for his January decision to oppose Maduro.

The State Department did not respond to The Daily Caller News Foundation’s request for comment at the time of publication.