June is gay pride month in America and a time during which members of the LGBT community are celebrated throughout the west. However, the situation in the Middle East is starkly different for homosexuals who, instead, face punishment and even death for their sexual orientation.

While Al Jazeera’s AJ+ celebrated Pride month, its state backer Qatar continues to brutally oppress and attack members of the LGBT community. Homosexuality is illegal in Qatar. According to the International Lesbian, Gay, Bisexual, Trans and Intersex Association (ILGA), article 258 of Qatar’s legal code condemns any man who “copulates with a male” with a seven-year prison term. Meanwhile, article 296 condemns anyone engaged in “leading, instigating or seducing a male in any way to commit sodomy” to up to five years in prison. (RELATED: Al Jazeera Gets Twitter To Silence Critics Of Its Video Implying Jews Benefited From The Holocaust)

One need look no further than Qatar’s spiritual leader, and the “undisputed leader of the Muslim Brotherhood” Yusuf al-Qaradawi, whose version of “Islamic democracy” sees homosexuality as a perversion of Allah’s will and a crime punishable by death, including by stoning. When Qaradawi was asked about homosexuality on the Al Jazeera news network in August 2005, he reportedly pointed to a 2004 fatwa he issued, “Homosexuality and Lesbianism: Sexual Perversion,” in which another imam called for the stoning of gays. “Should [the punishment for sodomy] be the same as the punishment for fornication, or should both the active and passive participants be put to death? While such punishments may seem cruel, they have been suggested to maintain the purity of the Islamic society and to keep it clean of perverted elements,” Qaradawi wrote in the fatwa.

At the time, the gay rights group OutRage! commented, “Dr. Qaradawi appears to be encouraging the murder of a person in the UK, which is a serious criminal offense. We are astonished that Mayor Livingstone is still supporting him. We are appalled that Dr. Qaradawi continues to be supported by fundamentalist organizations such as the Muslim Association of Britain, and by far-left groups like the Socialist Workers Party and Respect.” 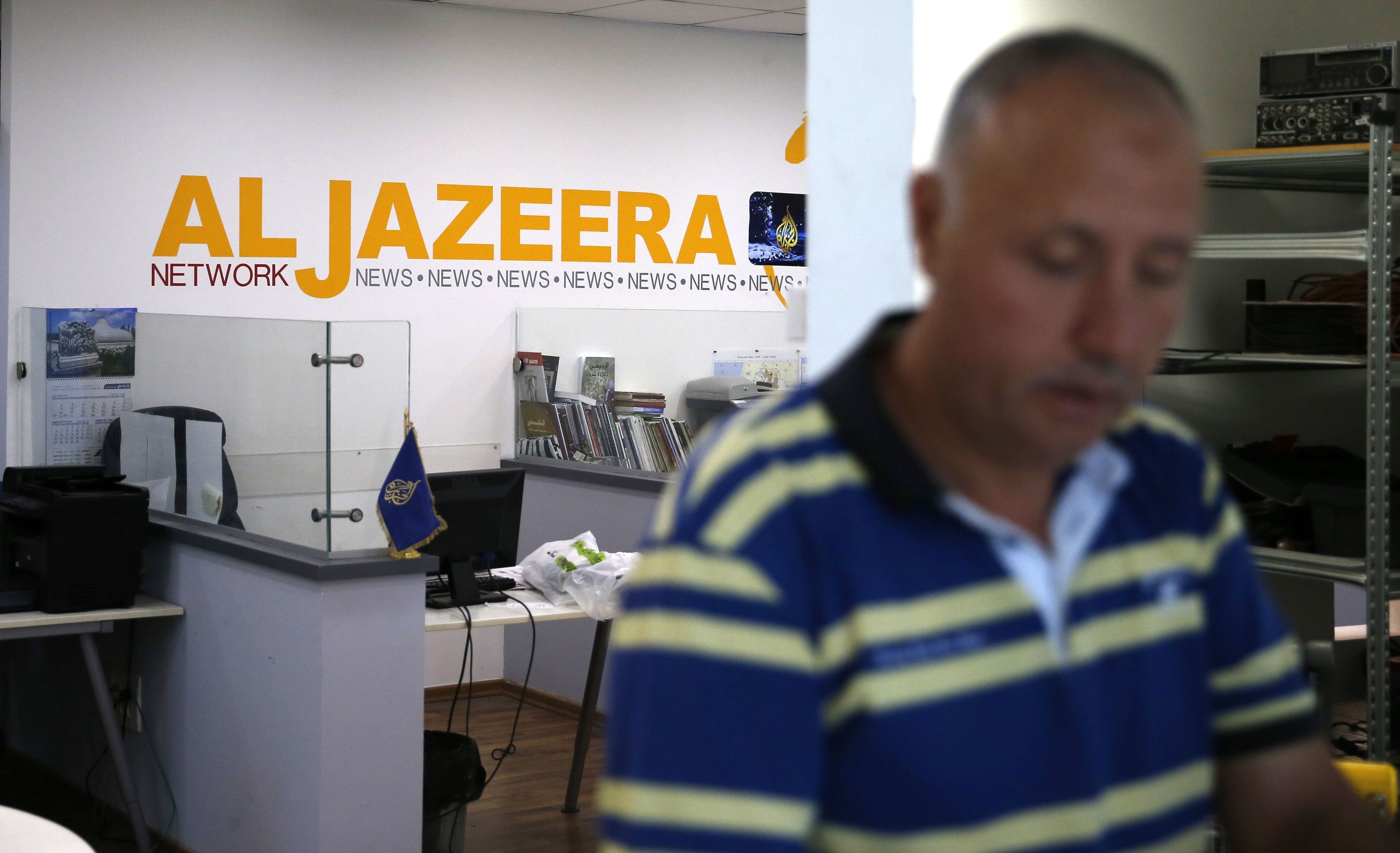 An employee of the Qatar based news network and TV channel Al-Jazeera is seen at the channel’s Jerusalem office on July 31, 2017.
Israel said on August 6, 2017 that it planned to close the offices of Al-Jazeera after Prime Minister Benjamin Netanyahu accused the Arab satellite news broadcaster of incitement. A statement from the communications ministry said it would demand the revocation of the credentials of journalists working for the channel and also cut its cable and satellite connections. (AHMAD GHARABLI/AFP/Getty Images)

On its site, ILGA noted that Al Jazeera reported at the time that Qaradawi delivered his opinion on the death penalty for homosexuality “in response to allegations that Qatar’s 25-year-old Crown Prince Tameem Bin Hamad Al-Thani was spotted at the popular London gay night club, G.A.Y. The prince and his male partner, Michael Heard, were allegedly banned from G.A.Y. for a month following a fight.”

However, various online sites linked to the original Al Jazeera article which appears to have been removed or deleted from the website.

Qaradawi’s nefarious views extend beyond his hostility toward the LGBT population. He has made no secret of his disdain for Jews and the State of Israel and has called for a new Holocaust, led by Muslims, against Jews. In a January 2009 speech that aired on Al Jazeera, Qaradawi said, “Throughout history, Allah has imposed upon the [Jews] people who would punish them for their corruption. The last punishment was carried out by Hitler.”

He went on to say, “By means of all the things he did to them – even though they exaggerated this issue – he managed to put them in their place.” Following this, he called for an Islamic holocaust against the Jews. “This was divine punishment for them. Allah willing, the next time will be at the hand of the believers.” (RELATED: Al Jazeera Reportedly Aired Palestinian Girl Reading A Poem Calling Jews ‘Pigs’ And ‘Apes’)

He then went on to predict the fall of America saying, “We say to the West, and especially to America, that Allah will not let you support falsehood. He will not let you support inequity against justice… The USSR collapsed before their eyes. The USSR possessed military power, including a nuclear arsenal, but nevertheless, it collapsed. According to the law of Allah, they should collapse as well, unless they pull themselves together and stand by what is just.”

Celebrating Pride abroad while Qatar continues to oppress gays and lesbians at home is another example of the gulf nation’s two-faced public relations strategy, which may win it favors in Washington, but it hides a darker truth.