In the wake of the “Vox Adpocalypse,” Steven Crowder says he has received more Mug Club subscriptions in a single weekend than in the company’s entire history.

“I’m not sorry. I’ll tell you what I am though. I am grateful, I am really grateful to the outpouring of support that we’ve seen from people,” Crowder said in a YouTube video released Monday night in which he detailed his considerably increased Mug Club membership.

Mug Club is a subscription service that offers access to Crowder’s show “Louder with Crowder” Monday through Thursday nights and a mug which is featured on the show. The cost is typically $99 per year, but Crowder lowered the price to $69 over the weekend, advertising, “Fight back against the Vox Adpocalypse & Get $30 Off Mug Club.” 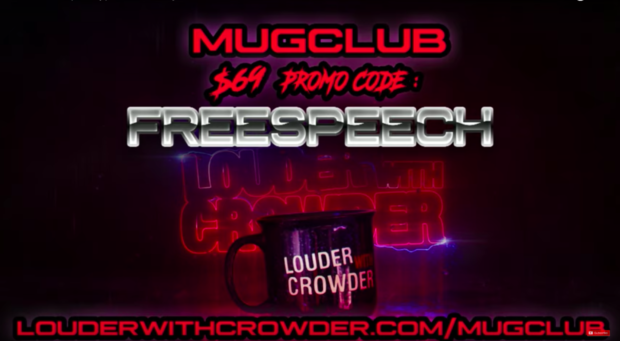 Steven Crowder’s advertisement for Mug Club that uses the “Freespeech” promo code in response to the “Vox Adpocalypse.” (Youtube)

Crowder also noted that despite the discount he offered, over half of people who joined Mug Club did not use the promo code, and instead payed the full $99. “I’ve received so many messages, emails from people saying ‘We wanted to pay full price just because we wanted to support what it is that the team is doing.’ And I really appreciate it,” he said.

YouTube announced that they were demonetizing Crowder’s channel in response to complaints from Carlos Maza, the producer of Vox’s “Strikethrough” series, alleging he was harassed by Crowder “for being gay and Latino.” Maza also created a compilation video of statements Crowder made against him. Youtube said that Crowder had not violated its community standards, but that his “pattern of egregious actions has harmed the broader community,” resulting in his demonetization.

“Abusers use [demonetization] as proof they’re being ‘discriminated’ against,” he tweeted in response.

Abusers use it as proof they’re being “discriminated” against. Then they make millions off of selling merch, doing speaking gigs, and getting their followers to support them on Patreon.

The ad revenue isn’t the problem. It’s the platform.

Sending support from Ireland for you & all of the other creators that people are trying to silence or get rid of. It’s great to see people from very different camps able to come together; united with a common goal of allowing free speech!

Another follower pointed out that Crowder’s increased revenue is a direct result of Maza’s advocacy.

For real, the number of #MugClub memberships Carlos is responsible for has to be in the thousands… If not people need to wake up and hop on board.

Maza seems to have inadvertantly caused an increase in Crowder’s revenue, despite the demonetization of his YouTube channel.