Social justice advocates on Twitter are fired up over a fictional advertisement depicting a transgender woman with an erect penis in the highly anticipated upcoming video game “Cyberpunk 2077.”

One user, @neondreamgirl, who lists her gender pronouns in her bio, appeared shocked that the image was featured saying, “How is this not on my timeline right now, is this real[?]”

How is this not on my timeline right now, is this real pic.twitter.com/XzCWHH6rhu

Others agreed with her that the image represented a negative stereotype of transgender people in video games:

So, @nvidia @NVIDIAGeForce is promoting a game “Cyberpunk 2077” with homophobic spoken lines in the promo trailer and transphobic graphics inside the game.

Our home is AMD only from now on, as are my IT purchase recommendations at work. https://t.co/PCCXJ3ra1k

I’m on a train and Twitter is a bad, limited space for talking about trans bodies as transgressive and beautiful but needless to say, this doesn’t feel like “Wow, look at how progressive we are in the future” and more like a GTA billboard.

From the team that brought you an attack helicopter joke among other things, now transphobic material in-game for Cyberpunk 2077, too!

Keanu Reeves can’t save this for me. https://t.co/ZTSxJ01ZTA

“Cyberpunk 2077,” which was developed by CD Projekt Red, is a first-person role-playing game set 57 years later in a dystopian future in which corporations and technology control every aspect of life.

The game has garnered a massive following and is considered one of the most highly anticipated releases in recent years. CD Projekt Red also developed “The Witcher 3: Wild Hunt” which, as of 2018, has sold over 33 million copies worldwide.

“Personally, for me, this person is sexy,” said Projekt Red artist Kasia Redesiuk during a Polygon interview. “I like how this person looks. However, this model is used — their beautiful body is used — for corporate reasons. They are displayed there just as a thing, and that’s the terrible part of it.”

Many were quick to point out that this isn’t the first time the game has gotten itself caught up in controversy. Last year, their official twitter responded to a user who tweeted, “I WANT MORE GUYS,” (presumably in the game) with, “Did you just assume their gender?” (RELATED: VIRGINIA PARENTS TAKE ON PUBLIC SCHOOL SYSTEM OVER TRANSGENDER POLICY) 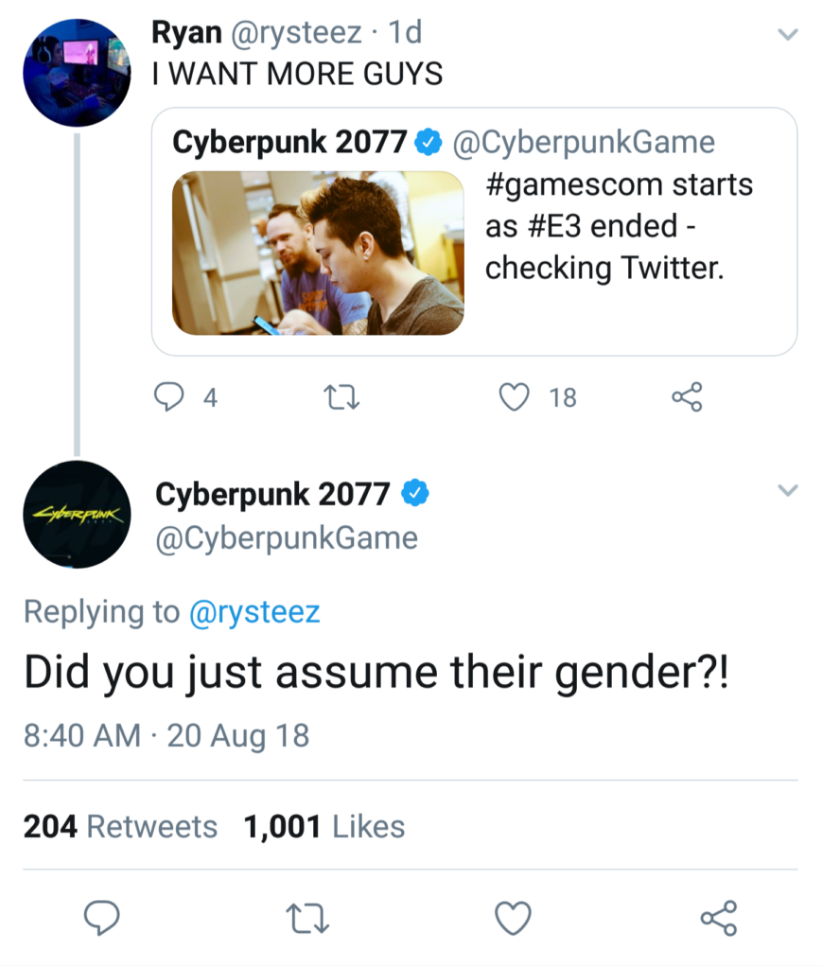 This brought in a lot of negative press and angered some fans on Twitter. Eventually, however, the “Cyberpunk” account deleted the tweet and released an apology, saying, “Sorry to all those offended by one of the responses sent out from our account earlier. Harming anyone was never our intention.”

Sorry to all those offended by one of the responses sent out from our account earlier. Harming anyone was never our intention.

Some fans urged the company to not apologize for a “harmless joke.”

Very very disappointed that you said sorry for that harmless joke..????

And again in the “Cyberpunk” account’s recent controversy involving the transgender woman, many fans defended the game’s decision to include the fictional advertisement in the gameplay:

What I gathered from the recent Cyberpunk 2077 scandal:
1. Humor, good or bad, is dead.
2. Some Transgender people like to block anyone who has a different opinion than themselves, saying that they are transphobic.
3. They may not know how drama works on the internet.

“Cyberpunk” is known for very sexualized themes and bombastic representations in most adaptions of the genre. There were also many mentions of transgender females within rocker boy culture in the source material of 2077.

Cyberpunk is known for very sexualized themes(to imitate modern society), and bombastic representations in most adaptions of the genre. There were also many mentions of transgender females within rocker boy culture in the source material of 2077.

I’m queer, but idk how this is really offensive imo. It seems like a funny mix and match joke which is relatable for me.

Some people even took offense to the use of the word “c*cksucking” in the game’s newly released trailer:

The controversy comes after the game made new announcements at their E3 summit on Sunday. Projekt Red received widely positive feedback from fans when they confirmed Hollywood star Keanu Reeves will be a featured character in the game’s story. Reeves will play Johnny Silverhand, a major character from previous “Cyberpunk” installments.

CD Projekt Red has yet to respond for comment at the time of publication.