She was seen standing silently without her hand over her heart when the national anthem played on Tuesday while her teammates sang and placed their hands over their hearts, The Blaze reported. Many people took to social media in response showing both their support and disagreement with her decision.

so weird to have a scowl while your national anthem, the one that gave you the freedom to pretty much actually PLAY in this game @mPinoe #USWNT

“Because I’m as talented as I am, I get to be here, you don’t get to tell me if I can be here or not,” she told Yahoo News. “So it’s kind of a good ‘f-you’ to any sort of inequality or bad sentiments that the [Trump] administration might have towards people who don’t look exactly like him. Which, God help us if we all looked like him. Scary. Really scary. Ahh, disturbing.”

Rapinoe became the first white athlete to kneel during the national anthem in 2016, supporting former professional football player Colin Kaepernick. The former NFL quarterback made headlines when he knelt during the anthem before a game three years ago. Kaepernick has said that kneeling during the national anthem was a way to protest against police brutality and racism. (RELATED: Soccer Star Takes Knee During National Anthem, Nobody Bothers Attending The Game [Photo]) 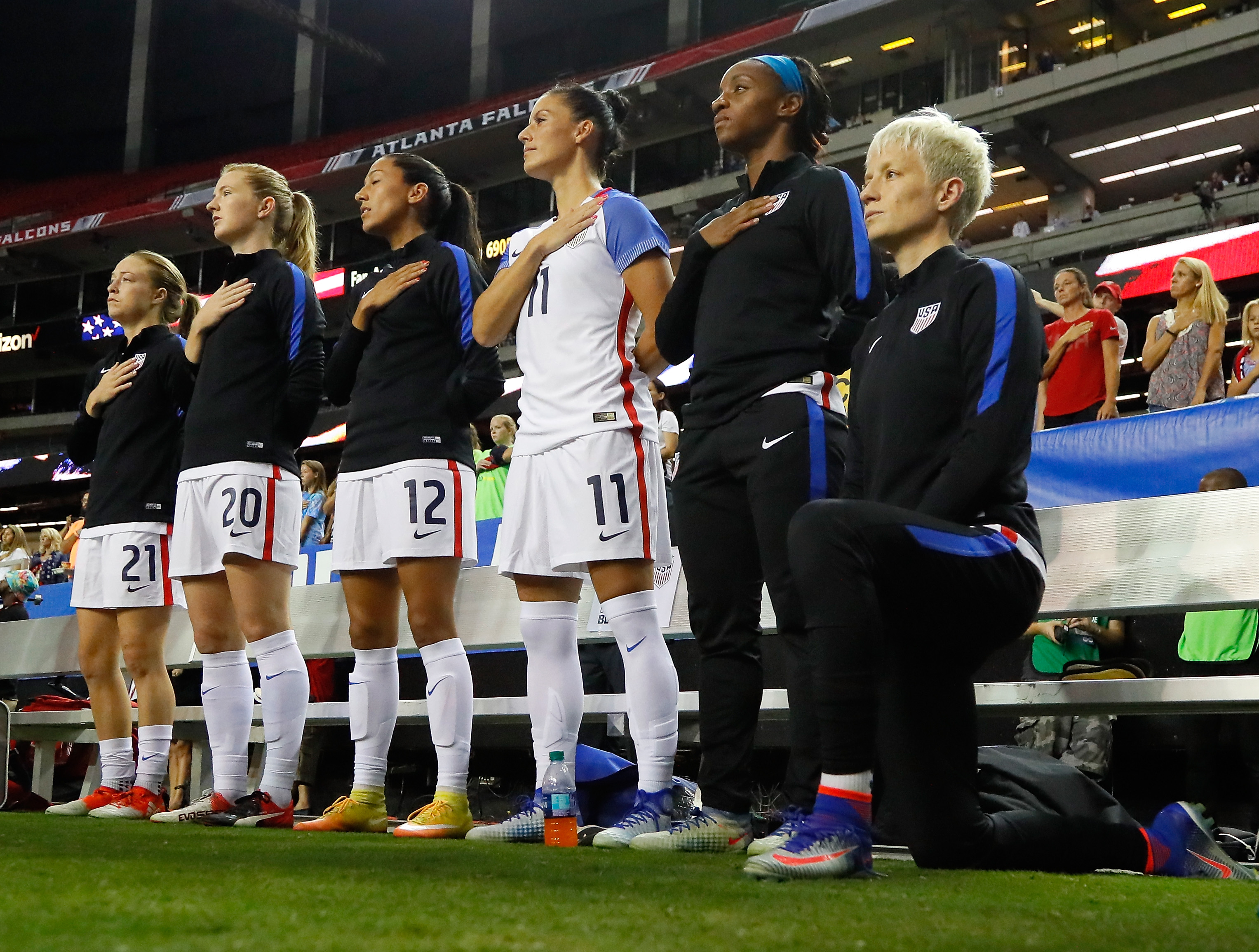 Megan Rapinoe kneels during the National Anthem prior to the match between the United States and the Netherlands at Georgia Dome in 2016. (Kevin C. Cox/Getty Images)

After Rapinoe knelt, U.S. soccer gave a statement and adopted a rule that requires players to “stand and honor the flag.” Rapinoe has said that she was not happy with this decision and with the statement.

“Using this blanketed patriotism as a defense against what the protest actually is was pretty cowardly. I think the NFL does it,” Rapinoe told Yahoo Sports. “I felt like the statement from U.S. Soccer, and then the rule they made without ever talking to me, that was the same as what the NFL was doing – just to not have the conversation, to try to just stop me from doing what I’m doing instead of at least having a conversation, and trying to figure out a [solution] that makes sense for everyone.”

Rapinoe is a captain on the U.S. women’s soccer team. The team beat Thailand 13-0 on Tuesday. The women’s soccer team is currently suing the United States Soccer Federation for “purposeful gender discrimination” in an effort to gain equal pay, according to The News York Times.