The ultraconservative, Sharia-law nation of Qatar is funding a propaganda channel similar to BuzzFeed and gets liberal millennials to echo anti-American content.

AJ+, or Al Jazeera Plus, frequently uses its platform as one of the largest viral video makers on Facebook to criticize America as homophobic, racist, anti-worker, plagued with violence and repressive to women.

Yet Qatar, the Middle Eastern nation that bankrolls AJ+, is legitimately oppressive with laws prohibiting homosexuality and abortions. It also uses slaves and is highly restrictive about who can and can’t enter and leave the country. (RELATED: Al Jazeera Gets Twitter To Silence Critics Of Its Video Implying Jews Benefited From The Holocaust)

“This is sort of like France protesting that Pakistanis drink too much wine, to have Qatar protesting the West for things that are outright illegal in Qatar,” a researcher with the Committee for Accuracy in Middle East Reporting in America, Gilead Ini, told The Daily Caller News Foundation.

“This is a regressive outlet of a regressive regime putting on a sham progressive accent,” he continued. “It’s clear hypocrisy and it’s the Emir’s attempt to create a channel of communications with young Americans to feed them messaging that they feel helps Qatar.”

Here are some examples of recurring themes on AJ+’s feed:

It is illegal to be gay in Qatar, and gay sex is punishable with seven years in prison. But Qatar-owned AJ+ is apparently concerned about America’s mistreatment of transgender people.

At least nine trans women have been violently killed in the U.S. in 2019. All of them were Black. Here’s how the community is responding. pic.twitter.com/Y8fdIsqrrx

In a video regarding a bill in Washington, D.C., that would decriminalize sex work, AJ+ quoted one person who said “trans women of color” in America “often face a lot of obstacles including “racism, sexism, transphobia.”

Abortion is illegal in Qatar. Doctors who provide abortions and women who have them can face five years in prison, according to Women on Waves.

But AJ+ is very concerned about access to abortions in the U.S.

These trans people don’t conform to the binary of male or female. Here are their abortion stories. pic.twitter.com/1IP9vQybs1

This 16-year-old Alabama activist wants young people’s voices to be heard, especially when it comes to issues like abortion and climate change. pic.twitter.com/idhT97kuTv

The Trump admin announced it will no longer fund medical research by government scientists using tissue from aborted fetuses.

Fetal tissue was used in research that led to the development of vaccines for rubella and rabies, and drugs used to treat HIV.

Actor Busy Philipps gave a powerful speech about her decision to get an abortion in Arizona when she was 15. pic.twitter.com/ywQ9WBgfHT

Qatar imports Nepalese and Indian labor and works them in the hot sun for about a dollar a day, with workers dying at a rate more than one per day, according to a Guardian investigation. “The tragedy of 1.7 million migrant workers trapped in Qatar defines modern-day slavery,” the International Trade Union Confederation said in 2015.

Some 1,200 laborers are said to have died after being forced to work in inhumane conditions, the BBC reported, noting that when the British broadcaster tried to report on labor rights in Qatar, its journalists were arrested. The group International Observatory Human Rights said that toll could rise to 4,000 dead by the time construction on Qatar’s World Cup stadium is completed.

That didn’t stop AJ+ from emphasizing labor disputes in other countries.

In Qatar, foreigners can’t immigrate unless they have a job lined up and can’t return home without permission from their employer. Foreigners who owe money to locals are imprisoned. But Qatar has Americans echoing a line that their own country is too restrictive when it comes to immigration.

Qatar had a system called “kafala,” which prohibited foreign workers from leaving Qatar unless their employers gave them permission. Employees who had debts or were otherwise on bad terms could be trapped in the country. Under pressure from the United Nations and as part of its quest to host the World Cup, it has begun to roll back the system.

As the liberal publication ThinkProgress wrote, “Migrant workers are thus shut out of any means to negotiate for better pay or conditions or seek better wages with a different sponsor … Which means that those who find themselves working in harsh conditions could find themselves trapped within Qatar’s borders, with no choice but to maintain their indentured servitude.”

But Qatar has weighed in on America’s immigration policy. 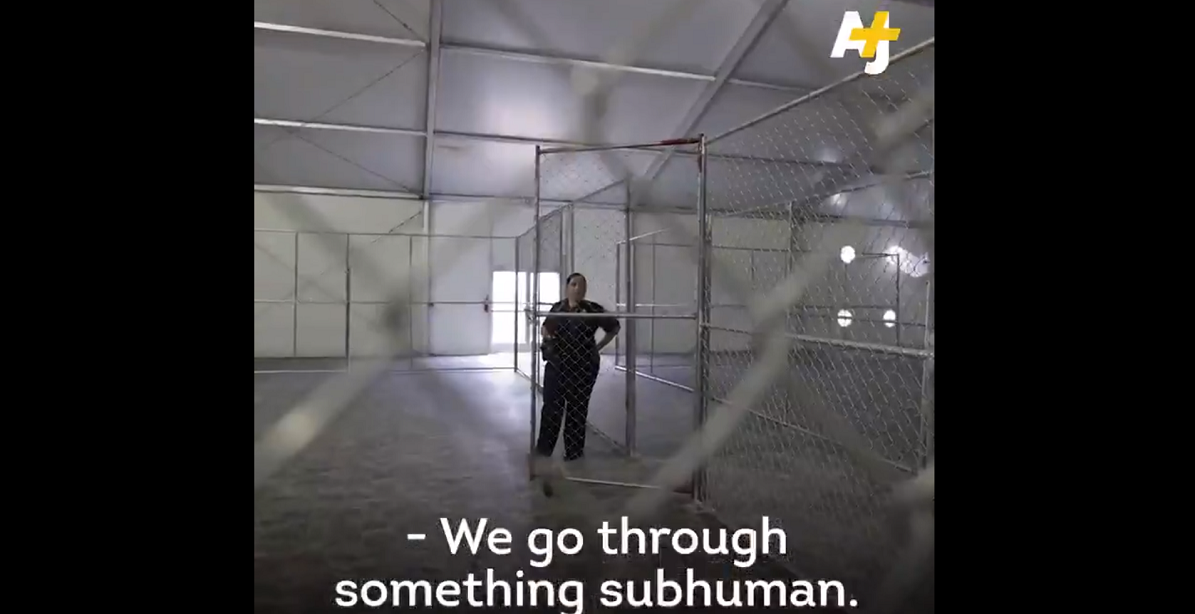 It quoted a Guatemalan migrant who called America’s treatment of immigrants “subhuman.”

This is how asylum seekers spend their first nights in the U.S: sleeping on the floor, without access to bathrooms, and with limited food for their kids. pic.twitter.com/f6H9mMqrCy

Americans who have spent time in Qatar described it to TheDCNF as a near-police state, where the Criminal Investigation Department commonly spies on people and phones are assumed to be tapped at all times.

Yet AJ+ frequently paints America as militaristic and authoritarian while fashioning itself as a voice of young progressives. It weighed in on a local race, saying a new mayor had been “accused” of being “pro-police.”

Lori Lightfoot was elected to office for the first time as Chicago’s first Black woman and openly lesbian mayor.

She’s also been accused by progressives of being pro-police. Here’s what you need to know. pic.twitter.com/qspQb4ir16

ThinkProgress reported: “Qatar operates under strict, Wahhabi-influenced Sharia law which attaches harsh criminal penalties to such things as alcohol consumption (forbidden in all but a few venues) and anything that might be termed an ‘illicit’ sexual practice.”

80% of women in jail right now are moms, and Black women are strikingly overrepresented. pic.twitter.com/zuLwnChM9a

Though nominally a news agency, AJ+ doesn’t shy away from reaching back decades into America’s past to find fault.

Can you imagine living on an island that was bombed for decades by the U.S. military? Well, that happened on Puerto Rico’s island of Vieques, and resident Robert Rabin says he has cancer because of it. Join us to ask Robert anything on @reddit in r/IamA tomorrow at 9a PT/ 12p ET. pic.twitter.com/QwoQiQTYCB

Al Jazeera did not return a request for comment, but after publication of this article, Andrew Koneschusky, a public relations man hired by AJ+, responded on their behalf. (Koneschusky previously worked as a Capitol Hill staffer to Rep. Anthony Weiner and Sen. Chuck Schumer before working for a crisis communications firm and representing the government of Kenya.)

He said “AJ+ English is a U.S.-based, editorially independent digital platform that highlights human struggles and achievements and other stories at the intersection of art, culture and social justice. Our content is driven by, and responsive to, the interests of our audience, as any digital platform must be in order to be successful, create meaningful engagement and grow a following. Our content runs counter to societal norms in the country in which our parent company is based precisely because we are independent and audience-driven.”