A Missouri elementary school principal was placed on paid administrative leave Wednesday after responding to a tweet from gun-control activist David Hogg.

Dr. Chad Searcey sent a tweet Tuesday responding to a video that Hogg, a survivor of the Parkland Florida school shooting, had posted advocating $50 million for CDC/NIH gun research funding, according to Fox4.

Searcey responded with a picture of himself and his sons shooting guns and used the hashtag #Merica.

He had deleted the tweet, his Twitter account, and had been placed on paid leave by the Platte County R-3 school district — where he has worked for 14 years — by Wednesday. 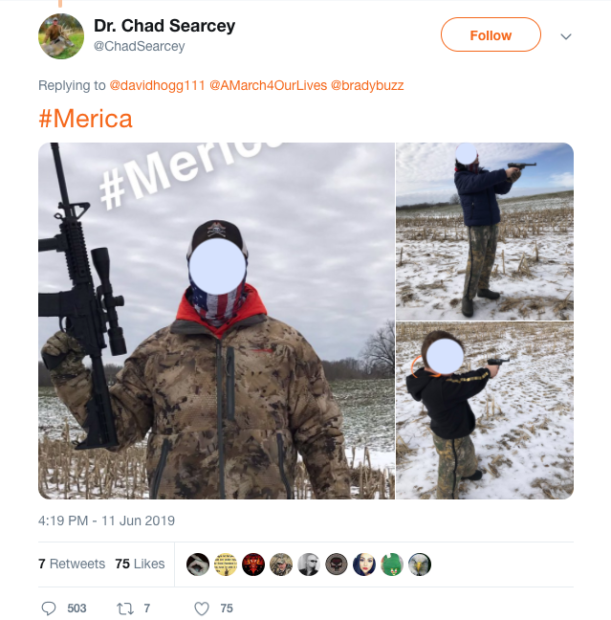 Mom’s and dads getting to see their kids graduate high school alive.

Kids not having to step over bloodstained sidewalks on their way to school.

Parents not coming home to find their child with a self inflicted gun shot wound. https://t.co/lPxJSBUejN

“The District learned of the tweet today and immediately placed the employee on paid, administrative leave while we investigate the situation,” said the Platte County R-3 School District in a statement obtained by Fox4. (RELATED: David Hogg Leads Laura Ingraham Boycott Over A Tweet)

Parents weighed in on both sides regarding Searcey’s post.

“I think he should be forgiven,” Rachel Casaos said to Fox4. “Some things are unfortunate, but he’s an amazing principal who’s very compassionate and kind.”

“I mean, he has the right to have guns and go shoot them with his family. But to post something like that on a serious subject like that is very insensitive,” Melanie Lillard said. “I don’t know if he should come back or not.”

The district has not confirmed the duration of Searcey’s leave, nor did it or Searcey immediately respond to The Daily Caller News Foundation’s request for comment.