Acosta’s book, “Enemy of the People: A Dangerous Time to Tell the Truth in America,” which was released earlier this week, details his tenuous experiences covering the Trump administration. (RELATED: Acosta Issues Warning To ‘Conservative Media’)

In Annalisa Quinn’s review of the book for NPR, she criticized the White House correspondent for using the publication “as an opportunity to relitigate his spats with the White House rather than to meaningfully interrogate the cultural shift that left huge numbers of people despising and fearing the press.”

In “The Enemy of the People,” Acosta sounds less like a reporter than a rival athlete: “We beat Trump!” Acosta remembers shouting after the lawsuit. Later, he writes, the “Trump people … had clearly gotten spanked.” The tone throughout is jocular and self-congratulatory. Describing a Trump confrontation, he writes that another reporter was “the real hero” of the news conference for defending Acosta, something you only say if you believe you are, in fact, the apparent and obvious hero.

In one of the most infamous confrontations between Trump and Acosta, the White House correspondent continued to ask the president questions at a press conference in November despite Trump having already addressed another reporter. Acosta refused to give up the microphone when a White House intern tried taking it from him.

The debacle escalated later when the White House opted to revoke Acosta’s press credentials in response to the “incident,” but they were ultimately reinstated following an injunction. (RELATED: CNN Sues The White House Over Jim Acosta’s Revoked Press Credentials) 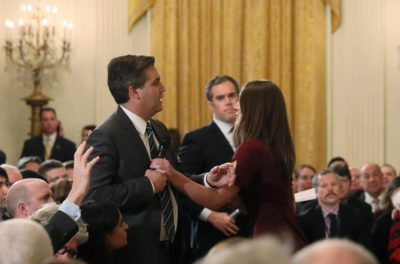 A White House intern reaches for and tries to take away the microphone held by CNN correspondent Jim Acosta as he questions U.S. President Donald Trump … (REUTERS/Jonathan Ernst (Picture 9 in a sequence of 15)

Quinn continued, “Reporters become part of the story when the president attacks them. But in between absorbing abuse and hitting back is another option: fighting for access, challenging the president on lies and reporting the facts the way you would with any other story. Acosta seems to believe that the attacks give him special dispensation to offer his personal opinions and that doing so is even an act of bravery or public service.”

Last month, The Guardian published excerpts from Acosta’s book where he admitted to “grandstanding” and “showboating” while adding, “Neutrality for the sake of neutrality doesn’t really serve us in the age of Trump.”