The Columbia Journalism Review, widely considered an arbiter of the journalism profession, published a piece from left-wing activist Jared Holt earlier this week purporting to expose a “smear campaign” by researcher Dr. Eoin Lenihan. In the process of reporting the piece, however, Holt himself committed several violations of common journalistic practice that editors at CJR either overlooked or gave a pass.

Lenihan’s original study and follow on analysis marshaled evidence from Twitter networks to show that several journalists had disturbingly close relationships with antifa groups, which are known for violence, deplatforming and doxing. He then wrote an article for Quillette publicizing his findings. The central claim of Holt’s piece was that Quillette didn’t properly vet his study, which would indeed be troubling if true. But it’s not.

“The CJR piece is not a critique, it’s more of a hit piece,” Lenihan told the Caller. He has a doctorate in education, but came to fame on the internet as the man behind a progressive parody account, Progressive Dad. That account was shut down by Twitter in 2018 over a tweet mocking a white nationalist. His personal Twitter account was shut down shortly after he named prominent journalists who write about antifa as enthusiasts of the group.

Lenihan told the Caller his work is under review for publication in the peer-reviewed journal Social Networks, which prevents him from making the details public. But he did provide editors at Quillette with all of the data and a draft of the paper that is under review, so they could vet it before publishing the story. Editors at Quillette confirmed they received the study. (RELATED: Biden Gets A Pass For His Sons Ties To China, Ukraine)

“Given Mr Holt’s connection to a hyper partisan organization and his history of cynical political journalism, we don’t fault others for not engaging with him,” Quillette founder and editor in chief Claire Lehmann told the Caller. “As expected, the piece meant to ‘fact check’ Mr. Lenihan’s writing failed to do so and in fact made a number of factual errors itself.” 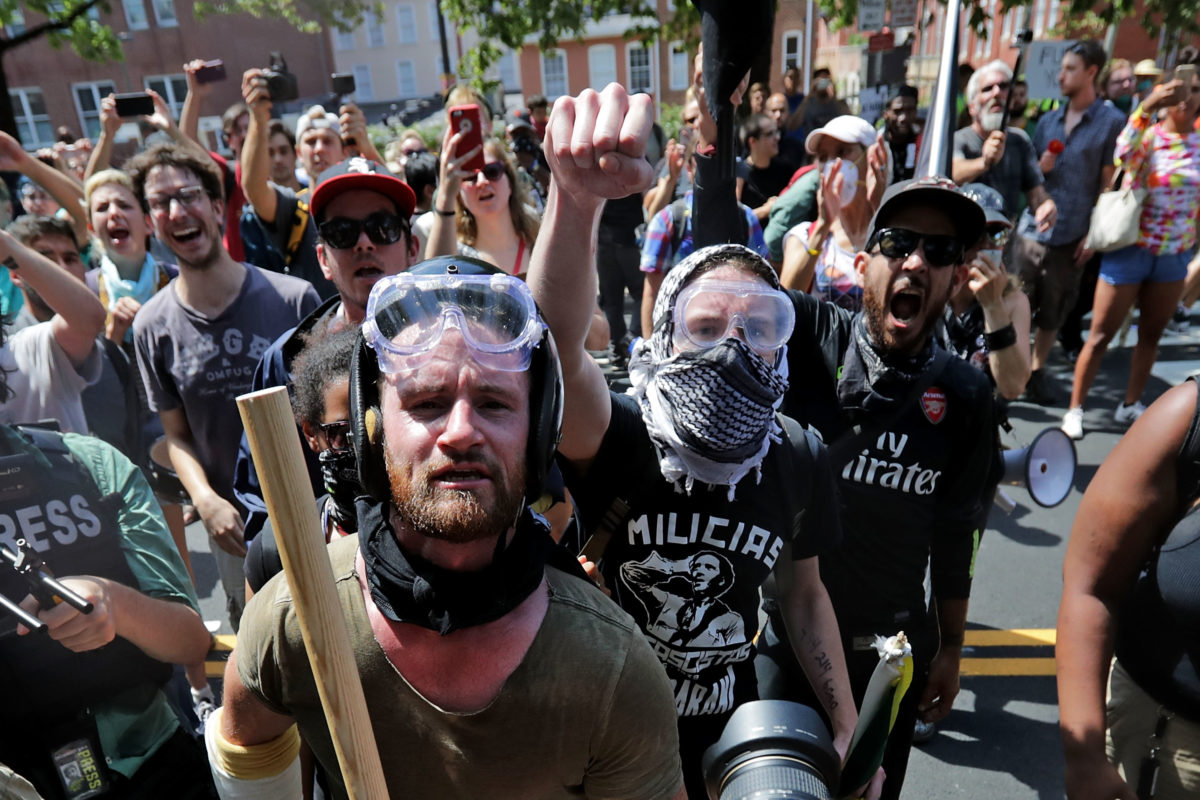 Anti-fascist counter-protesters wait outside Emancipation Park to hurl insluts as white nationalists, neo-Nazis and members of the “alt-right” are forced out after the “Unite the Right” rally was declared an unlawful gathering August 12, 2017 in Charlottesville, Virginia. (Chip Somodevilla/Getty Images)

CJR declined to defend its decision to publish Holt, who works for the liberal activist organization People For the American Way as an investigative reporter at Right Wing Watch, and also declined to comment on its own processes for vetting and editing Holt’s story. CJR is a media watchdog published by the Columbia University Graduate School of Journalism, and describes itself as an “intellectual leader” of reporters. “It is the most respected voice on press criticism, and it shapes the ideas that make media leaders and journalists smarter about their work,” its website states. Both CJR and People For the American Way have received money from George Soros’s Open Society Foundation. Holt also declined to comment. (RELATED: CJR Chooses Sides In Transgender Athlete Debate)

The CJR piece contains errors in fact, misleading and erroneous characterizations of Lenihan and his work, and baseless attacks on the outlets that reported its existence. Holt sought information from Lenihan, then left the important parts of his responses out, according to screenshots of their email conversation obtained by The Daily Caller. Importantly, the e-mails show that Lenihan told Holt that he shared his data with Quillette, but that point didn’t make it into Holt’s article.

Holt says the Quillette article, and the coverage of Lenihan’s research by RedState and others, is “the latest example of unreliable information circulating rapidly through an ecosystem of fringe outlets without even the appearance of due diligence.” In fact, Quillette did do due diligence, they just refused to talk to Holt about it.

Holt also characterizes Lenihan as a “far-right” troll who is not qualified as an extremism researcher. He omitted entirely Lenihan’s professional work on extremism, writing instead that Lenihan has no association with any “previously known” organization that researches extremism.

Here’s how Lenihan described his work in an email to Holt:

“Alongside my doctorate I have been investigating left and right extremism since 2016. In 2016 I was hired by a left-leaning charity to create a set of curriculum documents for educators that present interventions for those at risk of drifting into online far-right extremism. At the moment I am involved with a research centre into far right extremism and I am designing a platform for their curriculum documents. I also study the far left. Antifa specifically. I have been interested in them since 2018 when I spoke on the topic at the Konrad Adenauer Stiftung in Berlin. I am scheduled to present the finding of our Antifa study at an international extremism conference this summer.”

None of this made it into Holt’s article. In response to Lenihan’s answers to his questions, Holt wrote, “Thanks Eoin, I’ll include your responses in our article.” But the vast majority of what Lenihan told Holt did not make it into the story. 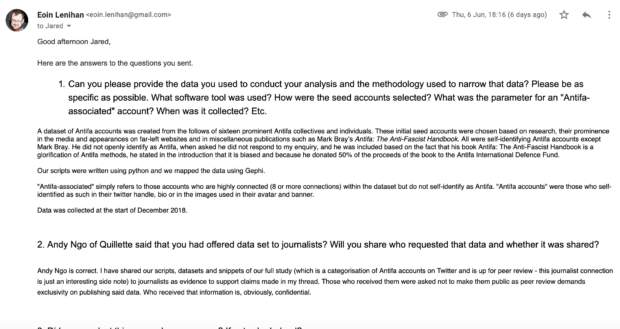 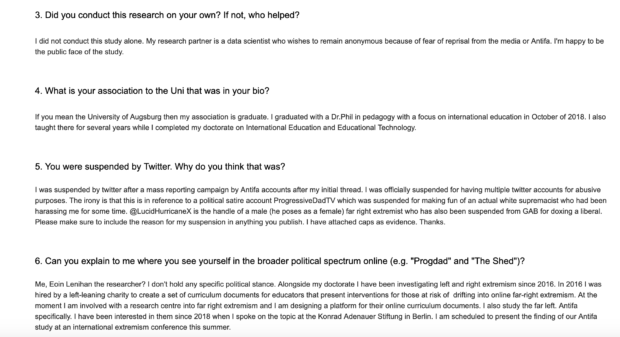 Holt also insinuated that Lenihan was hiding something, because he did not specify which journal was considering publishing his study. But Lenihan says he was never asked.  The screenshot below confirms that the article is under review by the journal Social Networks:

As for the charge that Lenihan is “far-right,” it is an accusation that Lenihan disputes, and one that he told Holt he disputes. The only evidence cited by Holt is a vague reference to Lenihan getting banned from Twitter for violating its terms, and the fact that a Nazi publication approved of and circulated his findings. It is a guilt-by-tenuous-association standard that has become favored among political operators on the far left, and CJR did nothing to vet the characterization and offered nothing but opacity to the Caller’s queries on the matter.

Holt also claims someone posted a video on YouTube titled “Sunset the Media,” which splices together images of mass shooters with some of the journalists identified in Lenihan’s study, but does not link to the video. Upon request, CJR refused to share the YouTube video with Lenihan. The video was, as of this article, nowhere to be found on the web.

Lenihan told the Caller he reached out to CJR for more information about the video when he saw it mentioned in the CJR piece, but was told by editor Samuel Thielman, “We don’t share our reporters’ underlying work with the subjects of our stories.” Thielman told Lenihan he and the managing editor at CJR had seen the video. Lenihan doesn’t believe it exists. (RELATED: PBS Tackles Abortion Debate In Frontline Documentary — And Gets It Right)

In an email exchange with Holt, Lenihan said he doesn’t operate from a particular political stance, and has been researching extremism on the left and right since 2016. He described his parody account as aimed at poking fun at outrage culture on the left and the right, and said his Twitter accounts were banned over a tweet making fun of a white supremacist who had been harassing him.

“Please make sure to include the reason for my suspension in anything you publish,” he told Holt. “I have attached caps as evidence.” The screenshot Lenihan included in his response to Holt is below, and backs up his version of events.

Holt also omitted the tweet, which does not appear to favor his version of reality. 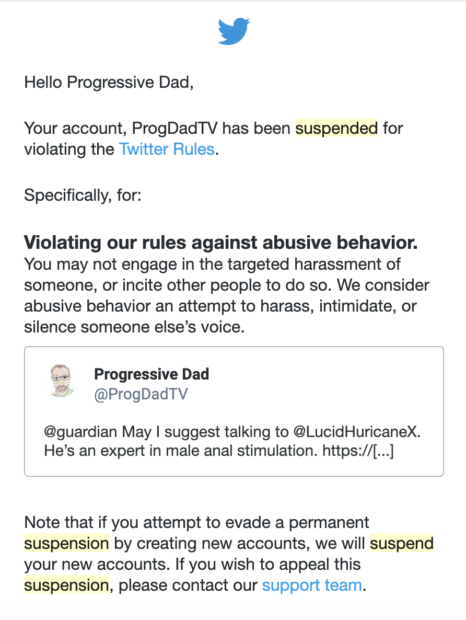 Holt also did not include Lenihan’s response about his political views, or evidence Lenihan provided to back up to the assertion that his account had fans on the left and right. He simply labeled Lenihan “far-right.” Neither CJR nor Holt responded to questions about Holt’s lack of evidence for the “far-right” label in the piece, or whether they distinguish right from far-right.

There are more problems with Holt’s piece. He quotes a social media researcher extensively and cites a guide to news industry best practices in order to characterize the conservative outlets who wrote about Lenihan’s work as uncritical journalists. The insinuation was that those outlets reported on his study at face value, without bothering to vet it.

“For conservative media, the endorsement of peers within its narrow confines is all the expertise necessary for publication,” he wrote. This claim, which he supports in the piece only by stating that several outlets declined his requests for comment, contradicts what Lenihan told Holt in the email, and doesn’t hold up to further scrutiny.

As already noted, Quillette reviewed the entirety of his work prior to publishing, albeit on the condition that they not republish it. Lenihan also told Holt he had provided a number of reporters with more information at their request. Holt’s sweeping assertion that these stories are “the latest example of unreliable information circulating rapidly through an ecosystem of fringe outlets, without even the appearance of due diligence,” is not grounded in facts. (RELATED: New York Times Invents New Term To Sanitize Abortion)

Holt devotes just one sentence in the piece to a description of Lenihan’s methodology and ignores the lengths Lenihan went to in the Quillette post and in his emails to Holt to explain and qualify his study.

“His methodology consisted of labeling Twitter users as ‘highly connected’ to antifa if they had ‘8 or more connections’ on Twitter to either accounts run by antifascist activists, or one lecturer at Dartmouth,” Holt wrote. 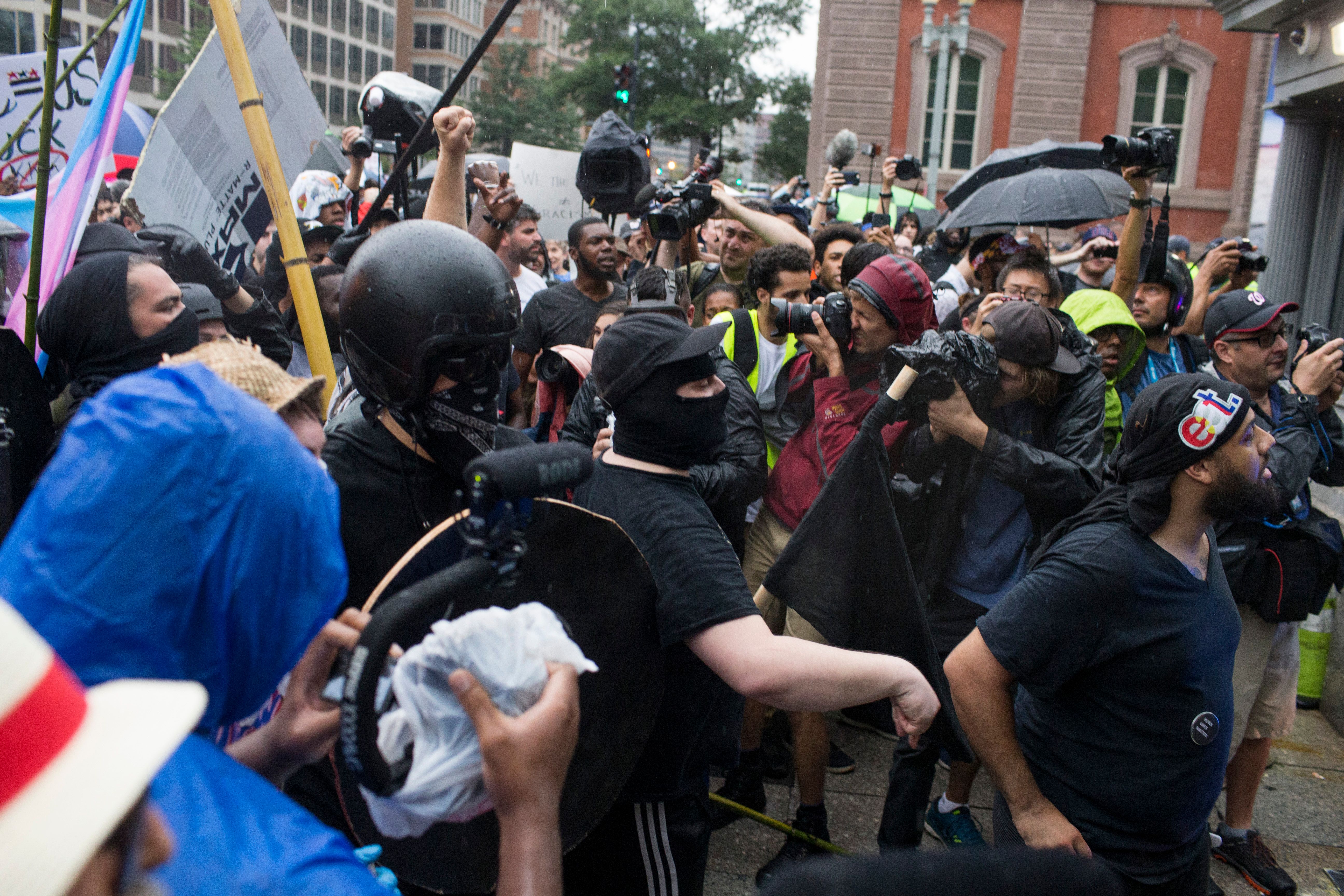 Antifa and counter protestors to a far-right rally attempt to block the exit from Lafyette Square before Unite the Right demonstrators leave in Washington, DC on August 12, 2018. (ZACH GIBSON/AFP/Getty Images)

He was careful to note in Quillette that, “A journalist’s close social-media engagement with any particular group should not be seen as incriminating per se.” The network mapping was used as a jumping off point to later analyze certain journalists. Lenihan manually reviewed the reporting of the journalists shown to be the most connected to antifa. What he found was striking.

“Of all 15 verified national-level journalists in our subset, we couldn’t find a single article, by any of them, that was markedly critical of antifa in any way,” he wrote in Quillette. “In all cases, their work in this area consisted primarily of downplaying antifa violence while advancing antifa talking points, and in some cases quoting antifa extremists as if they were impartial experts.”

Again, Holt’s piece includes none of this context.

The problems with the piece are severe in any case, but really stand out as endorsed by the nation’s supposed top arbiter of journalistic ethics. It’s the second time in a month that the self-described media watchdog has published a liberal activist. The first, Media Matters editor Parker Molloy, openly advocated against journalism norms, and here in the second, Holt flouts them. In both cases, CJR has refused to engage questions about their work, or to talk about their editorial process.