President Donald Trump once sent his former communications director, Anthony Scaramucci, to the presidential doctor after displaying signs of being sick aboard Air Force One.

The visit resulted in “the Mooch” receiving a penicillin shot on his behind, and it subsequently became one of his “favorite” White House stories from his short-lived 11 days of service. 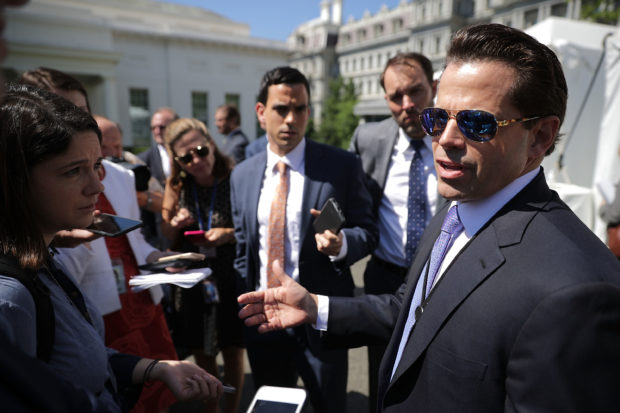 From the April 2018 NYU Local report:

Asked about his favorite White House story during the Q&A portion of the evening, Scaramucci recalled an anecdote of a time while aboard Air Force One. Trump, a notorious germaphobe, noticed Scaramucci had a hoarse voice and was under the weather. Trump, Scaramucci said, subsequently sent him to his doctor, Ronny Jackson (now Trump’s nominee to be the new VA Secretary), who proceeded to inject him in the butt with penicillin and cortisone before he could return to sit alongside Trump during the flight.

The president is a self-admitted “germaphobe” who called handshaking “one of the curses of American society” in his book “The Art of the Comeback.” (RELATED: Boris Johnson Hung Up On President Trump — Here’s What Happened)

An outtakes-style exchange saw Trump ask his chief of staff, Mick Mulvaney, to leave the Oval Office during a coughing fit that occurred during the president’s interview with ABC’s George Stephanopoulos.