Superstar rocker Dave Mustaine, known for his work with Metallica and later Megadeth, announced Monday that he has been diagnosed with throat cancer.

The 57-year-old singer/guitarist shared in a statement with Variety that the diagnosis is “clearly something to be respected and faced head on — but I’ve faced obstacles before.” (SLIDESHOW: These Women On Instagram Hate Wearing Clothes) 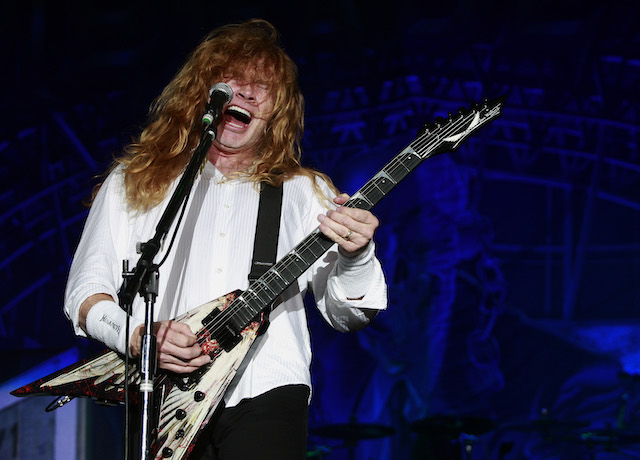 Dave Mustaine of U.S band “Megadeth” performs at the Rock in Rio Music Festival in Lisbon May 30, 2010. REUTERS/Hugo Correia

“I’m working closely with my doctors, and we’ve mapped out a treatment plan which they feel has a 90 percent success rate,” he added. “Treatment has already begun.” (SLIDESHOW: 71 Times Samantha Hoopes Stripped Down)

In the same statement on Megadeth’s website, he announced that “most shows” for the planned summer tour to celebrate the group’s 35th anniversary were being canceled and that the Megacruise event in October would be affected due to Mustaine’s news. (RELATED:Michael Irvin Annouces He’s Cancer-Free: ‘Thank You All For Praying’)

“Unfortunately, this requires that we cancel most shows this year,” the statement read. “The 2019 Megacruise will happen, and the band will be a part of it in some form. All up-to-date information will be at megadeth.com as we get it. Megadeth will be back on the road ASAP.”

“Meanwhile, Kiko, David, Dirk and I are in the studio, working on the follow up to Dystopia – which I can’t wait for everyone to hear,” he added. “I’m so thankful for my whole team – family, doctors, band members, trainers, and more. I’ll keep everyone posted. See you soon, Dave Mustaine.”

The rocker got his first big break in the music industry when he joined Metallica in 1981. Two years later, he was kicked out of the band and in 1984 formed Megadeth with Dave Ellefson.